About the Family-Friendly Movie Wonder

Just as the holidays approach and we are filled with gratitude for our loved ones comes a memorable movie, Wonder, for the entire family, that will transform the way we think about everyone who crosses our path.

The inspiring movie, Wonder, based on the 2012 bestselling book of the same name by R.J. Palacio, is about a 10-year-old boy named August “Auggie” Pullman who was born with severe facial birth defects. As a result, he has needed subsequent multiple surgeries, which have kept him from attending school with his peers. He is happy at home, and comfortable with his close inner circle who accept him, embrace him, and refuse to judge his differences.

Getting him out of his comfort zone and homeschooling environment, his mother, Isabel, decides it is time for Auggie to attend school for the 5th grade, leading him into unchartered territory on an unexpected journey. 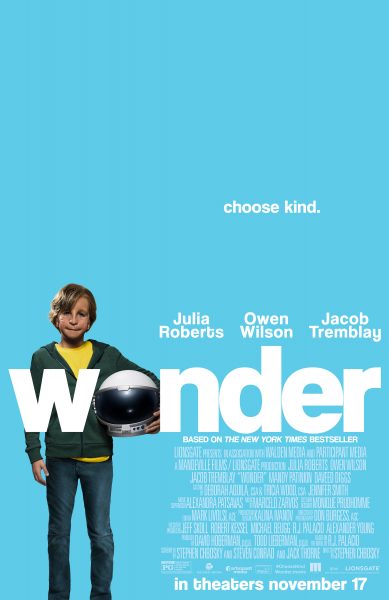 The highly emotional film, from Lionsgate, is about a brave boy, who has always wanted to be just an ordinary kid, but his teenage sister, Via, keeps reminding him that “you can’t be ordinary, when you were born to stand out.” This is a science-loving boy who once found solace inside a space helmet, who truly loves Halloween because he doesn’t stand out. But suddenly he faces a whole universe of gawking kids, who don’t yet know how to treat him.

Played by 11-year-old Jacob Tremblay, best known for his stunning performance in the 2016 movie, Room, we instantly fall in love with Auggie, and embrace the important life lessons that his story teaches us.

After Stephen Chbosky first read the book, Wonder, he knew he couldn’t walk away from directing this compelling coming-of-age story for this generation, about a boy with both challenges and great undiscovered gifts. The writer/director read the 2012 bestselling book by R.J. Palacio shortly after his son, Theodore, was born, and becoming a parent for the first time made the story extremely personal to him and his family.

“What struck me most in the book is that the sum of every choice you make creates your character,” Chbosky explained during a recent visit to Philadelphia. “You alone can make the choice to be a hero in your life – to stand out, to be yourself, and to act on your best nature.” Chbosky, a native of Pittsburgh, is a writer, director, and producer. He wrote his first coming-of-age novel, The Perks of Being a Wallflower, and subsequently directed the 2012 film version starring Emma Watson and Ezra Miller. His book and movie, The Perks of Being a Wallflower, quickly became cult favorites because of the relatable story of an introverted high school freshman, who is taken under the wings of two seniors who welcome him to the real world. Chbosky also directed the recent Disney film musical Beauty and the Beast, starring Watson, Dan Stevens and Josh Gad; which received critical acclaim and was embraced by children and parents around the world. Palacio, the author of the book Wonder, recently explained that she eagerly handed over her trust in the material to the film’s director because of his own rare gifts. “Stephen brought so much artistry,” she said, “but he also brought a great deal of respect for the words.” The author added that she hopes that “fans of the book will see that Stephen went out of his way to honor the book’s characters – big and little – and they are in there as I imagined them,” she said. “He brought something vital: that key feeling in the book that I call laughing/crying at the same time.” Why do you feel that the book, Wonder, and now the movie, is so identifiable?

Stephen Chbosky:  There is a parents’ point of view that is very well served; however, for the kids, everyone knows what it’s like to feel like the odd person out.

What about this movie is touching such a chord with people?

SC:  Well, I think it strikes at the vast majority of people who would like to believe there’s some good in the world and see it in their own families and see it in their own lives. I believe that this movie reflects that. Plus, it’s really funny and entertaining, and it doesn’t take itself too seriously, and it doesn’t preach. It just tells a good human story, and Auggie’s a great underdog character, as are, honestly, most of the people around him.

Talk about Julia Roberts, Owen Wilson, Jacob Tremblay; what do each of them bring to this movie?

SC: I think they all bring such a mixture of wonderful acting talent with true humanity.  Julia and with Owen bring such a sense of humor and such warmth, and Jacob Tremblay, he’s one of the best child actors not only in modern movie history, but one of the greatest ever. The rest of the cast is amazing as well. Thank you. We have incredible performances from Mandy Patinkin as Mr. Tushman, the school principal, Daveed Diggs as Auggie’s teacher, Mr. Browne.

And that is not all…

SC: Yes, and Izabela Vidovic, who plays [Auggie’s sister] Via, should not be overlooked because she’s terrific, too. We wanted to have the family feel like a real family, with all the warmth and the tough moments as well, and we got very lucky with casting. Julia Roberts as “Isabel” and Owen Wilson as “Nate” in WONDER. Photo by Dale Robinette.

Was there a little bit of a mother-son bond going on there with Julia Roberts and Jacob Tremblay?

SC:  Yes. Absolutely. I’ll never forget that one scene where Auggie, after the first day of school, cries and says, ‘They won’t even talk to me.’  I remember they each were there for one another and I remember Julia, off camera, really making the atmosphere very supportive and very loving so that Jacob could go to those places that he is quite capable of going to.

Talk about the journey of the movie; was this kind of an easy-going set?

SC: I didn’t think we could make a movie about kindness without doing it with kindness. Also, I’m a big believer in having a great work environment. I just don’t like yelling around me, so I want to save the drama for the screen. I also have a philosophy about leadership, which is, that I want everyone that works with me to leave better than they came; and that’s the cast, that’s the crew, and that’s everybody around me.

What can we say about bullying as it pertains to this story and this movie?  I feel like walking away from reading the book and seeing the movie, it opens up a whole new discussion for us.

SC:  I think that her book will be taught in schools for many, many years. One thing that I love about this movie, this book and this story, is that it’s being brought into the schools and that parents can use this as a teaching lesson of, something as simple as ‘Hey 30 years from now, if you are a boy do you want to be remembered as a Jack, a Will or a Julian?’ referring to the different children in Auggie’s class. Daveed Diggs as “Mr.Browne” in WONDER. Photo by Dale Robinette.

Do you want to add anything else to the discussion of bullying?

SC: This genuinely is not a problem that we have to put up with; this isn’t political, and it’s not something we are a divided country about. It is simple, with a bit of parental or teacher’s guidance, we could help with this.

So, there’s a lot of messages here. When you were adapting the book, what were the most important aspects of the story to tell?

SC:  I think the short answer is everything that you saw because I made sure it was all in there. I love this book! I think this book is a classic, and I think it will be a classic for decades to come.

SC: I felt that my job as the adaptor [of the novel] was to keep everything that was essential and to keep the heart and the vision of the characters, to only make cuts or only make consolidation moments when it was absolutely necessary, not only did I know that it would help the pacing of the movie along for the younger members of the audience, but also it gave me a little bit more real estate to show what mom was feeling on the first day of school or to show Auggie going up to his dad after a difficult time in school.

So, do people get a variety of life lessons, different messages from this movie? There are so many; the lessons of kindness, empathy, and acceptance, which I believe we all need in our lives, especially with all of the turmoil that’s going on in the world.

SC:  I think for me, we all know that life sometimes can be a struggle, and humor is the primary way that people deal with it. I know I have done this my entire life, and it makes everything more fun, my whole life, doesn’t it? If we just felt badly all the time it really wouldn’t be such a great life and so yeah, to me, I usually go humor first and then I let the sad things take care of themselves.

I hear that this movie was a family event for you and the author of the book.

SC: Yes, the one thing that was really fun making the movie is that all of our kids are in the movie. R.J.’s kids are in the graduation scene right behind Izabela Vidovic, who plays Via, and my daughter plays little Via. So, the whole movie was a true family affair.

Do you know what you’re doing next?

SC:  I just finished my second novel, a week and a half ago.

SC: I can’t say, it’s a secret. It’s basically done. It will be published in a year or so…

Can you say anything about it?

SC:  I can tell you that it’s probably very unexpected based on my previous work.  I’m a devout Stephen King fan, and I love his epic horror novels, and I’ve always wanted to write one, but I also needed it to have a lot of heart.  So, that’s what I wrote.

It’s been such a pleasure.

SC: Keep being a “Wonder” to everyone around you. Wonder is now playing in theaters after opening on November 17, 2017.

Coming soon Debra Wallace’s follow up article about Wonder with interview from Wonder Author R.J. Palacio. You can also read Debra’s Wonder movie review in this article, The Wonder Movie Teaches Us That Kindness Counts.

For information, show times and tickets please go to: www.wonder.movie