We are updating this frequently for Thursday’s Philadelphia Eagles Parade.

What a game last night! We were on the edge of our seats. The constant back and forth of the score might have made for an exciting football game but it also has us anxiously sitting on the edge of our seats. You may remember the Super Bowl bet we made. (Click here to read all about it.) We had more on the line than just who won the game. ;-) When the clock finally ran out we were ecstatic that the Eagles defeated the Patriots, 41-33. Now comes time for the Philadelphia Eagles parade. Philadelphia Mayor Jim Kenney announced that the Birds’ victory parade would take place on Thursday, starting at 11 a.m. 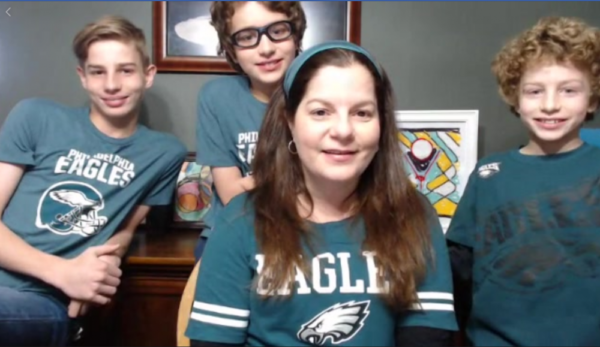 UPDATE: We’ll include below a listing of New Jersey school districts closed due to the Eagles Victory Parade. 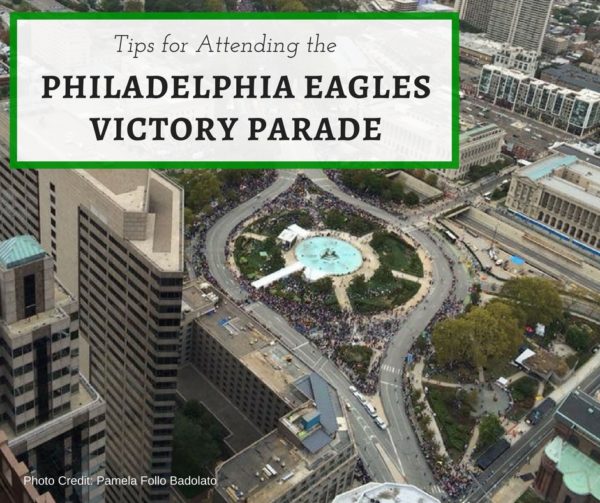 Any of our fans joining us for the Philadelphia Eagles Pep Rally at the Borough of Collingswood Community Center? #JerseyFun #Eagles #Collingswood @philadelphiaeagles

2/7/18 5:00 pm UPDATE: NJ Transit has suspended AC Rail Line ticket sales to Eagles parade. In other words, if you have not purchased your New Jersey Train ticket to Philadelphia 30th street station they are no longer available. You will not be able to board the Atlantic City to Philadelphia NJ Train line without a ticket. More details can be found here.

• MAJOR UPDATE: From 3:45 A.M. to 5:45 A.M. (Westbound) and from 3:43 A.M. until 6:17 A.M. (Eastbound), PATCO trains will only service the Lindenwold, Woodcrest, Ferry Avenue, Broadway and 9th/10th and Locust Street Stations. From 6:00 A.M. until approximately 1:50 P.M., PATCO will provide WESTBOUND ONLY Service, originating at the Lindenwold, Woodcrest, Ferry Avenue and Broadway Stations. Trains departing from these stations will EXPRESS directly to the 9th/10th and Locust Street Station. During this period, there will be NO EASTBOUND Service.

GOING TO THE PARADE

In other words if you are going to the parade using PATCO between 6 am and 1:50 pm. You can only go INTO the city using the Lindenwold, Woodcrest, Ferry Avenue and Broadway Stations. These trains will go to DIRECTLY to 9th/10th and Locust Street station.

LEAVING FROM THE PARADE

From about 1:20 P.M. until 8:00 P.M., PATCO will transition to EASTBOUND Only Service. You will ONLY be able to go out of the city. PATCO trains will begin at 9th/10th and Locust Street Station and stop at Broadway, Ferry Avenue, Woodcrest and Lindenwold Stations.

Click to view the PATCO train schedule and parade alert. Regular fares apply for all customers age five and older; children four and under ride free.

Due to extremely strong sales of advance tickets, PATCO announced today that ticket sales will be SUSPENDED at or around 7:00 P.M. TONIGHT or earlier if ticket supply is exhausted. In addition, tickets will NOT BE SOLD in stations on Thursday.

Individuals who have purchased advance tickets, as well as FREEDOM Card holders are strongly encouraged to arrive at their departure stations – Lindenwold, Woodcrest, Ferry Avenue and Broadway – early to ensure that they are able to board trains for service into Philadelphia.  All ticket and FREEDOM Card holders are reminded that, based on projected crowds, having a ticket does not guarantee service.  Ticket holders who are unable to board will receive full refunds.

• SEPTA is operating a special Eagles Parade schedule with details available online at SEPTA.org. SEPTA says rides on the Market Frankford Line and the Broad Street Line will be FREE all day to get people to and from the parade route, sponsored by Independence Blue Cross.

I do recommend traveling through 30th Street Station. This Philly train station offers bathrooms, lots of dining options, and free wi-fi; all things that will come in handy if you should find yourself waiting for trains.

Parking during the Eagles Parade

Again, visitors should not drive into Center City. If, however, driving is necessary, the City encourages drivers to park in off-street lots and garages along the Parkway, Broad Street, or near the stadium complex.

PARKING IN HISTORIC DISTRICT  Take advantage of parking in the Historic District to avoid the road closures at the Philadelphia Parking Authority’s AutoPark at Independence Mall garage located beneath the Independence Visitor Center. Entrances are located on 5th and 6th Streets between Market and Arch Streets.

The parade route will begin at Broad Street and Pattison Avenue and continue north, eventually making its way to the Philadelphia Museum of Art. When more details become available we will share them here.

Starts at Broad and Pattison in South Philadelphia at 11 a.m.

-Northbound on 16th Street to the Benjamin Franklin Parkway

-Westbound on the Benjamin Franklin Parkway to Eakins Oval

My recommendation for the best spot to see the Philadelphia Eagles Parade – If you have young children, find a spot around the Logan Circle where you can view the parade. The parade route goes through the Logan Circle. The Academy of Natural Sciences and The Frankin Institute are both located on the circle as well but they WILL BE CLOSED. Even if you can’t go inside the museums you can still get in some great photo opps with the props out front.  The Franklin Institute also has lots of steps that may be available for sitting on to watch the parade. The hotels can be a good space to run in for a bathroom break or warm up for a few minutes. After the parade, enjoy the museums while traffic clears out of the area.

You can view the Eagles Victory Parade maps for road closures, parade route, traffic information and more as a pdf at this link. 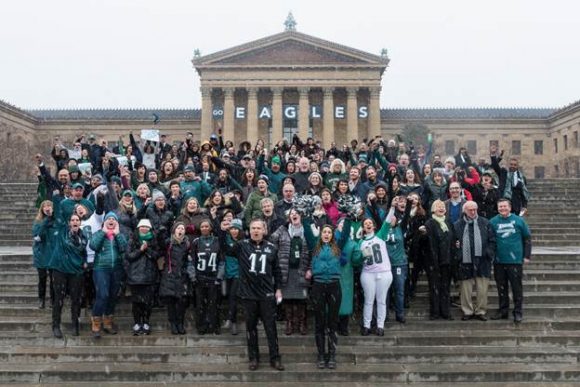 Museum staff gather on a snowy January morning in a show of pride for the home team in advance of Super Bowl Sunday. Photo courtesy of Philadelphia Museum of Art, 2018. Photo by Joseph Hu

From the New Jersey Department of Health

More than two million people are expected to attend the Super Bowl champions’ victory parade in Philadelphia on Thursday. If you plan to join them, remember that a severe flu season is underway. Take steps to protect yourself and others:

This just in! For families that want to be a part of the Eagles Parade action without having to be at the parade, check out this fun event being held at the Garden State Discovery Museum! Wear your Eagles green and get $5 off admission to the party! 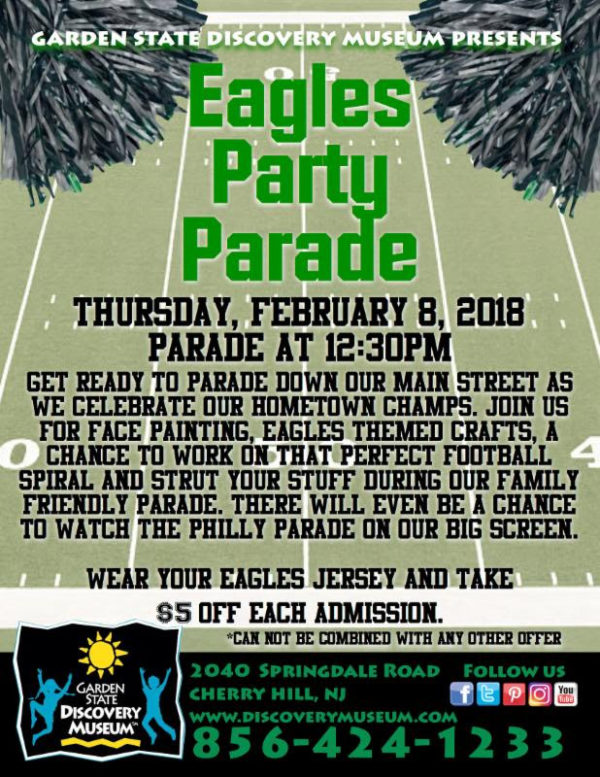 Staying safe with kids during the Philadelphia Eagles Parade

• Dress in similiar colors/matching shirts or hats. Wearing your Eagles green is NOT going to be enough to stand out in a crowd of Philadelphia Eagles fans. Get matching hats or scarves in a bright bold color so you can easily identify each other.

• Let your older kids and teens have their smartphones. Encourage them strongly to not use it while waiting for the parade. Instead they should conserve the battery. In case, you are all separated they can use their phone to get in contact with you. Make sure they either know your number and you theirs or program the numbers into each other’s phones.

• There will be Philadelphia Fire Department medical tents along the parade route: -24th Street & Benjamin Franklin Parkway (south side) -21st Street & Benjamin Franklin Parkway (north side). Make note of where they are and show them to your kids. Take missing or lost persons to either of the medic tent locations listed above or notify a Philadelphia Police Officer immediately. Identify the Alpha-numeric “location markers” that will be posted along the Benjamin Franklin Parkway to clearly and easily identify a location or section (by letter and number, example: CD-1). Use them to communicate with first responders in the event of an emergency or with each other should you get separated.

• Point out to your kids where the first responders and police are. Show them what they look like and go over what your kids should say and do if they get separated from you. Remind your children that while the police and first responders will likely move from spot to spot, they should all look the same.

• Make sure each child has your contact information on them. Even older kids and teens can get flustered and panic if they can’t find you. They may forget their number and your name even. Better that they have it on them. Write down your phone number on your child’s arm (and cover with liquid band-aid so it doesn’t rub off), a bracelet, or a slip of paper in their pocket.

• Take pictures of each person in your party with each phone or camera you have. It will be easier to remember what someone was wearing or to describe your child to a police officer if you can also share a picture and not have to rely on your memory alone.

Any missing people or children the Philadelphia Police Department come into contact with will take to one of four points along the parade route:

You can watch the Eagles Parade on NBC. The celebration will air live on NBC10 and NBC Sports Philadelphia. It will also stream on NBC10.com and NBCSportsPhiladelphia.com.

This just in! For families that want to be a part of the Eagles Parade action without having to be at the parade, check out this fun event being held at the Garden State Discovery Museum! Wear your Eagles green and get $5 off admission to the party!

If you’re taking the day off to watch the Philadelpia Eagles Parade it would also make a great day to explore things to do with your kids in Philadelphia. Take a look at some of our suggestions for Philadelphia attractions. We’ve got the details on what is and isn’t closed as well.

Things to do after the Philadelphia Eagles Parade

PARKING IN HISTORIC DISTRICT  Take advantage of parking in the Historic District to avoid the road closures at the Philadelphia Parking Authority’s AutoPark at Independence Mall garage located beneath the Independence Visitor Center. Entrances are located on 5th and 6th Streets between Market and Arch Streets.

Click over to see the rest of our Family Travel to Philadelphia series. 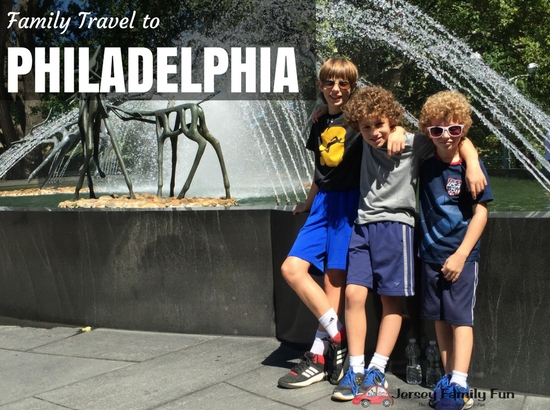 55 thoughts on “Tips for Attending the Philadelphia Eagles Parade”