I love a parade! The marching bands, the colorful floats, the commemoration of an important event or occasion. But there is no parade I love more than the Macy’s Thanksgiving Day Parade. It’s a holiday morning tradition in my family no matter what the rest of the day’s plans involve. The smells of the turkey being prepared, or mom-made cinnamon buns for breakfast, the sounds of the marching bands and Broadway performers, there’s no better spot on Thanksgiving morning than cuddled on the couch watching the elaborate floats, talented performers, and high flying balloons. For us, the Christmas season didn’t begin until Santa waved at you through the television screen from the street outside Macy’s.

Please know Jersey Family Fun participates in online affiliate marketing programs that allow businesses to earn referral fees by placing affiliate links to products for sale on their own websites. You’ll notice some of those links below as we tell you about great products that tie into the parade floats. We may earn a small commission from your purchase that get invested back into Jersey Family Fun. This does not affect your price.

Now back to those new floats at the Macy’s Thanksgiving Day Parade. 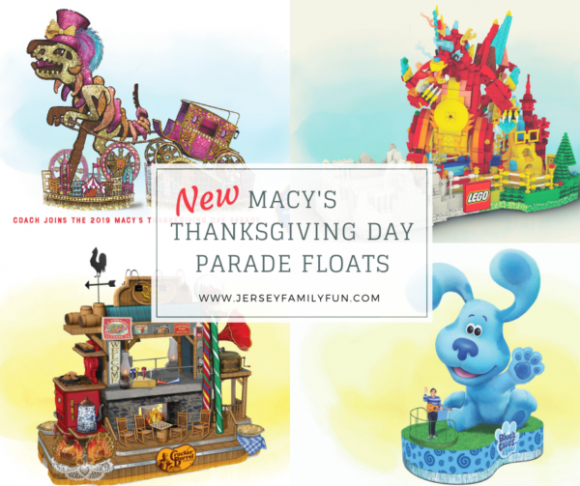 Blues Clues & You Float at the Macy’s Thanksgiving Day Parade

Blues Clues has a special place in my heart for how much my daughter loved them in her younger years! Built to promote the new series on Nickelodeon, Josh, that lovable puppy will be cruising the streets of New York as a giant inflatable. Joining the float will be the new host of the show, Josh Dela Cruz! 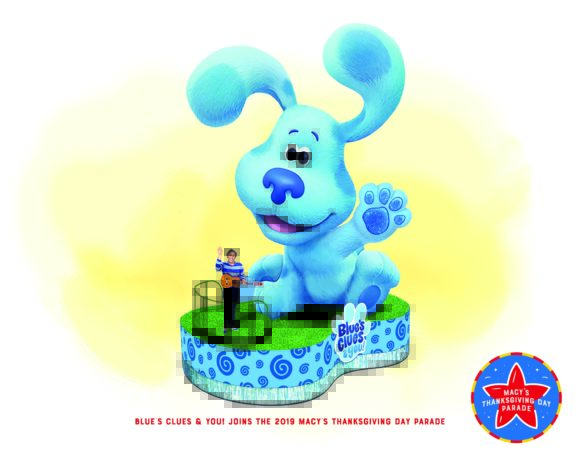 Oh boy are there going to be some HAPPY kids this Thanksgiving morning to see their favorite toys become giant size in the new Brick-changer float by the LEGO Group! A giant part dragon-part turkey will be inspiring creativity on Thanksgiving morning as South Korean boy group NCT 127 performs on the LEGO float. While you can’t buy this Lego dragon-turkey in stores, you can buy a Lego turkey or a Lego dragon an Amazon. 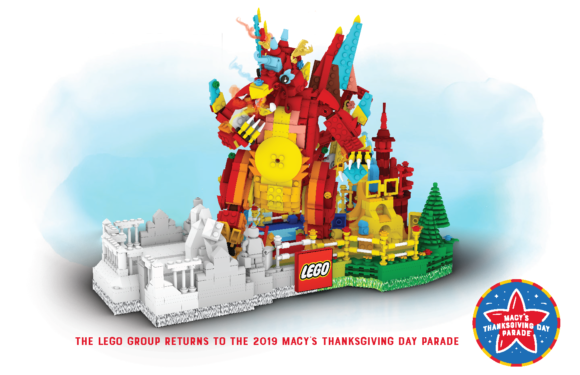 Yummy Cracker Barrel, a staple for so many traveling families, is a perfect addition to this holiday of travel and satisfying meals. The float incorporates the Cracker Barrel staples of the hearth, the peg board game and the rocking chairs. (Get your own Tricky Triangle Game on Amazon.) I only wish it came with smell-o-vision! Tenille Townes joins the rocking chair rockers through the streets. 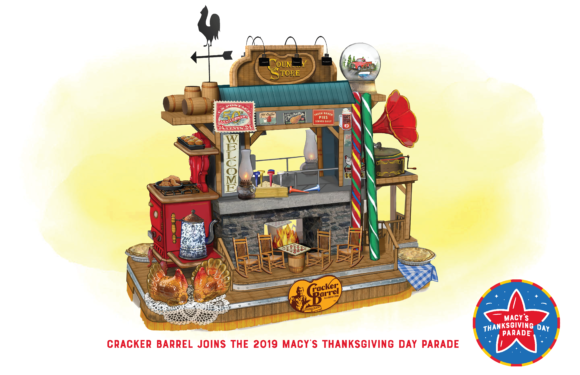 Maybe the Coach brand float is more for the moms? But not when the kiddos see this fun carnival style float with a dinosaur that reaches two stories tall! The luxury brand is the first of its kind to have a float in this historic parade and this year Billy Porter performs alongside Rexy. 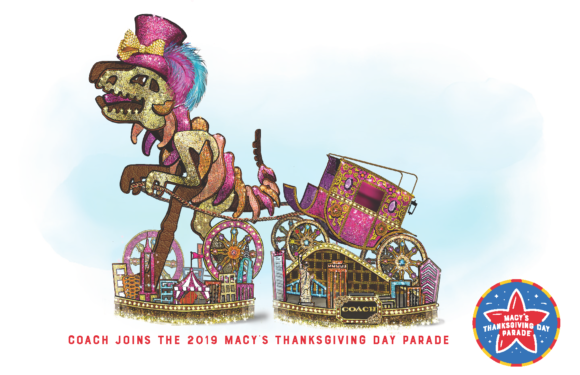 Thanksgiving is a time for thanks but also a great time for reflection, as families gather and take stock of where they are in life. The New York Life Toy House of Marvelous Milestones looks back on those important moments like graduations, marriage and retirements. Kelly Rowland graces the float with her talent, alongside the paper dolls throughout the toy house. 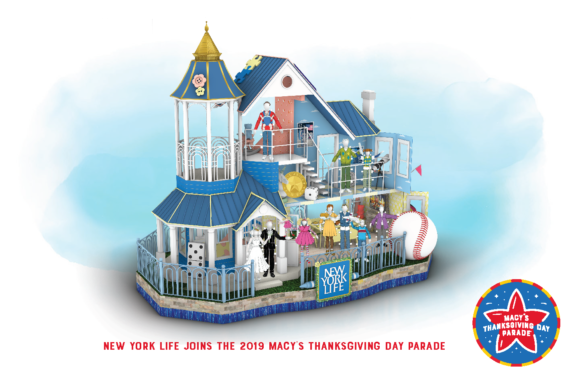 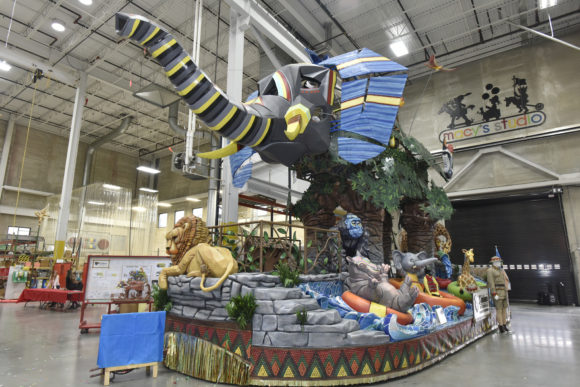 MOONACHIE, NJ – NOVEMBER 13: Splashing Safari Adventure by Kalahari Resorts and Conventions is seen as Macy’s debuts new floats for the 2018 Macy’s Thanksgiving Day Parade on November 13, 2018 in Moonachie, New Jersey. Puppeteers manipulate the articulated trunk and heads of the elephant and giraffe. (Photo by Eugene Gologursky/Getty Images for Macy’s)

If you’re a Jersey Family Fun reader, you know that my family and I are huge fans of Kalahari Resorts. When we found out last year that Kalahari would debut at this year’s Macy’s Thanksgiving Day Parade and our anticipation of this year’s parade about tripled! It was such an impressive float we are thrilled that it gets to travel the streets of Manhattan once again. Their Splashing Safari Adventure float incorporates both the waterpark and the African theme by featuring exotic animals that move, a lazy river, and a performance by TLC. The ideal spot to watch this parade would be from a private cabana at Kalahari Resorts, but we’ll be happy to see it from the comfort of our couch too (and will probably be booking our next visit when we see it). Read about our visits to the Kalahari Resorts in the Poconos.

Christmas Cheer is Near with the The Elf on the Shelf

Rise of the Teenage Mutant Ninja Turtles by Nickelodeon

The Nutcracker by Universal Orlando Resort

Diary of a Wimpy Kid by Abrams Children’s Books

Pikachu by The Pokémon Company International 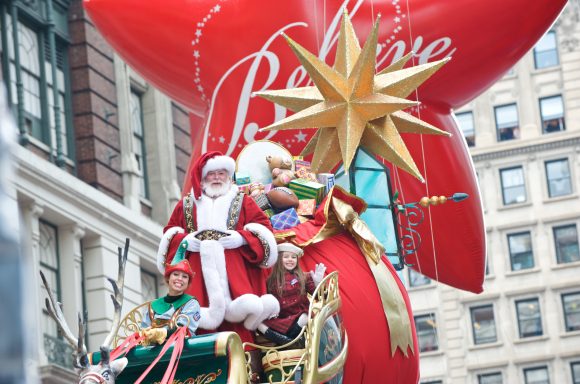 I can’t end without mentioning Santa! He’s been in the parade every year since 1933 – imagine that! He is always the grand finale of the parade route. When he waves make sure you wave back and crank up your favorite Christmas carol because the Christmas season has begun!

Tune in to the 93rd Macy’s Thanksgiving Day Parade at 9 AM on NBC on Thanksgiving morning, Thursday, November 28.

For more information about the Macy’s parade visit www.macys.com/social/parade. 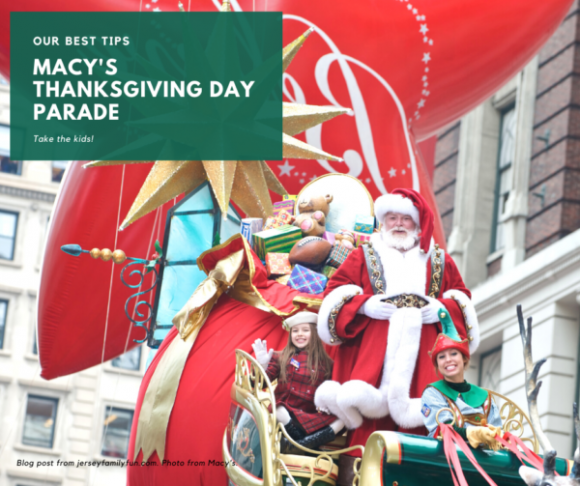