In full disclosure, we were provided with two tickets to the Tour at NBC Studios to make this article possible. We appreciate their support of Jersey Family Fun and our effort to find fun New York City activities for our readers.  As always, all opinions are our own. 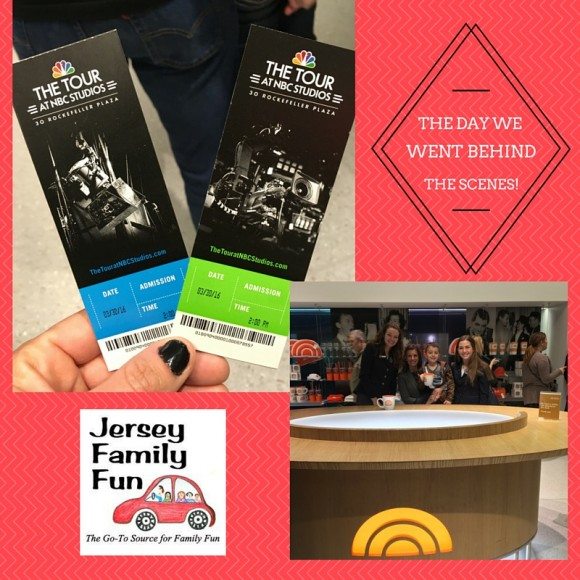 The iconic Rockefeller Center; where ice skaters glide, the most famous Christmas tree stands in December, and is only steps from Radio City Music Hall and close to Times Square. The building is an art deco beauty and houses stores, restaurants and the popular Magnolia Bakery. It’s a destination with just those features but of course, it’s also home to NBC Studios. Every weekday morning you can find a crowd hoping to have an appearance on the Today Show, and every weeknight Jimmy Fallon tapes his show on the 8th floor before a live studio audience. 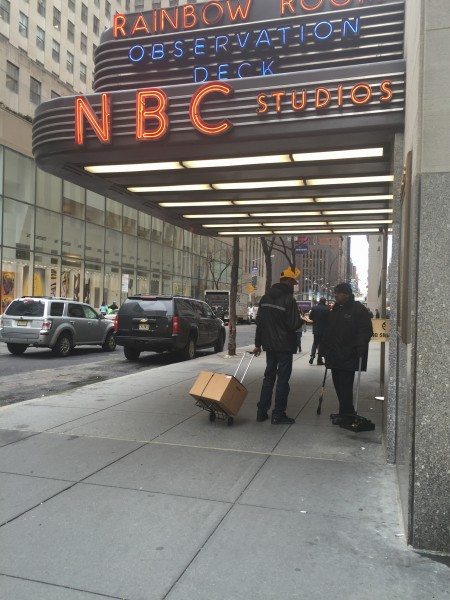 Since the 1930s NBC Studios has offered behind the scenes tours to the public. Today’s NBC Studios Tour, often called, The Tour at NBC Studios is different than in the past – even from tours you may have taken a year ago. Over the recent school break, my daughter had tickets to a Broadway show, and my son and I didn’t, so we needed something to do for a few hours nearby. In my 40 years living in New Jersey, I’d never taken a tour yet am a fan of all things entertainment (meaning, I’m a fangirl). I was ready!  I wasn’t sure a YouTube obsessed 6 year old would be as interested, but as I’ve discovered in the past sometimes if mom is enjoying herself, the kids find themselves unexpectedly having fun too. Since the minimum age is 6, I figured we’d go for it. I prepped my son by talking to him about what he’ll see, and why he should be excited for it. Tours are offered 8:30 AM – 2 PM weekdays, and 8:30 AM – 5 PM weekends; we chose a 2 PM Wednesday tour and headed to 30 Rockefeller Center after lunch.

Since last October, The Shop at NBC Studios has been relocated and updated, and is now the “home base” for all tours and studio audiences. Just inside the building at the 6th avenue entrance (the one under the Jimmy Fallon marquee), you’ll be greeted by a bright and inviting space filled with unique NBC merchandise. We arrived early and had time to sit in a chair like the ones on The Voice, and explore a desk like the one on the Today Show. The Shop is a destination in itself, with special events and more. 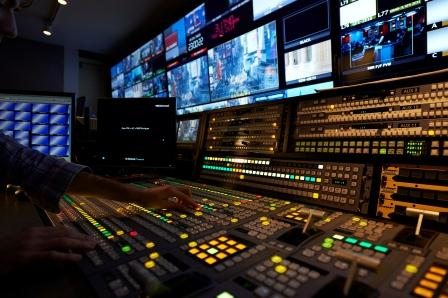 Some of what you’ll see on your NBC Studios tour

The approximately one hour NBC Studios tour begins with a security check, so travel light if you can. Also, NO PHOTOS are allowed on The Tour at NBC Studios, so leave the telephoto lens at home. Tours are run by NBC Pages – recent college graduates who also help with studio audiences, and learn about marketing and PR. We had two great young women, Dara (from Union County!) and Ella, who were upbeat, professional and completely knowledgeable. After watching a short video about the history of the NBC Studios, our tour began. The 13 of us were led through the building, up to the newly restored Art Deco rotunda. Video screens line the walls and change from a daily showing of original Margaret Bourke-White art that once hung in the space, to images of Jimmy Fallon for the waiting studio audience.

Then onto the studios! The availability of the studios is dependent on the time of day, and the show’s production schedule. We were brought to the NBC Nightly News, Saturday Night Live, and Late Night with Seth Meyers. All NBC Studios tours are guaranteed two studios, so we were lucky to see 3 on our 2:00 PM tour. Morning tours may bring you into the Tonight Show studios, and weekend tours will likely have all studios open. We had no celebrity sightings, but the excitement of being in a working studio, and walking through a working office building where you can potentially run into a celebrity or newsworthy person was fun! 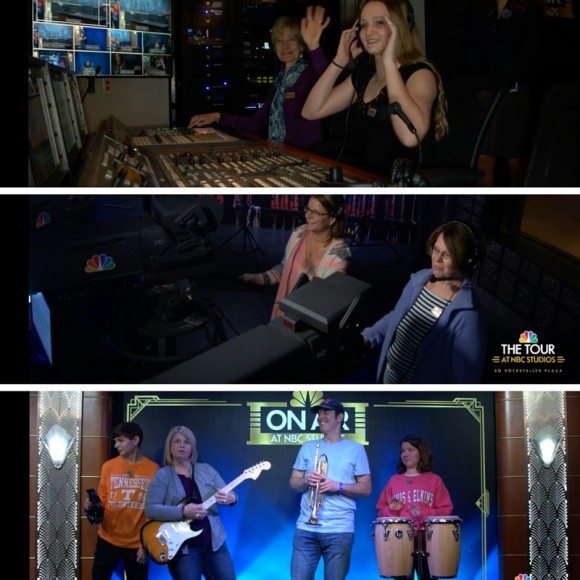 Screenshots from our 5 minute video, emailed to tour participants immediately!

We were brought to the NBC production gallery, where it got technical. The sound, graphics and more take place in these glassed in rooms, and it makes you appreciate just how much work and skill goes into any one hour program! And then, you get to do it yourself. One of the new features and fun parts of the tour is when you produce and star in your own late night show segment! Tour participants choose roles like the guest, host, band, camera operator or more, and the finished clip is emailed to you almost instantly. Here’s ours! My son and I aren’t in it because he wanted to be the audience, but there are some fun moments in the video: 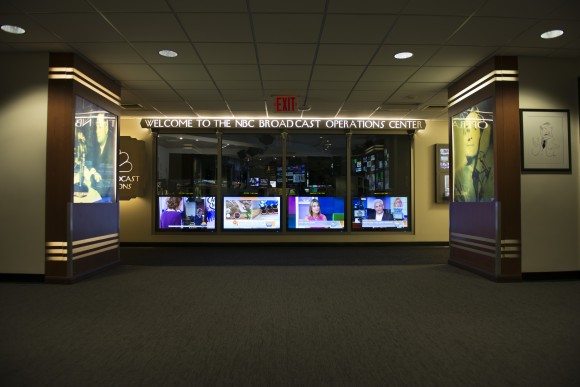 The last stop is the Broadcast Operations Center, which is the hub for how content actually makes it into your home (commercials and what plays in which time zones, etc.). The tour lasts just over an hour, and finishes in The Shop at NBC Studios where you started.

And did my son like The Tour at NBC Studios?

He did! He doesn’t watch any of the shows whose studios we entered, but no matter. There was a lot to take in with the elaborate cameras, and lights in each studio. The pages tweak the tour to be sure it suits the participants, and they engaged with him often. He enjoyed the “show” we produced, and maybe next time he would be braver and chose an on camera role.

The tour wasn’t too long, or too much walking, so he was able to stick it out physically. It would definitely be easier for my 10 year old to understand, but the exposure to a career path most of us don’t have access to is valuable. And like I mentioned, when mommy was excited, he sensed something special happening. I was most definitely starstruck sitting in the SNL studio seats and I could see him taking it all in. There are some costumes on display by the SNL stage and I promised him I’d show him some of the clips that feature the characters. As we ended our tour we passed the line of that night’s Tonight Show audience, and I excitedly told him, “These people will be on television tonight!” He definitely felt the energy in the building, and the uniqueness of what he experienced at The Tour at NBC Studios. 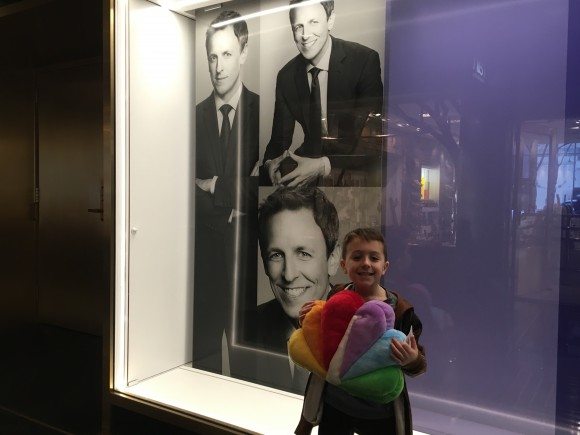 All smiles, fresh off a visit to the Seth Meyers studio!

There are of course a lot of things to do in New York City, and especially in the midtown area.  It can be hard to choose where to spend your time and money. If it’s something educational and unique that you’re looking for, look no further than The Tour at NBC Studios! Your children will have fun AND learn a lot along the way!

If you take an NBC Studios Tour:

Click over to see the rest of our Family Travel to New York City series. 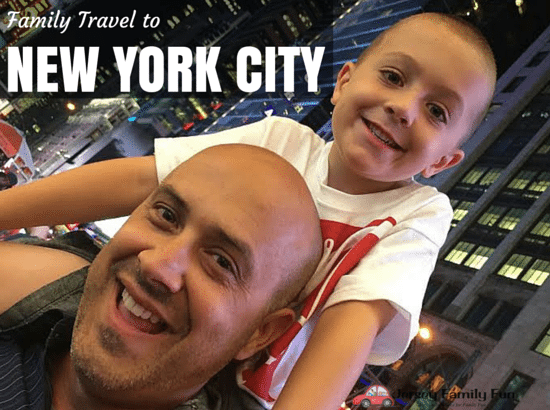 In full disclosure, we were provided with two tickets to the Tour at NBC Studios to make this article possible. We appreciate their support of Jersey Family Fun and our effort to find fun New York City activities for our readers. As always, all opinions are our own.