Michael Douglas enters our interview room. It’s almost as if he’s stepped out of a scene from the Ant-Man and the Wasp movie. Dressed in a suit, he talks like he’s about to go into a lesson on quantum mechanics but with a grin he shifts his focus. I’m relieved… I’d much rather talk about the movie and from the sound of things so would Michael Douglas. You can imagine with a career like he has had, Michael had a lot to say. He fit in a lot in our 20 minute interview including the shocking detail that he had not even seen the full movie (at that point). Today, I’m pleased to share with you those highlights and a new feature clip from the Ant-Man and the Wasp movie.

Watch this new feature clip from Ant-Man and the Wasp. 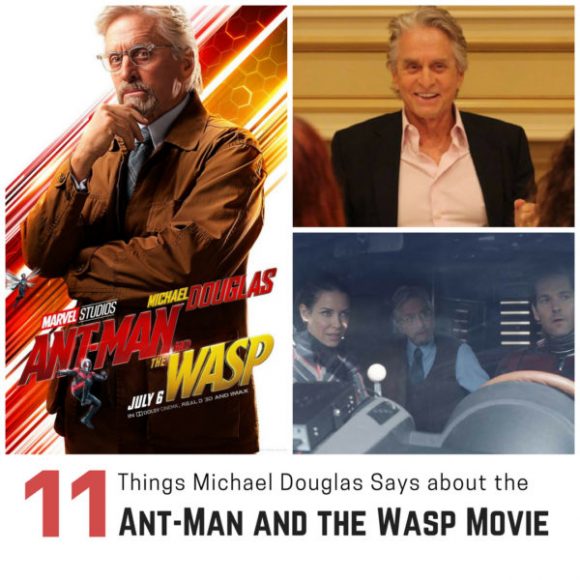 Highlights from our interview with Michael Douglas, Dr. Hank Pym from Ant-Man and the Wasp

Michael Douglas talks about the Ant-Man and the Wasp cast

In the Ant-Man and the Wasp movie, Michael Douglas’ acting is complimented by a talented group of actors including Paul Rudd, Evangeline Lilly, Laurence Fishburne, Michelle Pfeiffer, and Hannah John-Kamen. He had glowing remarks to say about working with each of them.

Paul is just a sweetheart. He’s just a great, great guy so it sets the tone. Most of my career I’ve been number one on a call sheet, the lead, and so to be in a supporting role in a picture like this, you watch how he does it, you assume a lot of responsibility. If you’re smart, if you’re the first, you set the tone. You’re the first one on the set, you make everybody else comfortable to make their best performances possible. I mean that’s just all part of the thing. So, that part was great with Paul. 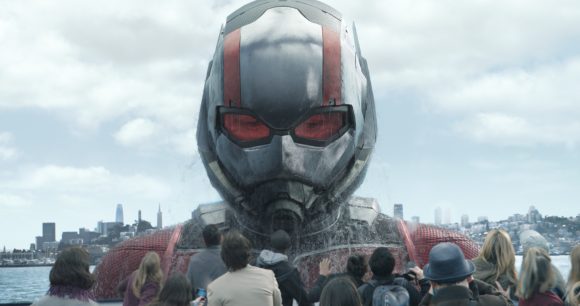 I was excited for Evangeline because if you remember the end the first one, I show her Janet’s suit. There’s this look in her eye as Hope when she sees her mother’s suit. But what I was looking at her when she was doing the scene, I saw Evangeline going I’m going to be a superhero. I could see her.  She was ready to go and excited. 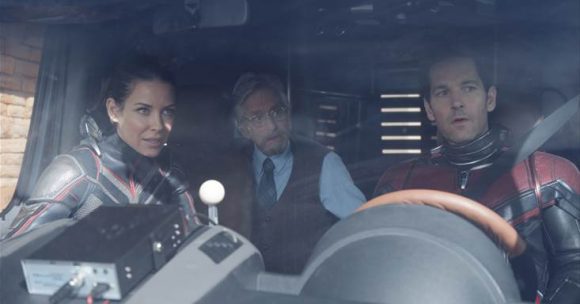 Michelle was just such a treat. I am a tremendous Michelle Pfeiffer fan. Never imagined ever getting a chance to work with her.

Larry Fishburne is quite an actor. 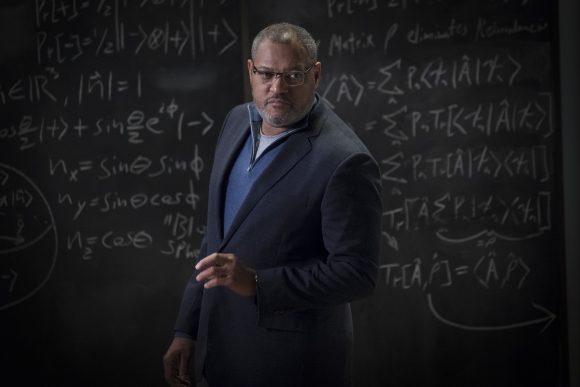 This young lady who I think you’ll be hearing a lot about is Hannah John-Kamen. They were all talking about her almost like it was a sports team. We have this great rookie, this girl, she’s fantastic. And she really is. She’s wonderful. 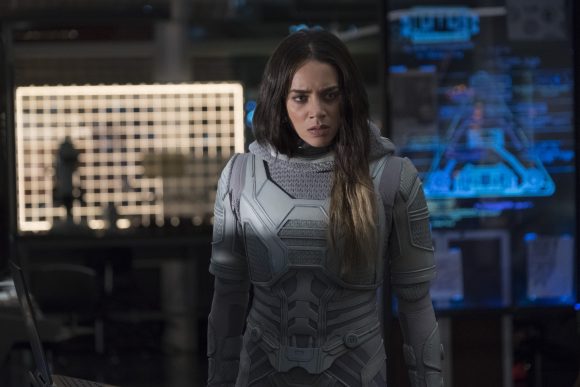 About returning to the Marvel Studios Ant-Man films

Michael Douglas plays an important part in the Ant-Man movie series. Both movies revolve around a mission he needs accomplished. We talked with him about what it was like to return to the set with the cast, suit up again, and to looking 30 years younger on screen.

Getting back together with the Ant-Man and the Wasp cast

There’s just an inherent relaxation and joy normally about a sequel. You don’t have to introduce yourself again. You know each other. There’s a comfort factor which makes it much easier.

Suiting up as the original Ant-Man

I was a little disappointed with the first one, (Ant-Man). I kind of reluctantly looked whimsically at how good everybody looked. Paul looked great and everything else. I got my old suit back up (and thought) so if this continues … if you get big or small they might make you young, I might as well get back in there again. 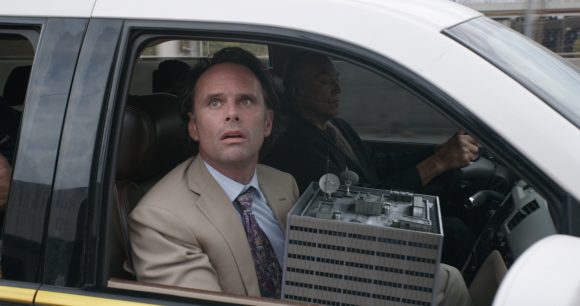 Technology and the rebirth of the PYM Labs

Last I remember, the PYM laboratory got demolished. But I must have put a lot of money away. (We laughed right along with Michael on that one) I must’ve put a lot of money away. I’m thinking about all of this covert that we deal with now and all this covert intelligence operations with countries stealing our secrets and this and that. I must’ve had some really high, high classified tools in there. I loved it. It was just staggering. It was absolutely stunning, one of the most beautiful sets I’d ever seen. Our production designer, he’d done a fantastic job.

Michael says of seing himself 30 years younger in the Ant-Man and the Wasp movie, “It cracks me up. It just cracks me up, you know. I’ve never done any of these pictures before. The last one was the first green screen film. It’s just a whole other world. I’ve got a whole new appreciation for actors who can act when there’s nothing there. I mean it may be just basic bottom terrain but you’ll sit in these huge studios with green walls all around and this and that and Peyton (executive director) telling you, ‘okay, the asteroids coming in here. Look up here’, this and that. You’re afraid you’re going to be embarrassed. Then you see it put together and (you know) they know what they’re doing.” 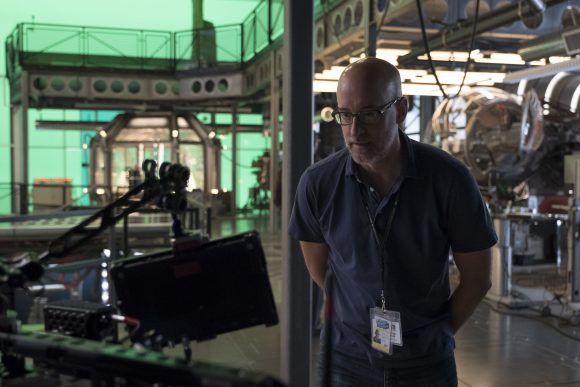 About offscreen laughter and antics

With an acting cast lead by Paul Rudd we suspected there had to be moments of unbridled laughter on the set of the Ant-Man and the Wasp movie. When another blogger asked about that I was surprised about Michael Douglas’s response.

As far as cracking up, we watch it. I mean when you feel it bubbling up, we don’t let it go there. Because sometimes what happens is it’s hard to pull it back. Then you can lose a lot of time. With Paul it’s difficult because he ad libs so much. I’m a little jealous of Paul because I’m kind of carrying the story line, you know and having to go home to research about what the hell I’m talking about and all of this. Paul will just come in with some one-liner and steal the scene. He’s unpredictable, wonderful and funny. So, it happens a lot.

Hearing what Michael had to say though I can completely appreciate how too much goofing off could hurt a film’s budget. I can also appreciate how talented Paul Rudd must be when it comes to delivering comedy. I didn’t know that some of Paul’s scenes were created in the moment. 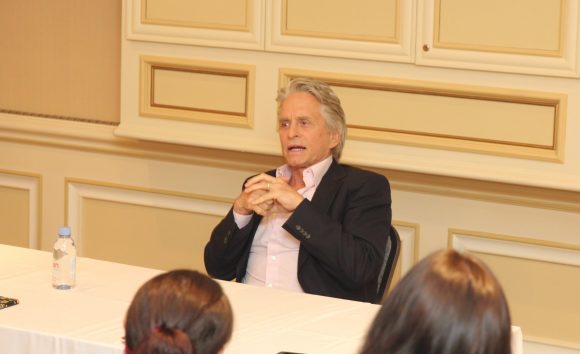 As a dad playing a lead character in the Ant-Man and the Wasp movie, I wanted to know what Michael Douglas’s kids thought about his role. So I asked and his response had us chuckling because his son was so right.

The first one was done and Dylan then was maybe 15. He came out of the movie and his arms were crossed. He’s an actor himself. He says, ‘Dad.’ I said, yeah. He said, ‘This is going to be very good for your career.’ I said, oh. He goes, ‘Dad, you don’t understand, this is going to bring a new audience for you. This will be very good.’ Dylan continued, ‘You know what?  I am recommending you do a sequel if they offer it to you.” He just got a kick out of it. It was a picture he could kind of see and it is true. I must say, I never anticipated it. I’ll be talking sometimes and I will feel something pulling on my coat, you know and I’ll look down and therewill be a little five-year-old kid saying Ant-Man. So, it does, it introduces you to a whole bunch of people who didn’t see a lot of my movies.” 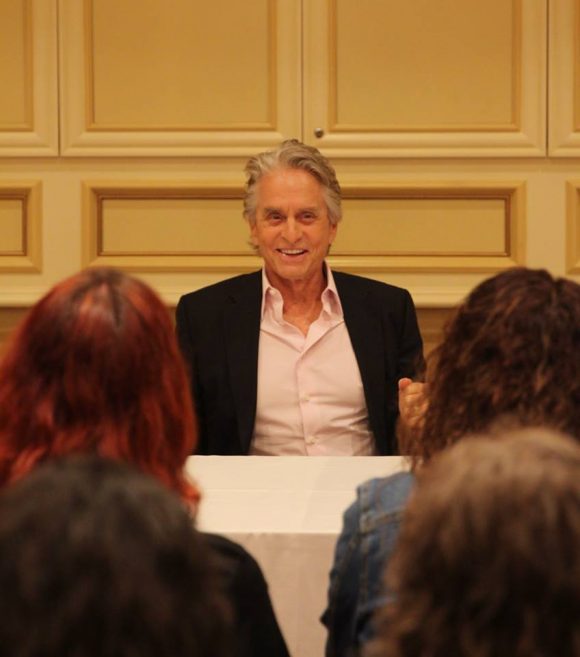 Michael Douglas has been making films for over 34 years, but we agree with his son. The Ant-Man and the Wasp movie is going to introduce him and Dr. Hank Pym to more audiences. Who knows? Maybe we’ll see the return of him and the rest of the cast in Avengers 4. 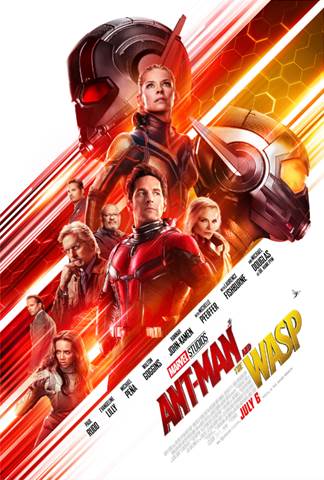 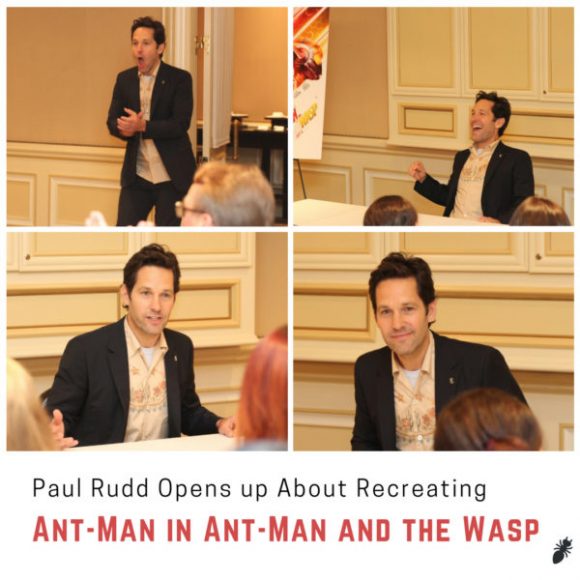