I have been sharing my most recent experiences visiting Los Angeles for the #MaryPoppinsReturnsEvent. Part of that was being involved in interviews and activities for the ABC/Disney Channel/Freeform for their 25 Days of Christmas holiday specials. This week I am so excited to be able to share with you more details about the Mary Poppins Returns movie and the talent behind the film. I’m kicking it off with details about Emily Blunt, who plays Mary Poppins. You are going to love this movie, especially Emily Blunt. Take a look at what we learned during our interview. I hope you’ll enjoy my highlights and that you’ll find Emily as perfect as I do. 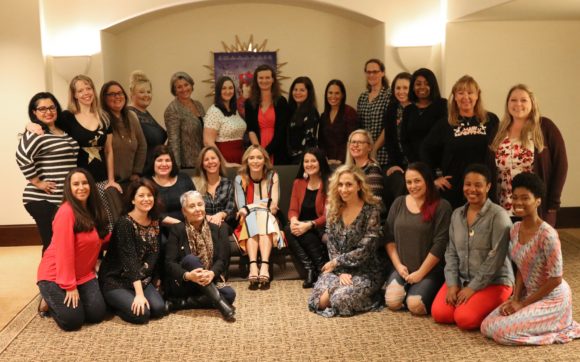 Emily Blunt enters the room for our group interview. We can’t help but give her a round of applause after her performance as Mary Poppins in Mary Poppins Returns. It was after all, practically perfect in every way. She is overjoyed to come from a stuffy room of reporters to our group of Disney bloggers who give her such a warm welcome. 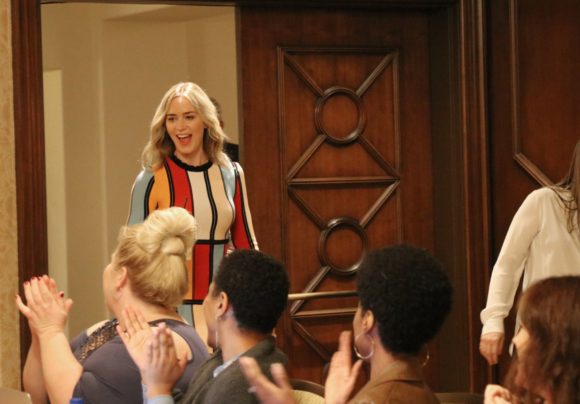 Unfortunately, these interviews go quick. We only get 20 minutes to talk with the talent behind a movie. So while we just wanted to hang out with Emily and praise her for her role, we had to get straight to it, asking Emily Blunt the questions we most wanted to know. Here are my highlights in what I like to call, Emily Blunt’s Favorite Things from Disney Mary Poppins Returns.

With all the different costume changes Emily Blunt gets to make as Mary Poppins we had to know which one was her favorite and why. While she did love them all there is one she did point out as her favorite.

I have to say I really loved the red suit with the skirt that kind of flowed out when I danced with 30 Lamplighters.  I remember Rob Marshall really wanted like a Ginger Rogers type of look to that and it’s not actually accurate for the time period to have a skirt that opened up like that.  So that’s where Sandy Powell, the great Sandy Powell created all those very tight pleats so that it looked very chic and sort of straight lined. Then when I turned the whole skirt kind of opened up and she’s just so exciting to work with, Sandy Powell. 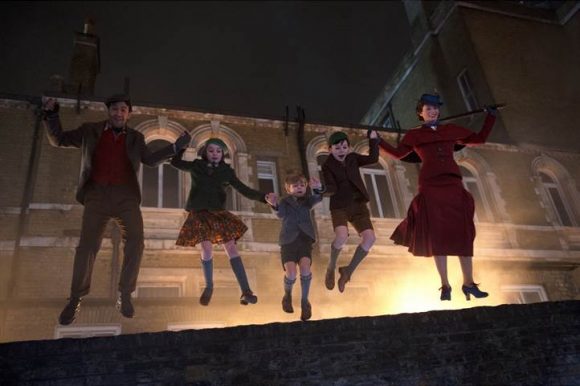 I mean all the costumes are so extraordinary but I think the red suit was pretty epic, loved it. 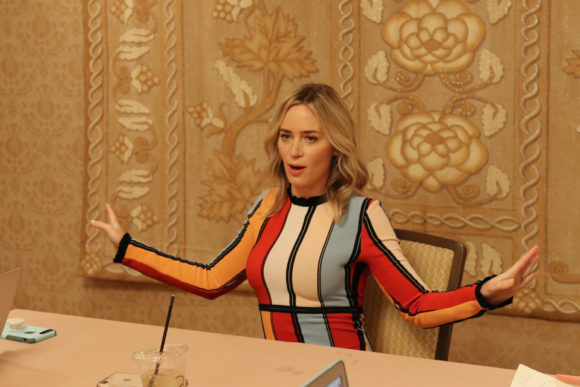 Emily Blunt describes some of the movements she was able to make in her favorite costume. Photo Credit Jana Seitzer

From dance numbers to magical scenes it is so hard for me to pick a favorite scene from Mary Poppins Returns. We imagined it might be for Emily Blunt as well. As it turns out one of my favorite moments is also one of Emily’s.

God there were so many that I loved.  I mean, I love the poignancy of the ballad that I sing to the kids cause it’s sort of her revealing her most tender side. She’s such a weird eccentric lady and she’s stern. She shows great humanity and great depth because she comes into their lives to heal and to bring order to chaos and reintroduce the idea of magic. She doesn’t let you know that so it’s sort of exciting to play someone who’s in command of the environment and yet pretends kind of not to be.

Emily Blunt is Mary Poppins and Lin-Manuel Miranda is Jack in Disneyâ€™s MARY POPPINS RETURNS, a sequel to the 1964 MARY POPPINS, which takes audiences on an entirely new adventure with the practically perfect nanny and the Banks family.

And Mary Poppins expects nothing in return. I would say that scene with the kids was really moving and then I loved that big, the cover is not the book number, with Lin, it was like wild, you know.  That was really fun.

We were all overjoyed to see Dick Van Dyke return to Mary Poppins Returns. It was one of Emily Blunt’s favorite moments as well. Here’s what she shared about working with Dick Van Dyke.

Oh My God. It was so overwhelming I have to say because he’s so sprightly and cool, just what a gorgeous human and he walked on set and he just said I feel the same spirit here that was there on the first movie, and of course, we all wanted to cry.  We’d sit around him and just want him to tell us stories about the original and he sang “Jolly Holiday” to me.  I was just like that’s it, I could die now, that’s it. I could die and be happy.  It’s just lights out, awesome moment. 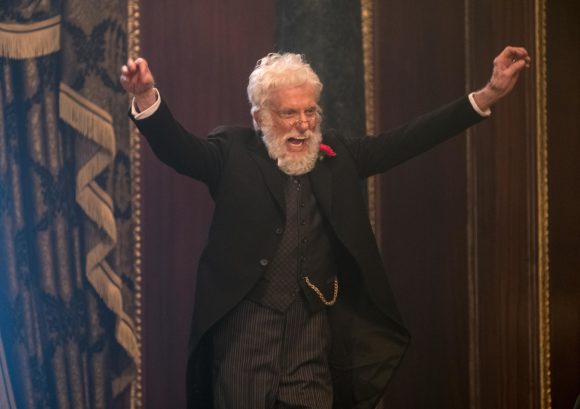 Dick Van Dyke plays Mr. Dawes Jr., the retired chairman of the bank where the Banks family has worked.

My other moment of Oh My God, I’m playing Mary Poppins was in the scene with him where he has that beautiful monologue that was so gorgeous to Michael Banks and we’re all crowded around him and the music starts. He finishes the monologue and in the scene. He crosses his arms and he looks up at me like that. I just remember looking at those iconic blue eyes and I was like Wow! That was so wild. 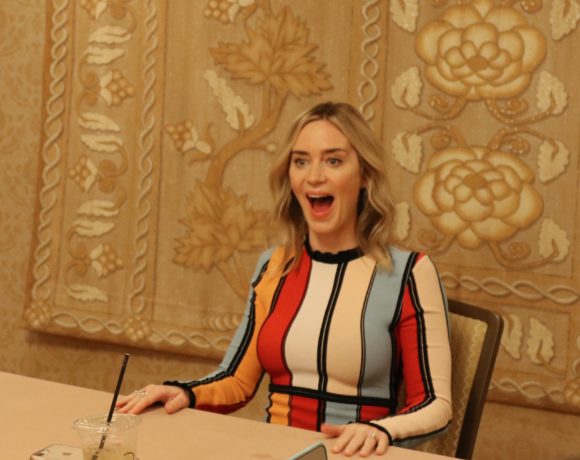 Emily Blunts excitement to work with Dick Van Dyke showed through her words and her reactions. Photo Credit Jana Seitzer

Considering Emily Blunt plays a motherly role of Mary Poppins, I had to ask how playing Mary Poppins affected her own mothering of her two children.

I feel my whole household is full of imagination and childlike wonder cause my kids are so young. I do feel like I’ve sort of rediscovered life through their eyes really. I mean Hazel is a bit disappointed that there aren’t dolphins in her bathtub. I feel like actually in a way, Mary Poppins has kind of shot me in the foot, like I know I’m only going to be less than.  I think for everyone else like all of their friends are gonna be like your Mum’s Mary Poppins, that’s so cool, and my own kids would be like, you should see it, it’s not like that. They are gonna be like she is so not Mary Poppins.

Emily Blunt is Mary Poppins, Lin-Manuel Miranda is Jack, Pixie Davies is Annabel, Nathanael Saleh is John and Joel Dawson is Georgie in Disney’s MARY POPPINS RETURNS, a sequel to the 1964 MARY POPPINS, which takes audiences on an entirely new adventure with the practically perfect nanny and the Banks family. 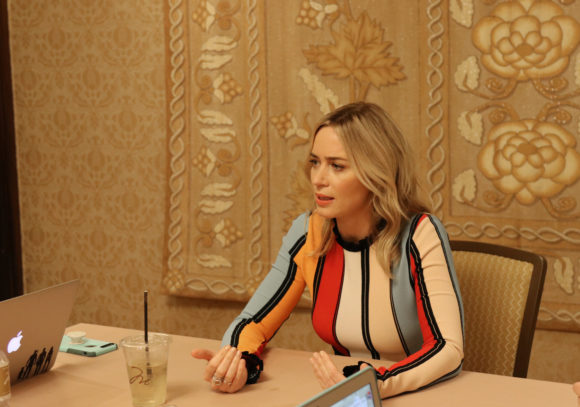 Emily Blunt reflects on how being Mary Poppins has become interwined with being a mother to her children. Photo Credit Jana Seitzer

I said to Rob Marshall, I said the sternness, I really want all the sternness and this sort of imperious quality to her, like to drop when she goes into these Fantasias.  Mary Poppins should be like an adrenaline junkie and that sort of duality of the character.

You know, that when she goes into these adventures, you’ve got to see her childlike wonder and her thrill and enjoyment of it.  And then when it’s over, she pretends none of it happened and she had nothing to do with it.  It’s cool playing someone with that duality to them. 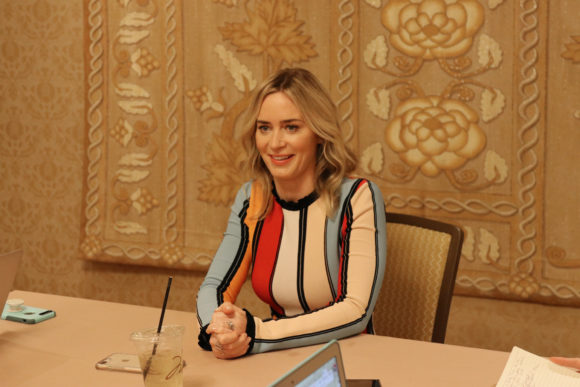 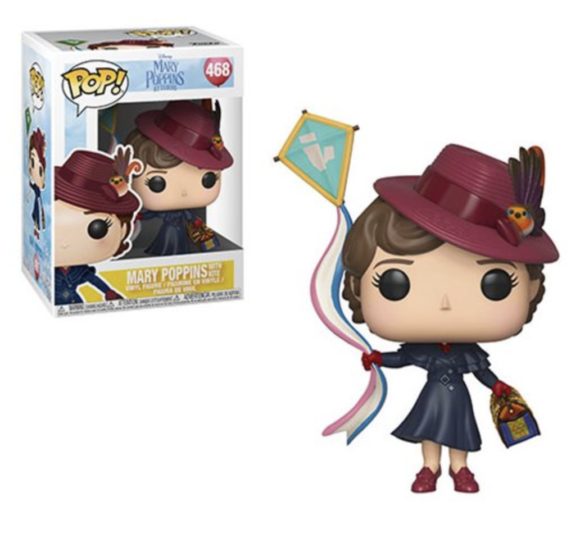 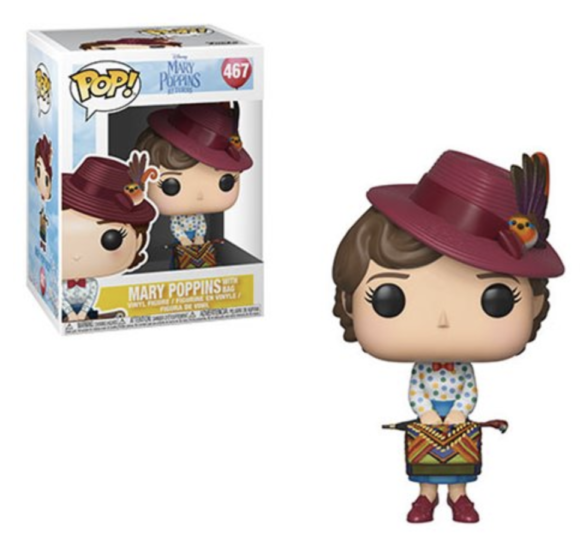 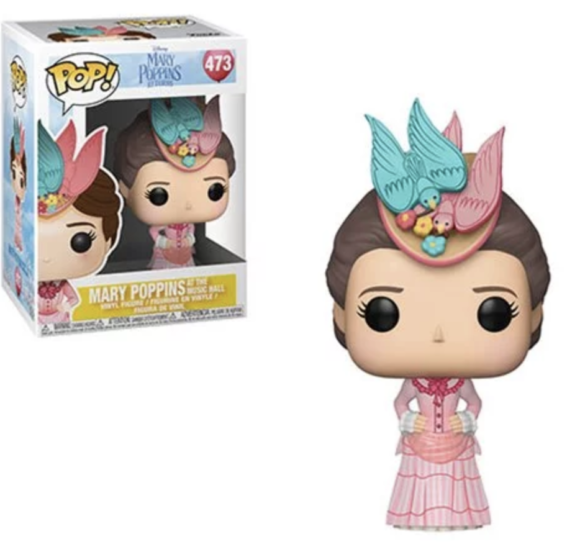 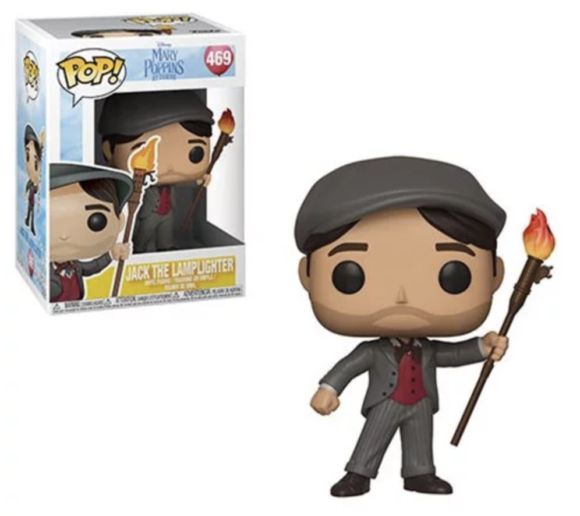