It all started with a comic book!

Marvel is celebrating 80 years of comics! Wow! Look how far they’ve come in that 80 years. Now Marvel has not just comic books, but MOVIES, games, and more. 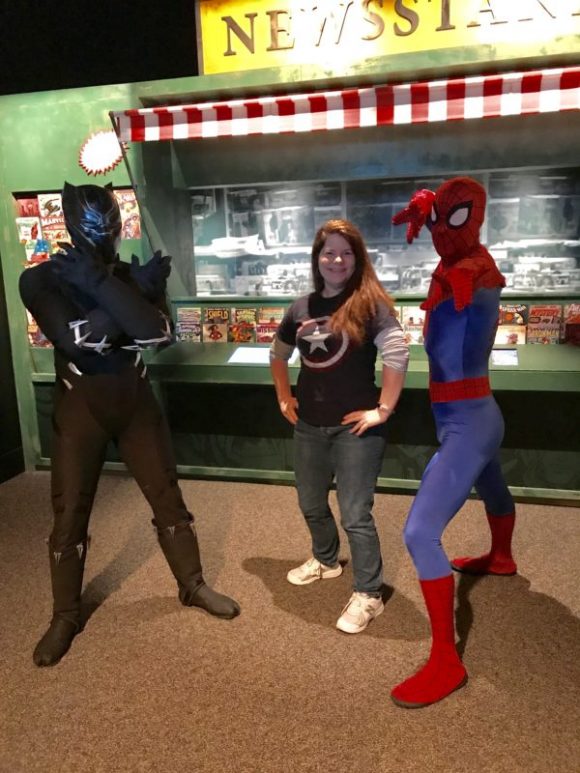 Allow me to first give you a glimpse of what I experienced during the press conference. I’ve merged in audio and commentary from Franklin Institute President & CEO Larry Dubinski, Marvel Editor in Chief C. B. Cebulski, and Chief Curator Ben Saunders along with some of my favorite pictures from the exhibit.

Don’t wait! Get out those calendars and start planning your visit. Review our list below and then get that date on your calendar. 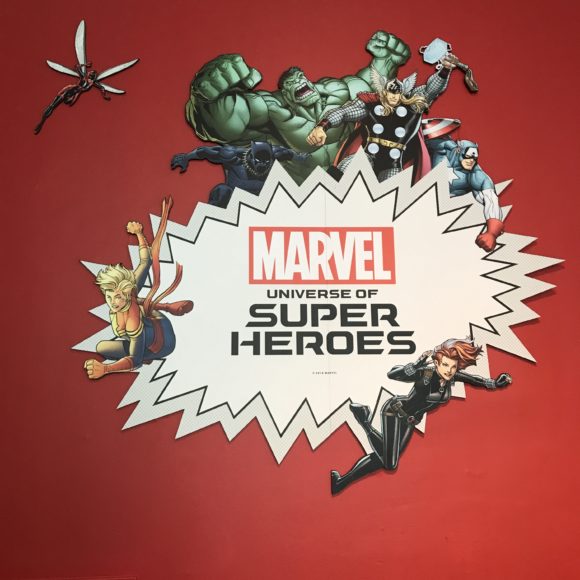 See a movie about Marvel

As you enter the Marvel Universe of Super Heroes at The Franklin Institute you’ll pass old black and white photos of kids reading comics and enter a large room. On a large screen you’ll have the chance to watch a video that details the history of Marvel. From its origin in comics to today’s movies and more, the films covers as much as it can in just a few minutes. 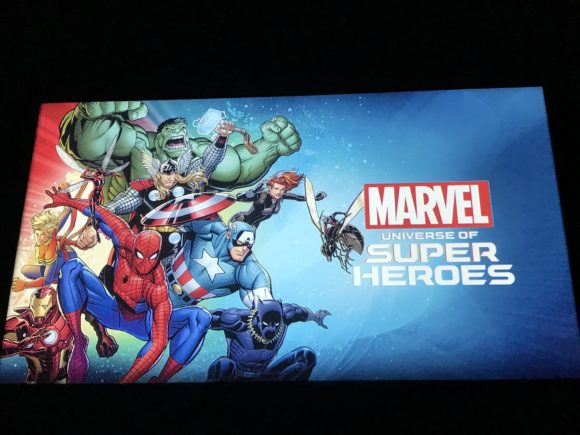 Read classic comics from the past and modern times.

What would the Marvel Universe of Super Heroes exhibit be without comic books to read? The Marvel exhibit features artwork that displays older comics in glass cases. Framed artwork and wall murals show comic scenes from earlier years up until today. In fact, one of the most valuable comics on display is the first comic book Marvel ever published, title Marvel Comics #1. It was published in 1939.

“I need to learn to read, so that I can read this.” – Marvel Universe of Super Heroes exhibit Chief Curator Ben Saunders” 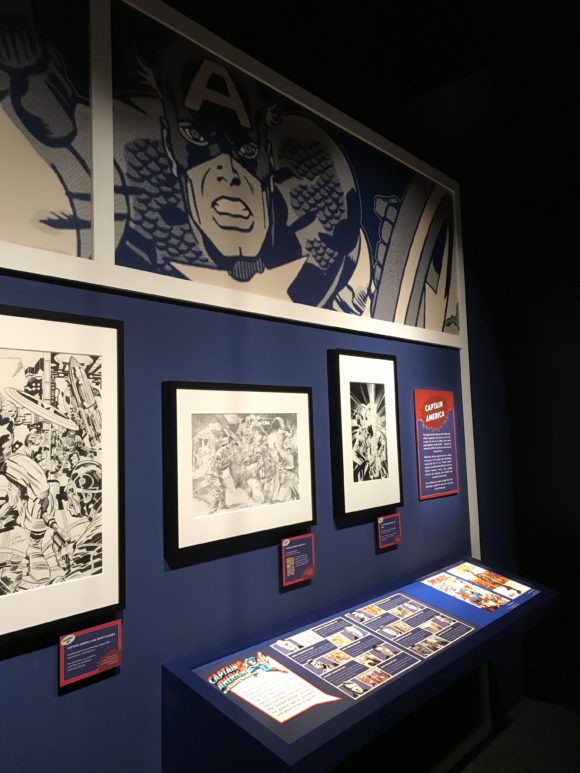 Throughout the multi-level Marvel Universe of Super Heroes exhibit there are areas where visitors can watch TV shows from the past. Step up to the screen. Hold the special earpiece to your ear and press play. I found at least 4 sets of screens with superhero TV episodes. 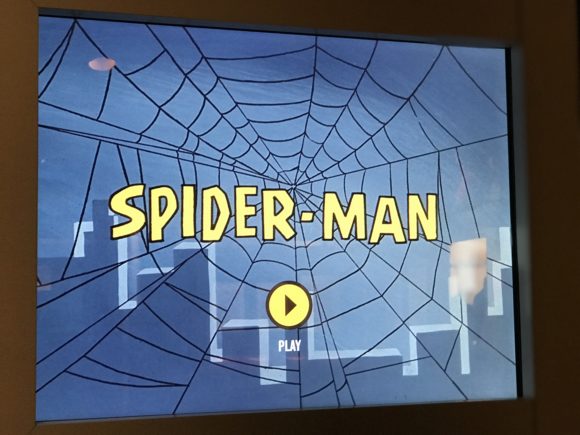 Pose for a picture with a super hero

The Marvel Universe of Super Heroes exhibit decor at The Franklin Institute is colorful, vibrant, and vivid. You’ll find yourself stopping the kids every few steps to take another picture of them up against something. But what stood out more than anything else were the larger-than-life statues of Marvel super heroes. They make for the best photo opps in the Marvel Universe of Super Heroes. 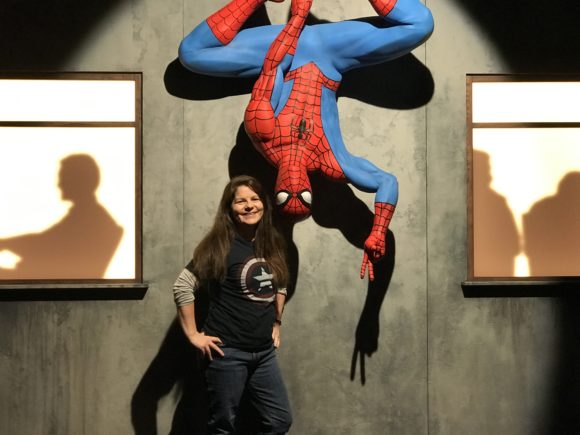 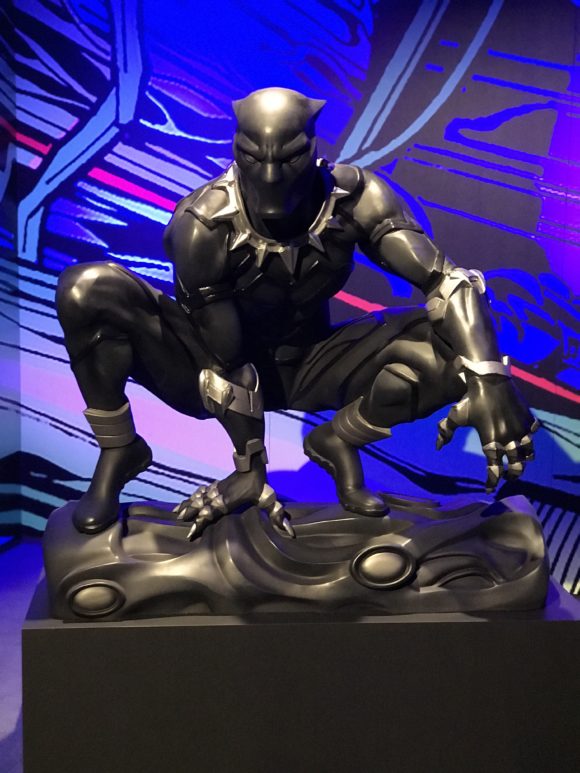 Pay your respects at the tribute to Stan Lee

What can you say about Stan Lee? Comic book writer, editor, publisher, producer, iconic figure with a legacy none of us will soon forget. His impact has extended to everything that carries the Marvel name. As part of the Marvel Universe of Super Heroes exhibit, there is a wall designed in tribute to Stan Lee. 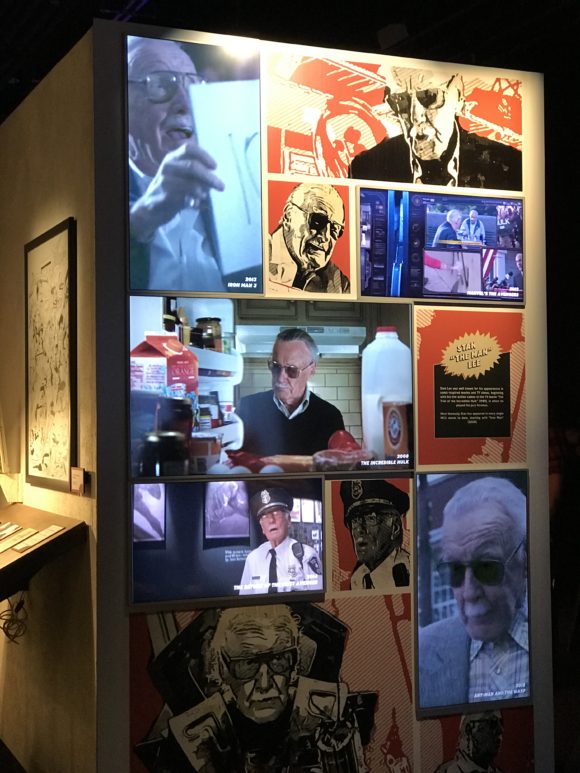 Vote for your favorite super hero

Step up to the booth and vote for your favorite super hero. There are 20 to choose from. Once you press the button to vote, you’ll see a special message from that super hero on a television in the nearby display case. 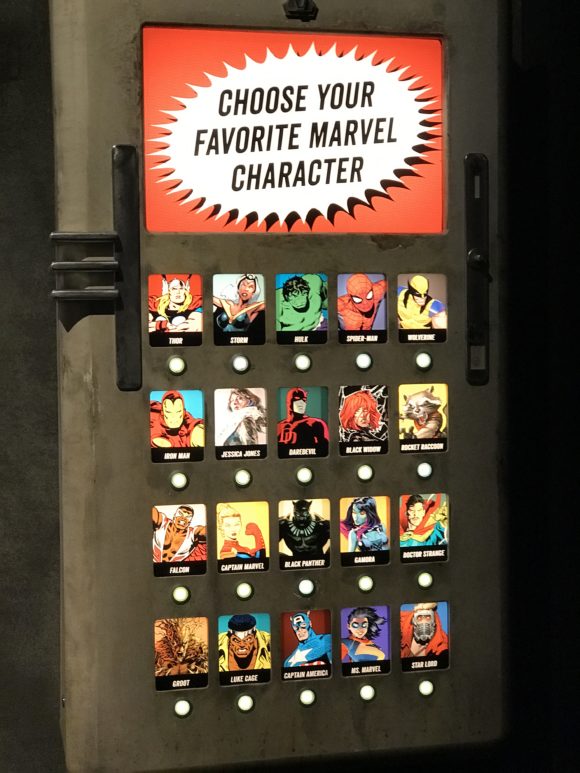 This Marvel Super Heroes exhibit features more than 300 artifacts, including some of Marvel’s most iconic artwork and comic pages, costumes, and props. If you’re a comic book collector, new or old, you’ll be thrilled with the variety of the exhibit: set pieces, soundscapes, and interactive elements. 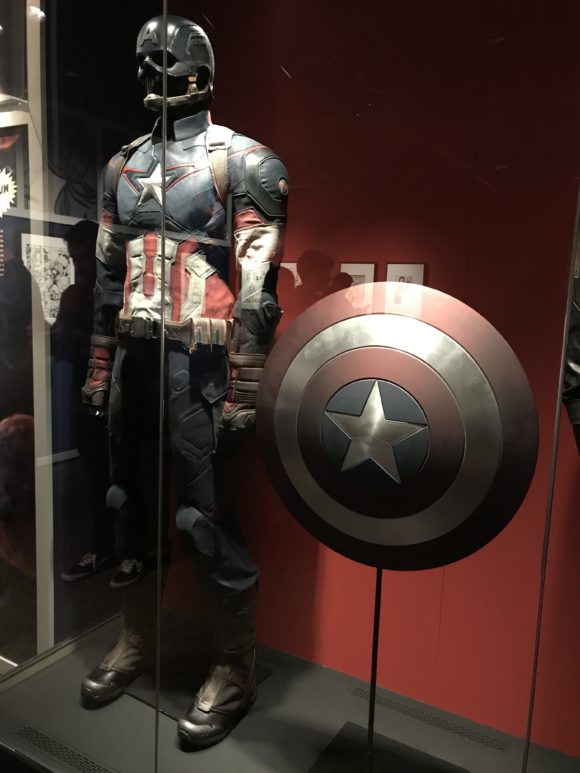 Learn what goes into creating a Marvel superhero comic book

When I first started dating my husband he was a big comic book collector. He still is. He would tell me about Jim Lee, Stan Lee, Marc Silvestri, and other comic book artists. One person draws the art. Another person inks in the design. Another … I learned early on that several people work together to create comic books. The Marvel exhibit at the Franklin Institute helps fans and guests explore the making of a comic book. 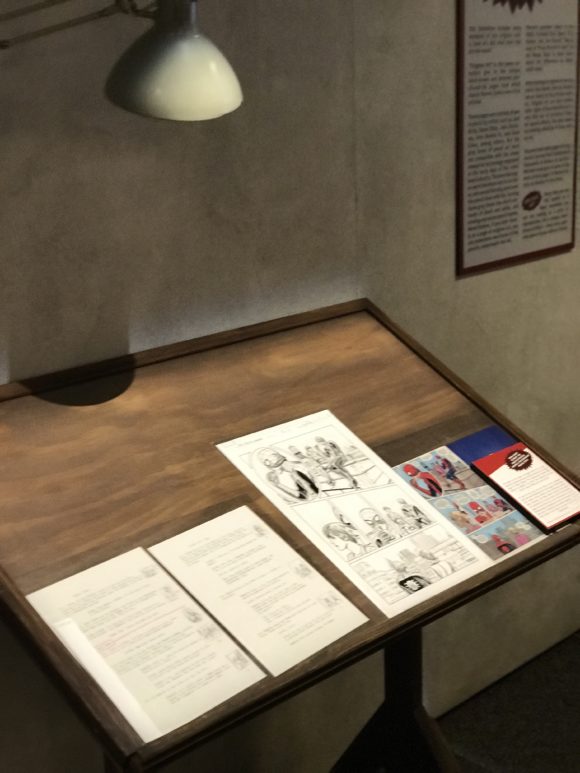 Almost like a scene from a Marvel movie, you can walk through Dr. Strange’s room of mirrors and illusions. 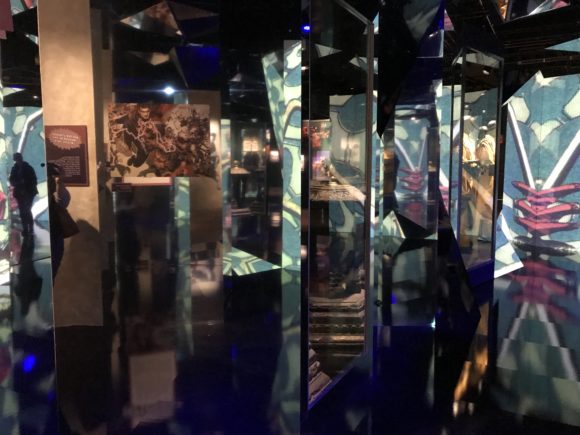 Add to your collection of Marvel memorabilia

As you finish walking through Marvel Universe of Super Heroes, the exhibit exits to a gift shop. Find plush characters, super hero t-shirts, Marvel LEGO sets, and more. My favorite is this encyclopodia for the Marvel Universe exhibit. As journalists we were each given a copy. I could barely get the plastic off before one of my teenagers tried to claim it as his own. The book goes into detail about the history of Marvel and the creation of this exhibit. 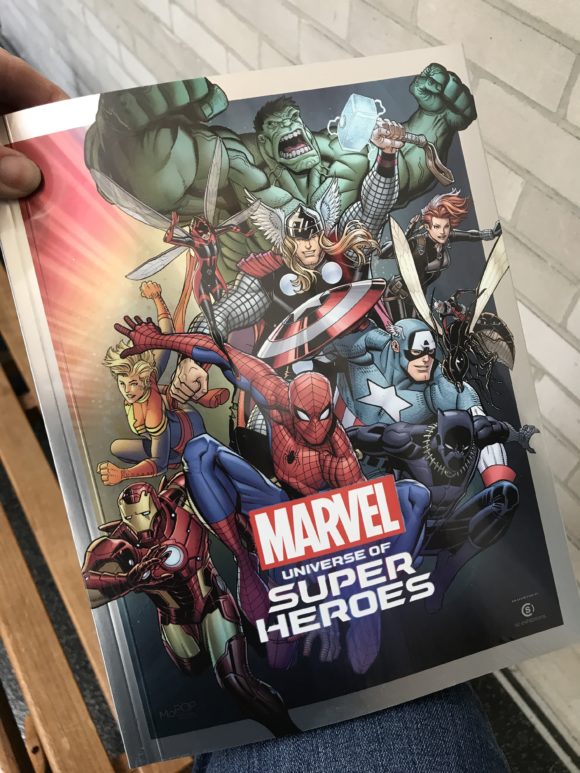 Pick up this encyclopedia of the Marvel Universe of Super Heroes at the Franklin Institute.

I enjoyed the Marvel Universe exhibit. I found the wall art to be colorful and engaging. The television screens and voting booths added an interactive element that younger children will appreciate. The larger-than-life statues will make it easy for parents to convince their kids to take selfies with them. The exhibit is defintely geared heavily to the comic book fans. Most of the wall art is dedicated to comic books and comic book art.

I was disappointed not to find as many interactive elements as previous Franklin Institute exhibits. There are no costumes to try on, games to play, or weapons to hold and touch. There are no virtual reality activities. While there are the large statues (Incredible Hulk, Black Panther, and Spiderman) to take pictures with I’m concerned there may not be enough to keep the attention of younger children or one who isn’t a big comic  book or super hero fan.

Marvel Universe of Super Heroes is best geared to those looking for a museum-like experience to learn more about their favorite comic books and super heroes. It’s certainly more exciting than most museum exhibits with it’s attractive, eye catching murals and displays. But with nearly everything in display cases it very much has that museum feel to it.

Tips for the Marvel Universe of Super Heroes 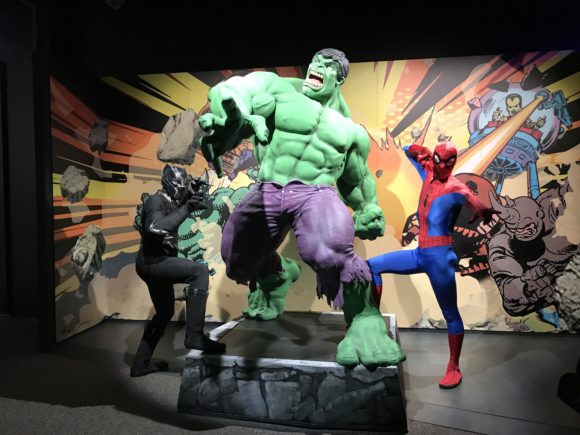 Want to read more about visiting the Franklin Institute?

What will be one of your favorite things to do at Marvel Universe of Super Heroes at The Franklin Institute?

Want to keep the superhero fun going with your kids even after you’ve visited the Franklin Institute? Check out these 20 Superhero Activities for Kids to Make and Do from Darcy and Brian.