The following is a Jersey Family Fun exclusive interview with Common on Smallfoot, believing in yourself, life lessons and more.

In Smallfoot, Common’s character of the Stonekeeper is not a villain in the usual sense, though he does some villainous things like supporting lies and kicking Migo, the movie’s hero, out of the community. Perhaps, he is doing the wrong things for the right reasons. Kirkpatrick, the co-screenwriter/director, credits Common with bringing a level of complexity to his character. “Common’s performance brings different dimensions to the role, not only a soulfulness, but a sort of smooth, unflappable quality that keeps us from going down that role of the mustache-twirling villain.”

Recently, I had the chance to interview Common and came to find out just what makes him a special kind of actor.

Born Lonnie Corant Jaman Shuka Rasid Lynn, but better known by his stage name of Common (formerly Common Sense). Common is a rapper, performer, actor, poet, film producer. Common debuted in 1992 with his album Can I Borrow a Dollar? And maintained a significant underground following in the late 1990s, which led to mainstream success. 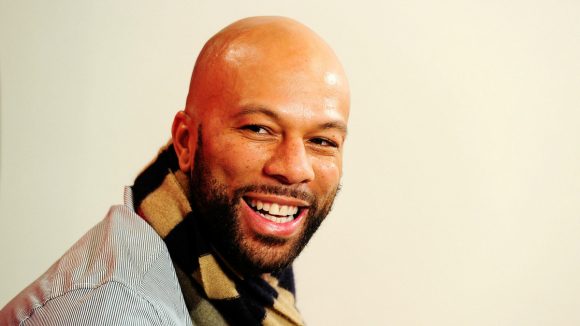 Common, the Stonekeeper from the Smallfoot Movie

There Is Nothing Common About Common

I thought the movie Smallfoot was extremely charming. So, I started by asking Common why he picked this movie?

Common:  Thank you for that, those words.  I picked it because I always wanted to be a part of things that kids can appreciate, that touches kids.  There’s something about when kids resonate with the art that I’m a part of that makes me feel really good, especially when I think it has some type of value and softness to it; but, it’s not preachy.

What was your reaction to the script?

Common: When I went to the presentation and first got the story of what Smallfoot was going to be about, I was excited about the potential of it.  Then the cast made me be like, ‘I want to be in this.’  Channing Tatum, James Corden, LeBron James, Danny DeVito and Zendaya. My daughter loves Zendaya, so she was quickly on board.  It was incredible to be a part of that cast.

How did you approach your character?

Common: We wanted the Stonekeeper to have dynamics, so that audiences wouldn’t just dismiss him or say, ‘This guy is evil.’ Because people are dynamic, they can be doing bad things, but still be a good person. [Director] Karey Kirkpatrick and I worked on the Stonekeepers voice to get the right balance of darkness and warmth.

How do you deal with him being so wrong about acknowledging the existence of a Smallfoot, especially when there was one standing him right in the face?

Common: The Stonekeeper is not only the father to Meechee, but to the whole village. He’s a leader, and being a leader is a tough position to be in. The job of Stonekeeper carries a lot of wisdom and authority. He’s determined to prove the Smallfoot doesn’t exist because the Yetis live in a small world and that’s okay for them. It’s good. Things are perfect, the way he sees it, and he wants to keep it that way.

The movie definitely isn’t too preachy, but I do see some messages there, including important life lessons about not judging people even if they are different from you.  What are the messages that you might see?

Common:  I definitely see a message here.  One of the first things I see is that a lot of things that we’re told from tradition and the powers-that-be, we don’t have to always need to take as written law.  So, to know that they’re not always things that we have to adhere to.  We can question those things and figure out what we really think about life. What else comes to mind?

Common: In the same correlation to the laws the Stonekeeper was saying, ‘this is what the stones say and this is what we need to abide by.’  But that was not all true.  We deal with that a lot in our society when it comes to politics and a lot of things to deal with the government.  Some of them are not just true. and we don’t have to accept it.

What do we need to do?

Common: We should be able to question it.  I think it’s the job of the people, the media and even people who are involved in politics to question things and be on the right side of things.  I think that scene where Migo chooses to be on the right side of things and he knew a whole village would be against them and his father would be disappointed. He knew that the leader of the village, the Stonekeeper, would also be disappointed; yet he still chose to speak his truth.

So, what is the main message?

Common: What is a really a strong message is not being afraid of what’s different than you.  The Yetis were afraid of the Smallfoot.  Somebody had a bad experience, so they stereotyped all of them, and that’s what kept them divided for so long.

Have you ever, in your career, felt like you faced insurmountable odds and how did you handle it?

Common:  Yes.  I have been, in my experience, faced insurmountable odds.  First, I was stressed out and then I said, ‘I’m built for this.’  I kept reminding myself of my purpose.  I put my spirituality first and kept working at my craft and making sure that the things I was doing was going to be towards the goal and not towards the opposite of the goal. I would say that is a great attitude for all of us.

Common: Thank you. I continue to focus on those things and then eventually, surround myself with energy and people who supported that goal and vision. I always kept working towards it and believing in it, even if there always wasn’t a victory. Regardless, it doesn’t mean that goal wasn’t there for you.  So, I kept that in mind.  Always believe in yourself, your goals and give them everything you’ve got!

And with that my interview with Common was over and I wished him good luck with all of his projects.

Get to know more about the Smallfoot movie in our review. Click over to The Animated Movie Smallfoot is Charming Families.