Please enjoy this feature about the Indian Echo Caverns from guest blogger, Alix Hayes. Alix Hayes has lived in Monmouth County for the past decade, and has an almost 5-year old girl and a 6-year old boy. As a former broadcast journalist, this forty-ish mama is always on the hunt for fun and different adventures, so she is constantly taking her hubby and kids on weekend activities. So far, they rarely complain! 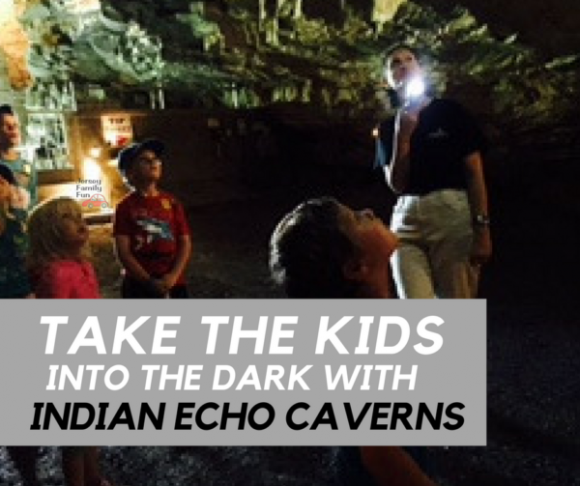 For the past four years, we have vacationed in the Lancaster area during the summer. This year, I wanted to make our 3-day trip a bit different, and to try someplace new. Besides a stop at the local Waffle House — which, indeed, was amazingly yummy and a first for my kids and my husband — I chose to make a family pit stop at one of Pennsylvania’s many storied caverns, Indian Echo Caverns …and the vast, dark, cool underground was truly educational and mesmerizing! 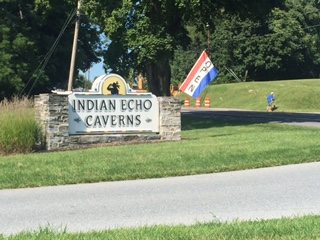 From a quick Google search, I decided on Indian Echo Caverns, in Hummelstown, PA, because it is the closest caverns to tour near Lancaster, a 35-minute ride away (frankly, they’re super-close to Hershey, as well).The Indian Echo Caverns are only minutes off the PA Turnpike, which was a bonus. It looks like you’re entering some family estate as you drive past the Indian Echo sign right off Middletown Road. 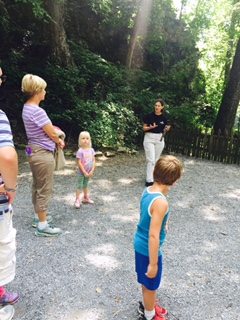 There is ample parking, and since the caverns website was ‘under construction’ I was immediately surprised to see a life-size teepee, a large playground area with several jungle-gyms and slides, and even a petting zoo! (I call that a Mommy Bonus! My six year old son and four-and-a-half year old daughter were doubly excited!) 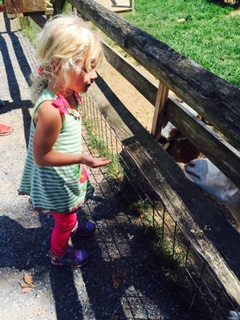 I made a quick beeline for the main building while the hubby watched the kids pet the goats, and found out that Indian Echo Caverns tours leave every 15 minutes or so. It literally took three minutes from parking to joining our tour guide at the starting area just outside the gift shop, and the awesome-Adrienne took us on a one-hour tour of the most incredible visual experience my kids have probably ever been to! 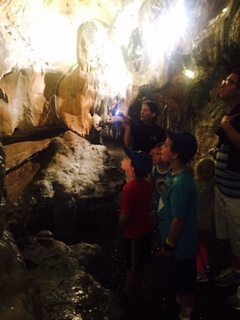 The Indian Echo Caverns tour starts by going down about 80 steep steps to the base of where the cave starts. The entrance looks like an old-school mining shaft entry. Once inside, you could immediately tell how much colder caverns are — a chilly 54-degrees, which was very appreciated on a hot Summer day. (Indian Echo runs tours year-round, which would be so fun to go on a tour in the freezing Winter. Adrienne says steam comes out of the cavern then!) I had read about the temperature drop online , so I asked the kids if they wanted their sweatshirts that I had brought along, and both declined, save for the last five minutes of the tour when my youngest said she was getting cold. 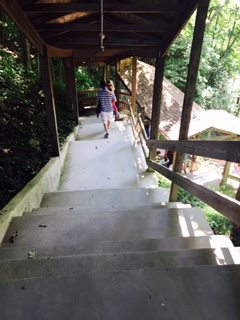 Our guide was so knowledgeable about the Indian Echo Caverns’ history, from how Native Americans used it almost like an icebox to keep provisions cold, to explorers who ventured all over the cave, to describing the difference between stalactites (a rock formation that comes down or hangs from a cave’s ceiling), and stalagmites (rises from the floor). We found it all so fascinating! 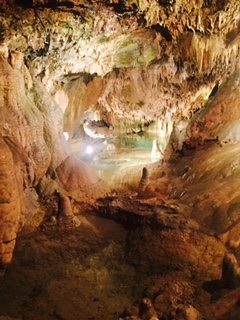 Incidentally, I wasn’t sure my kids were paying attention to anything other than the ‘neat things’ we were walking by, until my daughter said, “Mommy watch your head! That’s Headache Rock!” I guess they listened when Adrienne told us about one particularly low-hanging entryway that was notorious for “bonked heads,” as my son would say.
At Indian Echo Caverns, you will also walk into an area called the Wedding Chapel (yes, they have held actual weddings there!), see the Bridal Veil rock and other non-descript formations that kind-of-look-like the New York City skyline or an animal’s head. And, you’ll see underwater ponds, and learn how on earth (or, literally, in the earth!) one man, many decades ago, actually lived as a hermit in the cave for years. 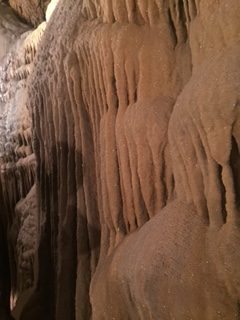 The entire tour is pretty dark, mind you, though there are over 1,000 lights throughout, but my kids, husband and I had no problems ducking when we needed to and following our guide through narrow passageways. There was even a mom with a toddler in a carrier on her back for the tour! Just a warning: you may get your shoes/feet wet, as the gravel and dirt pathways are constantly wet from the water all over the rock formations. (And don’t forget: you’re not supposed to touch any of the cavern walls or rocks! 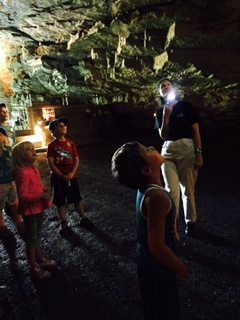 The gift shop has plenty of rocks to look at and purchase, as well. There are also plenty of places to picnic, and there’s even a mining sluice that adults and kids can use: buy a bag of rocks in the gift shop, then ‘pan for treasure’ !)

Overall, we had such a blast going to Indian Echo Caverns. My children thought it was ‘super cool,’ my husband had never been in a cave or cavern tour so it was a Bucket List moment, and I would most-certainly bring the kids back when they’re older, too. It may have even inspired us to visit other regional caverns in the future! 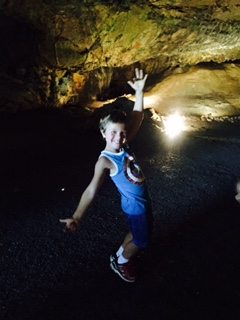