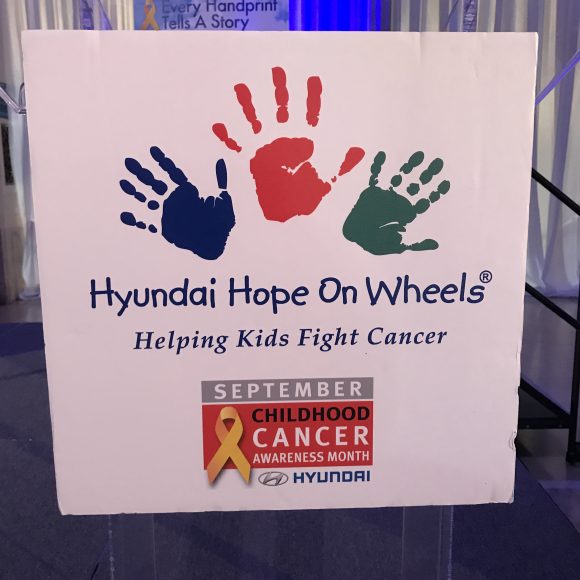 Last week I had the honor of being invited to the Hyundai Hope on Wheels Celebration of Life dinner at the Franklin Institute. When the invitation first came, I admit I was not familiar with the Hope on Wheels program, but I was curious. I read further and learned the dinner was to honor local children battling cancer and to recognize the doctors and researchers of The Children’s Hospital of Philadelphia who are helping children in that battle.

How could we not support something to support ending childhood cancer?

Just this past month, we supported Izzy’s Infantry as our Charitable Partner in Caring. This local New Jersey charity started recently to help children in their fight against cancer. You can learn more here. Attending the Hope on Wheels dinner would be a win-win all around. I was able to learn about another organization helping families in our area so that I can share that story with you. And with their payment to us for covering the event, we will be donating a portion back to Izzy’s Infantry.

Both Hyundai Hope on Wheels and Izzy’s Infantry held events in September in honor of National Childhood Cancer Awareness Month.  In September alone, Hope On Wheels awarded 40 research grants totaling $8.5 million to institutions nationwide, $400,000 was awarded to a CHOP to help families across Philadelphia, South Jersey, and the region. To date, Hope on Wheels has donated a total to $130 million to fight against pediatric cancer in 1998.

How Hyundai Hope on Wheels got started

In 1998, Hyundai and a group of New England-area Hyundai dealers joined the fight against pediatric cancer by supporting a local initiative to support the Jimmy Fund at the Dana-Farber Cancer Institute. This activity quickly grew nationwide and soon became Hyundai Hope On Wheels, a nonprofit organization that is committed to helping kids fight cancer.

Why pediatric cancer matters to Hyundai

Hyundai and its dealers want a better society for all of our children. They believe “kids are the future and they deserve every opportunity to grow, play and learn in a world free of pediatric cancer.”

One in five children is not acceptable to Hyundai. They want to do more to end childhood cancer.

Less than 4% of federal research funding for cancer is designated for pediatric cancer.

In donating nearly $130 million through Hyundai Hope on Wheels grants, the organization is a leader in funding pediatric cancer research in the U.S. There are over 280 research projects currently underway. WOW! This year an additional 68 pediatric cancer research grants were awarded. Research proposals are submitted once a year. Each of them is peer-reviewed with grants being awarded to the proposals deemed to have the greatest impact on improving cures.

There are 5 Hyundai Hope on Wheels grant categories:

In Philadelphia, the Hyundai Hope on Wheels program has announced funding $400,000 in research grants to The Children’s Hospital of Philadelphia.

The Children’s Hospital of Philadelphia received two grants to fight one of the rarer forms of Pediatric Cancer and develop therapies for that type of cancer. Kristopher Bosse, MD, an attending physician in the Division of Oncology, received The Young Investigator Grant for $150,000. Kathrin M. Bernt, MD, a Pediatric Oncologist in the Cancer Center’s Leukemia and Lymphoma Program, received The Hyundai Scholar Hope Grant for $250,000.

Every two years, the Hyundai Hope on Wheels program chooses two National Youth Ambassadors, children who have survived pediatric cancer. These ambassadors travel the country sharing their cancer success stories to encourage others battling the disease.

During the Hyundai Hope on Wheels dinner, youth ambassador Ryan Darby spoke to us about his cancer battle. Ryan, a 14-year-old from Bethesda, MD, was diagnosed with leukemia at the age of 6. After countless nights in the hospital and multiple surgeries, Ryan is cancer free. We learned about his love of sports and his journey with pediatric cancer.

You can learn more about Ryan in the video below. I recorded this as he spoke during the dinner.

As we ate dinner with the Children’s Hospital of Philadelphia doctors and the Hyundai dealerships we were treated to a live performance from Luke Wade from The Voice. He shared the stories behind his songs and even lead us in a sing along with classic songs like Stand by Me. You can watch a part of Luke Wade’s performance below.

From hearing Ryan’s story to listening about new developments in the fight against pediatric cancer, it was an awe-inspiring night. The Hyundai Hope on Wheels program will continue to travel the country to raise cancer awareness and funds for research. Join me in following where the handprinted Hope on Wheels van will stop next and in learning how we can all help to end pediatric cancers.

Would you like to help Hyundai Hope on Wheels end pediatric cancer?

Beyond purchasing a new Hyundai (where a portion of every sale is donated to the Hyundai Hope on Wheels program) you can learn more at HyundaiHopeOnWheels.org or at any of their social media channels.