I was honored to be invited to the #PixarCocoEvent, a Disney press junket for Disney Pixar COCO, Big Hero 6 Baymak Returns, Kevin (Probably) Saves the World, Designated Survivor, and Olaf’s Frozen Adventure. As a guest, my expenses were covered in return for a series of articles about my experiences and reviews of the programming. Today, I’m sharing how to draw Olaf and new news about Olaf’s Frozen Adventure. 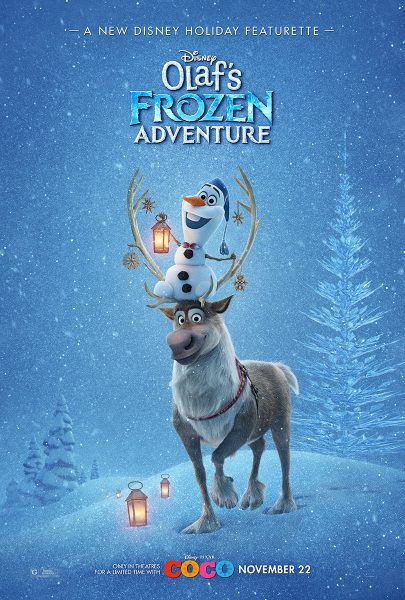 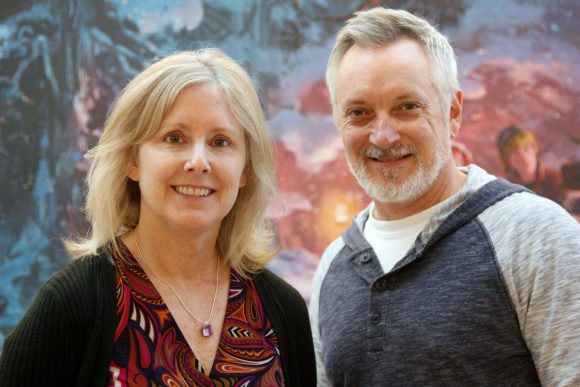 Olaf (voice of Josh Gad) teams up with Sven on a merry mission in Walt Disney Animation Studios’ 21-minute featurette “Olaf’s Frozen Adventure.” It’s the first holiday season since the gates reopened and Anna (voice of Kristen Bell) and Elsa (voice of Idina Menzel) host a celebration for all of Arendelle. When the townspeople unexpectedly leave early to enjoy their individual holiday customs, the sisters realize they have no family traditions of their own. So, Olaf sets out to comb the kingdom to bring home the best traditions and save this first Christmas for his friends. Directed by Emmy®-winning filmmakers Kevin Deters and Stevie Wermers-Skelton (“Prep & Landing”), produced by Oscar® winner Roy Conli (“Big Hero 6”), and featuring a screenplay by Jac Schaeffer and four original songs by Elyssa Samsel and Kate Anderson. 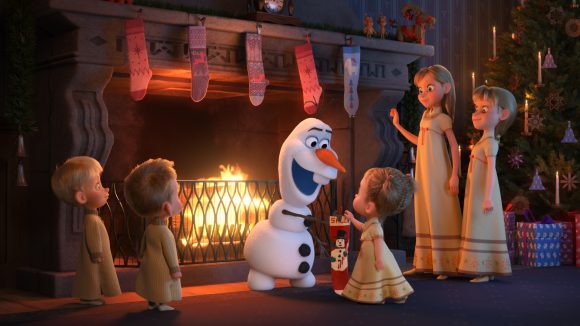 SO THIS IS WHAT HEAT FEELS LIKE — In Walt Disney Animation Studios’ 21-minute featurette “Olaf’s Frozen Adventure,” Olaf’s merry mission to find the best holiday traditions is told in part through the original song “That Time of Year.” Featuring four new original songs written by Elyssa Samsel and Kate Anderson, “Olaf’s Frozen Adventure” opens in front of Disney•Pixar’s original feature “Coco” in U.S. theaters on Nov. 22, 2017. ©2017 Disney. All Rights Reserved.

You may remember that I recently shared the moments that melted my heart from Olaf’s Frozen Adventure and what I learned from our interview with Directors Stevie Wermers-Skelton and Kevin Deters, Producer Roy Conli and Songwriters Elyssa Samsel and Kate Anderson in this post, 8 Ways Olaf’s Frozen Adventure will Melt Your Heart & Make You Smile. After our interview with this team, we got to sit down with Animator Michael Franceschi and Animation Supervisor Chad Sellers, where they taught us how to draw Olaf. Today, I’m reflecting back on that great experience by sharing their drawing lesson with you. 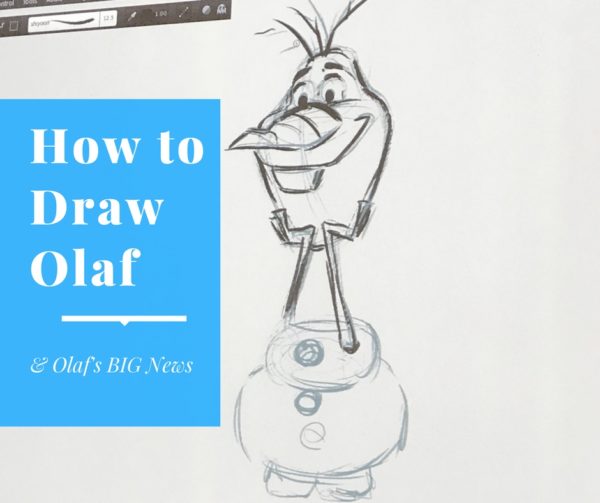 How to Draw Olaf from Frozen and Olaf’s Frozen Adventure

Put on the holiday music, perhaps the Olaf’s Frozen Adventure soundtrack (available here on Amazon) and stir up a cup of hot chocolate to set the mood for learning how to draw Olaf. Grab some paper and your favorite coloring pencils. 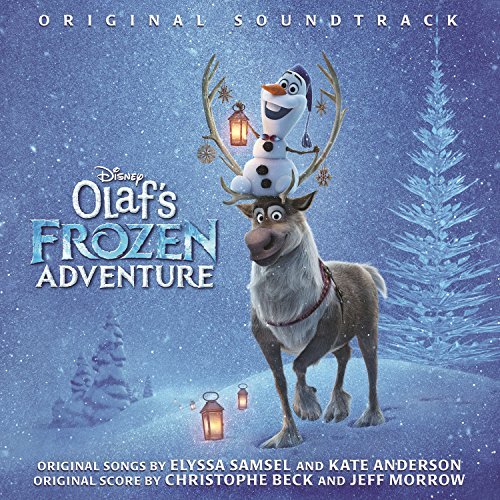 We started learning how to draw Olaf by drawing his head. Michael Franceschi instructed us to begin by creating a football shape. You’ll notice how Olaf’s head is slightly oval and slightly rectangular. Sketch out a semiwide football, giving it a somewhat straight bottom and a dip that comes in more like you can see in our images. You can also think of it as two pots or bowls together, with an upside down bowl as the top of Olaf’s head and the right side up one the bottom of his head. 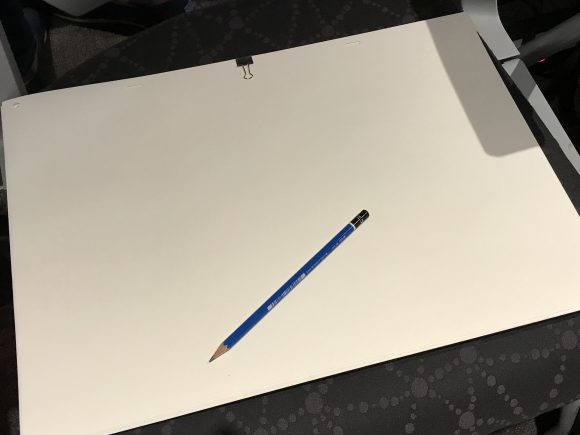 With an outline to Olaf’s head, we had to learn how to draw Olaf’s facial features like his mouth, nose, eyes, and hair. 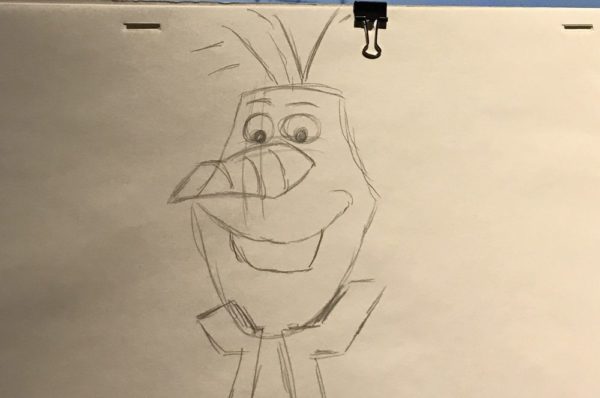 Drawing arms on Olaf wasn’t too difficult. What you will need to do is keep in mind the height of the paper as you draw Olaf’s arms and the rest of his body. Give yourself enough room for both. At the base of Olaf’s head, sketch out 4 straight lines that angle outward from the top to the bottom. The inner lines should touch the base of Olaf’s head while the outer two, will be about an inch shorter. Design Olaf’s hands with straight lines, like above, that appear to cup his face.

To draw the bottom of Olaf’s arms, connect the bottom of the lines with a slightly curved line. You can later erase the portion that is ‘hidden’ by Olaf’s body. 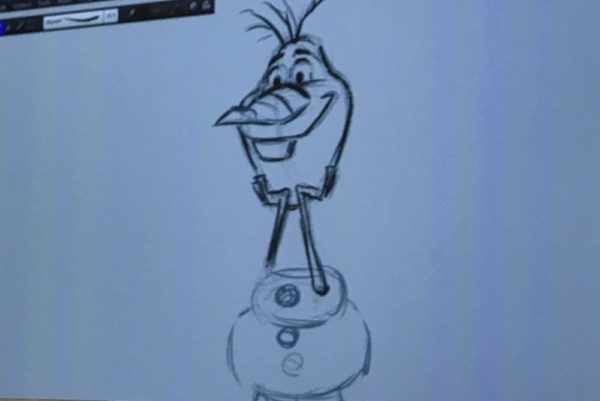 We’re almost done learning how to draw Olaf. It’s time to add the body. Olaf isn’t like most snowmen. His body is not made from perfectly-shaped circle. Rather we can draw Olaf’s body by imagining marshmallows and how they look when you start to pinch them. Start with the top/middle part of his body. Create a small rectange but with the left and right sides curved outward and the top and bottom curved downward. For the top of that body part, sketch out an elongated oval to help shape the curve. 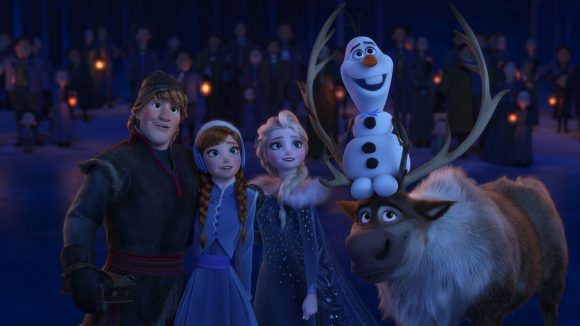 WHEN WE’RE TOGETHER –Walt Disney Animation Studios’ “Olaf’s Frozen Adventure” features four all-new original songs, including “When We’re Together”—a song in which Kristoff, Anna, Elsa and Olaf realize that being together with loved ones is the best part of the holiday season. Featuring the voices of Jonathan Groff, Kristen Bell, Idina Menzel and Josh Gad, “Olaf’s Frozen Adventure” opens in front of Disney•Pixar’s original feature “Coco” in U.S. theaters on Nov. 22, 2017. ©2017 Disney. All Rights Reserved.

For the bottom part of Olaf’s body, draw the same shape, but larger in width and height. For Olaf’s legs, draw two curvy rectangles that are about the same height as the middle of Olaf’s body but narrower. Complete Olaf’s body by adding the circle for his buttons.

Go back over any lines that you want to darken to add emphasis or character to your drawing of Olaf. Erase any sketch marks you no longer want. If I left out anything, my apologies. Our animators were so quick. The drawing came so natural to them. I did my best to keep up while also taking notes. I am sure your drawing is awesome, but you can add color to Olaf’s carrot nose and coal buttons if you so desire. 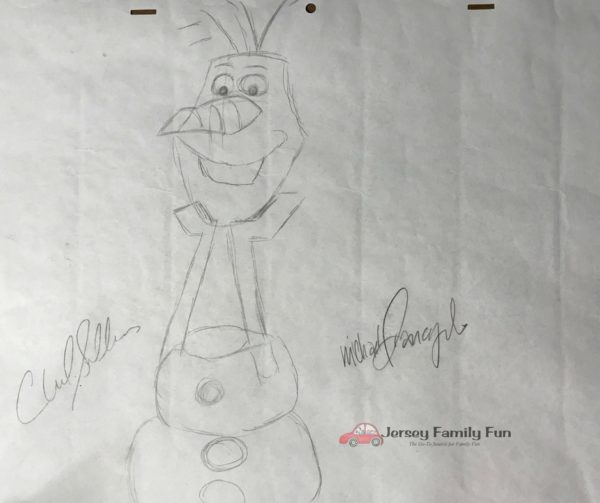 Now go show off your great work! I’d love to see your drawings of Olaf and from Olaf’s Frozen Adventure. Share them with us on our Facebook page at facebook.com/jerseyfamilyfun #OlafsFrozenAdventure.

Our stories with the creative team at Disney Pixar COCO about how they created the characters and animation in the COCO movie.

My Disney Pixar COCO movie interviews with the cast and producers

Oh wow, you did a fantastic job drawing Olaf. What a fun experience. We are big fans and can't wait to watch this short again at home.