Mount Tammany, a peak of the Kittatinny Mountains on the New Jersey side of the Delaware Water Gap, is a hike that I had been eyeing for a while. After reading about this hike, I worried that it might not be particularly kid friendly. It wasn’t the distance that worried me, but the elevation to the peak. However, after spending much of the summer outside and successfully completing many hikes, I decided that the kids were ready to hike Mount Tammany.

Is it possible to hike Mount Tammany with kids?

I’ll provide a spoiler to this article and say that to hike Mount Tammany is not particularly little kid friendly, although it depends on the child. In fact, during the entire hike, we only encountered one other family with a child. My 7 year loved the hike and the steep rock scramble was her favorite part. My 4 year old son, on the other hand, stopped in the middle of the trail and screamed at the top of his lungs, “I hate this hike,” scaring off any wildlife that may have been lurking, as well as nearby hikers. At that point, we were near the peak and a few cookies helped us reach the summit. His mood changed dramatically at the summit and he enjoyed his snacks and chatted happily the entire length down. 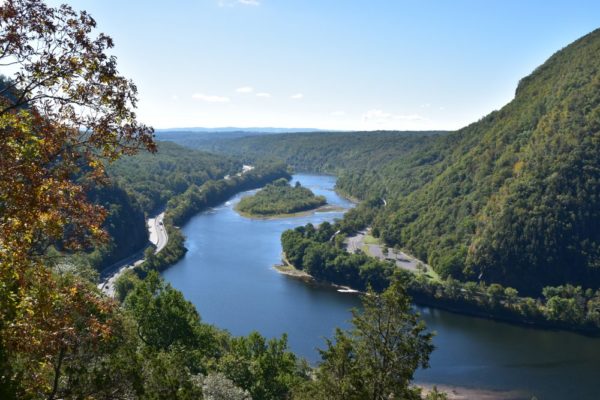 About the hiking trails at Mount Tammany of the Kittatinny Mountains

Mount Tammany is located in Worthington State Forest and is a particularly popular, albeit challenging, loop in the Delaware Water Gap. (Learn more about the Worthington State Forest at the NJ Division of Parks and Forestry site.) It is recommended to hike the Red Dot trail to the summit and then take the Blue Dot trail down. The Red Dot trail requires scrambling up rocks on rather steep terrain as it climbs approximately 1200 feet in 1.5 miles. The Blue Dot trail, although rocky, is more gradual. The Red Dot trail would be difficult to negotiate going down. Most online sources claim this loop is around 3.5 miles, but I can confirm that it feels a lot longer due to the steep, rocky terrain. 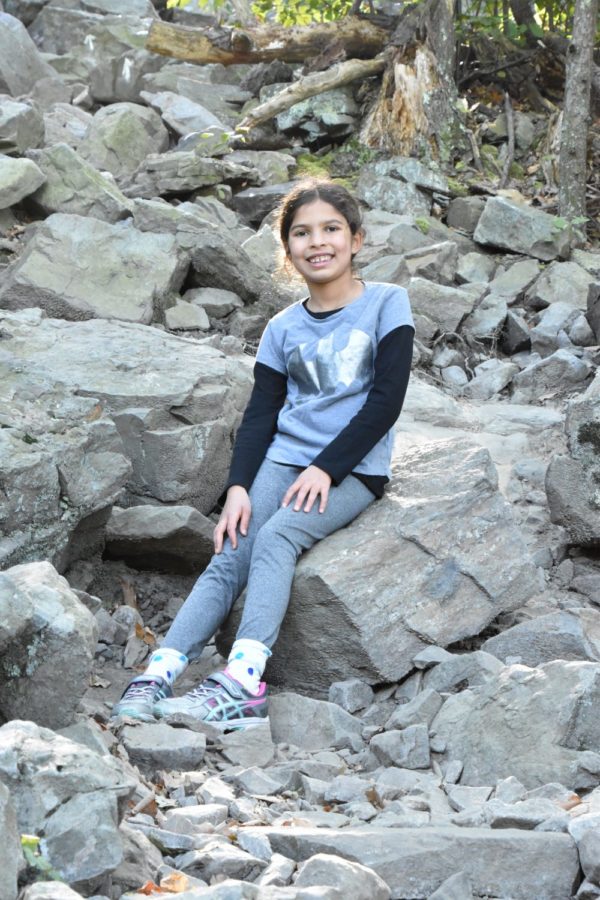 We arrived early one Sunday morning in October, eager to explore this trail. Although it was only 9:30 a.m., the parking lot and Mount Tammany trail were quite crowded. We started strong, but I quickly realized that this trail was going to be a bit more challenging than anticipated. As recommended, we started our ascent on the Red Dot trail. My daughter and husband quickly scrambled up the rocks racing each other, whereas my son and I trudged along carefully to avoid slipping. After a steep climb up, we reached the first panoramic viewpoint and it was simply stunning. This view gave us motivation to continue the trail, although the rocky terrain to hike Mount Tammany continued. 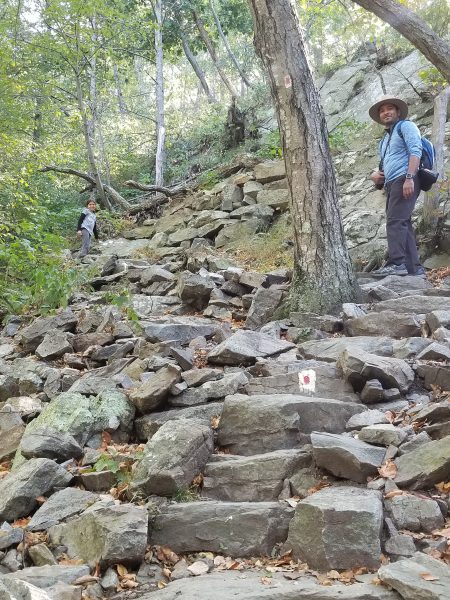 After a couple of hours negotiating the Red Dot trail to the summit, we were rewarded with amazing panoramic views of the Delaware River and Mount Minsi. As we typically do at the peaks of mountains, we feasted on our snack of sandwiches, cookies, and fruit, while taking in the gorgeous views. 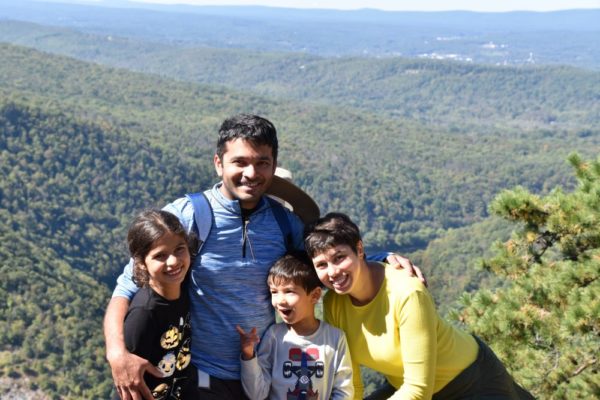 With a renewed burst of energy, we began our decent on the Blue Dot trail. Although steep in sections, this trail is much more moderate and descends gradually compared to the Red Dot trail. Towards the base of the mountain, we reached Dunnfield Creek, which is a great place to dip your feet in the water and take a well-deserved break. The Blue Dot trail continues through the forest, follows the creek, and eventually connects to the Appalachian Trail (white blazes), which leads to the parking lot. 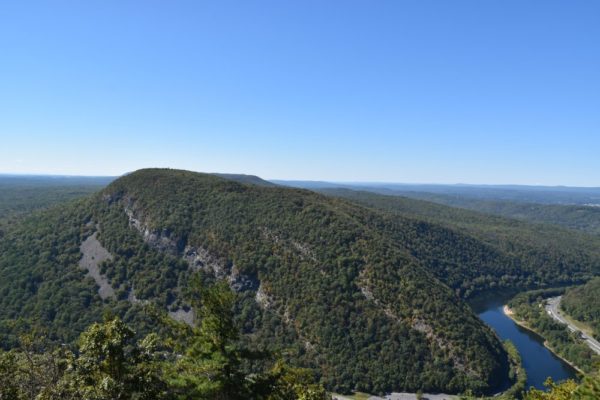 Despite being one of the more difficult hikes we have attempted with kids, the views are definitely worth the effort.  I would recommend this trail for older children who will enjoy the challenge of making it to the peak, but definitely don’t forget your sturdy hiking shoes, water, and snacks!

After we finished the hike of Mount Tammany, we spent some time splashing in the water and skipping rocks on the Delaware River. As a reward for completing our hike, we decided to venture over to Village Farmer and Bakery in Delaware Water Gap for some barbecue and apple pie – delicious! It was a perfect way to unwind and relax after a fulfilling hike at Mount Tammany. 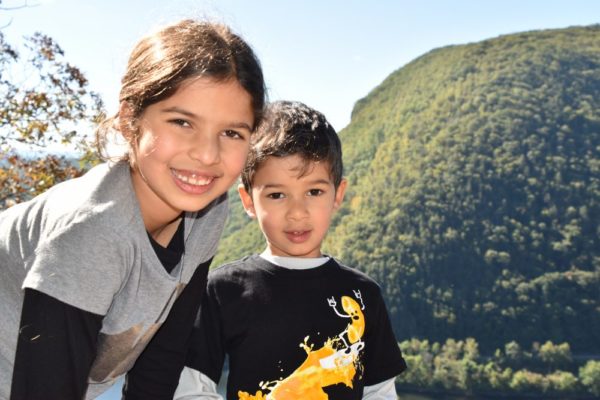 Despite the brief outburst of disgust from my son on the Red Dot trail, we all actually really enjoyed scrambling up the never-ending rocky terrain. The panoramic views of Mount Minsi (on the Pennsylvania side) and of the Delaware Water Gap from the top of Mount Tammany are incredible. Even my son later admitted that this was one of his favorite hikes (although he may have been thinking of the apple pie we ate afterwards)! 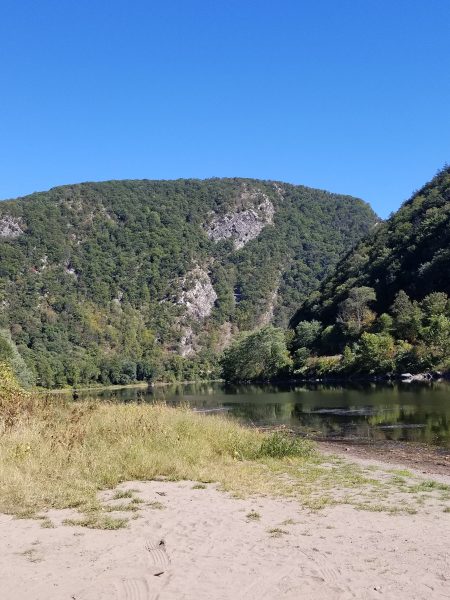 Want to hike more with your kids?

Check out these Jersey Family Fun blog posts about hiking. 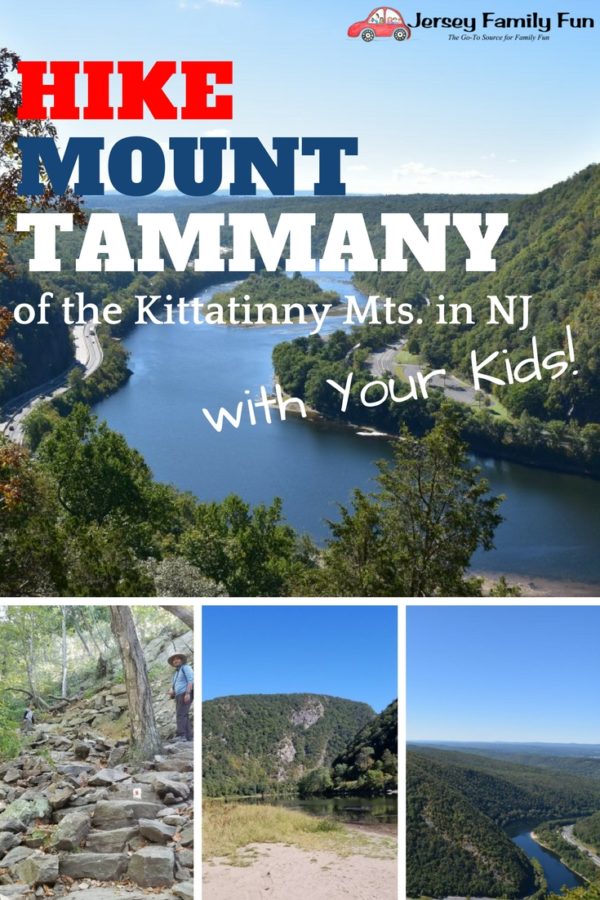