This post was made possible by Hersheypark who invited us to the Hershey’s Chocolate World press event. We appreciate their support of Jersey Family Fun that allows us to share with families information about travel destinations we think families will enjoy. 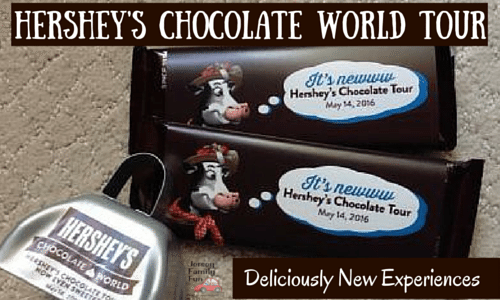 My family and I recently had the opportunity to visit Hershey’s Chocolate World for the unveiling of their newly reimagined chocolate making tour. Upon our arrival, we were met with hundreds of excited patrons who were already lined up for the event at 8:30 am on a Saturday morning! As we entered the building, we were greeted by the always cheerful Hershey’s Chocolate World employees, who donned cow ears for the occasion. Everyone received a gift bag, complete with a cow bell (what’s with all the cow stuff?!), as well as some other Hershey’s goodies, including, of course, a Hershey bar with a commemorative wrapper for this special occasion. 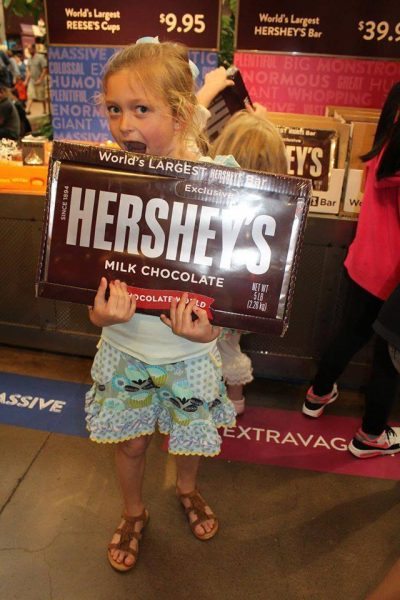 Everyone gathered around the big Hershey bar banner, where Todd Kohr, marketing manager for Hershey’s Entertainment, spoke to the crowd about the renovations, while surrounded by the Hershey’s characters. Kohr explained that while the process for making Hershey’s chocolate has not changed much since the tour opened in 1973, the technology to tell the story has, and so it was time for a change.

This was the third time the Herhey’s Chocolate World tour has been updated since it’s opening. The most popular aspect of the tour, the singing cows in the barnyard scene, was where a lot of the reimagining happened (So THAT’S what’s with all the cow stuff!). Seven more cows were added to the scene, who were named by Hershey employees and voted upon by fans in the HERSHEY’S CHOCOLATE WORLD’s “Cow Naming” Contest. The names chosen were Mocha, Hazel, Caramel, Cocoa, Strawbella, Blossom, and finally “Derry”, whose name was not released to the public until that moment, just before the ribbon cutting. The name Derry is symbolic, not only because of the dairy implication, but because Milton Hershey originally opened his chocolate factory in Derry Township, Pa. in 1905. 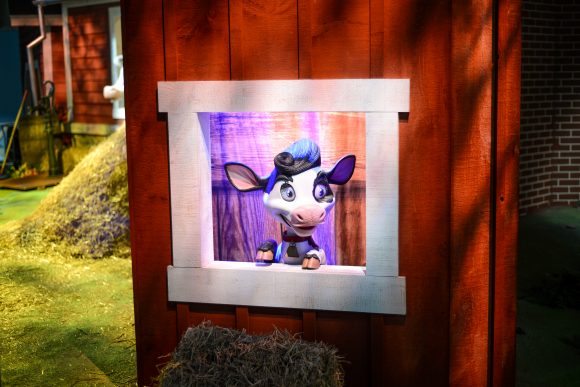 One of the cute cows that greet you at Hershey’s Chocolate World!

After that, it was time for the ribbon cutting. The excited guests were encouraged to ring their cowbells while the employees and Hershey’s characters lead the countdown. As soon as the ribbon was cut, guests scurried past the huge painting of Milton Hershey and into the newly renovated candy cars to begin the Hershey’s Chocolate World Tour. The first thing we all noticed was those cute cows, singing their little hearts out to their song “Taste the Love”. Next, we learned all about the process of making chocolate, beginning with the finest cocoa beans, all the way through the melting and molding process and on to the wrapping. By the end of the tour the sweet smell of Hershey’s chocolate filled the air! The kids were excited to learn that in honor of the opening of the new tour, DOUBLE samples were being handed out at the end of our ride. That’s right! We each got 2 fun sized Hershey’s bars to take with us. This was our first time experiencing the Hershey’s Chocolate World Tour, and we all loved it!

After the tour, we took a look around the Chocolate World shop, as well as the café, where there were way too many delectable treats to choose just one. Fresh baked cookies, brownies, milkshakes, ice cream…you name it! Hershey’s Chocolate World Tour has something for everyone! 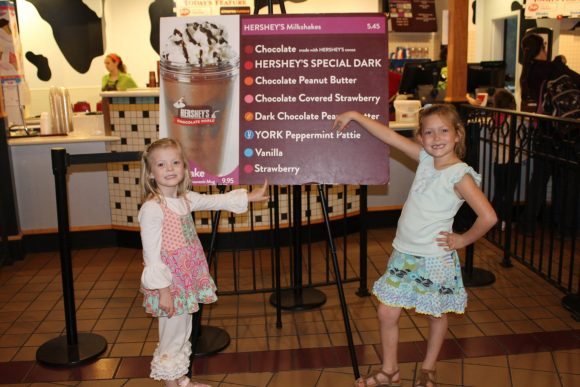 We were loving all of the flavor options in the Café!

The Chocolate Tour remains FREE to visitors of Chocolate World.

For more photos from our visit to the Hershey’s Chocolate Tour at Hersheypark, please visit our Facebook photo album.

Click over to see the rest of our Family Travel to Hersheypark series. 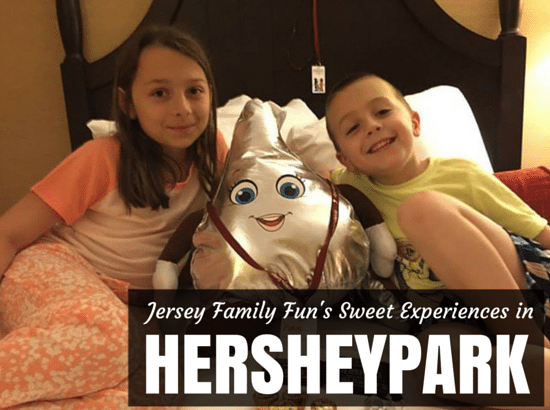 In full disclosure this post was made possible by Hersheypark as part of a media tour we attended, but as always all opinions are our own.