Do your kids like to get grossed out? Do they make slime and play with bugs?

Get grossed out with Zuru Smashers Series 2

Recently, we were asked to test out and introduce Zuru Smashers to you. This new toy has everything gross kids love.. slime, bugs, ooze dudes, filthy food, and icky insects. Can it get better? Yes! To play with Zuru Smashers kids have to SMASH the eyeball balls to reveal what grossness is inside. Eww for me, but fun for my sons. Take a look at how they work and the hilarious fun that broke out as two of my sons SMASHED eyeballs from the new Zuru Smashers Series 2 Gross collection.

Smashers are the latest collectible toys from ZURU that kids are sure to love! The innovative Smashball puts the action right in your hands. What’s inside the new series of Smashers Smashballs? Just throw and smash your eyeball to reveal your surprise of 1 of over 100 gross characters inside! Rebuild and re-smash your Smashball anytime! Keep track of your entire collection with the free Collector’s Guide inside ever pack or download the Smashers app. The Smashers app allows you to play games, interact with your collection, and collect Smash Points to become the ultimate Smashers champion.

For more information or to learn where to buy Zuru Smashers Series 2 – Gross visit smashersworld.zuru.com. Nothing gross here… Just my boys playing together nicely as they study the collection of Smashers Series 2 – Gross and predict which ones they will get.

Not all figures are pictured. From my 10 year olds 8 pack of Smashers From my 12 year olds 8 pack of Smashers.

Now, all this grossness had me thinking about New Jersey. We have so many fun family attractions and plenty of them offer a level of grossness that every kid can appreciate. Just like the Zuru Smashers Series 2 Gross offers different collections of grossness so do some of our favorite places to visit in New Jersey. A poster of the entire Zuru Smashers Series 2 – Gross collection comes with every 8 pack. There are 100 different GROSS Smashers your kids can collect. Store them on a shelf or rebuild the Smashers to smash again another day.

Take a look at some of the grossest, yet fun, places to visit in New Jersey with kids. You may not find these Smash Trash figures from the Zuru Smashers Series 2 – Gross collection at the ACUA, but you will find some smelly trash and gross wastewater.

Located in Egg Harbor Township, the Atlantic County Utilities Authority makes what would normally be gross, fun and educational. The 360 acre property offers public tours for individuals and groups. We’ve taken them both as a family during their Earth Day event and planned group outings for our readers. On the tours, kids can learn how the ACUA machines Smash Trash and where poopy water goes when we flush it down the drain. You may never think about Toilet Humor the same when you’re standing next to the tanks that clean 28 MILLION gallons of wastewater a day at the Wastewater Treatment Facility. Learn more about visiting the ACUA at their website or call 609-272-6950.

The Zuru Smashers Series 2 Gross Icky Insects collection may look like real bugs but you can touch the real thing at the Insectroplis in Toms, New Jersey. View thousands of beautiful and bizarre exotic insects from all over the world if you dare. Kids can play bug games on touch-screen computers or pretend to be a termite and crawl through a mudtube. See how ants forage for food and build tunnels in a live ant nest. There’s not just one type of bug you can touch at the Insectropolis, there’s a multitude. Touch a live tarantula, scorpion, millipede, and a hissing cockroach before you leave. Don’t worry moms, if you don’t want to get grossed out by seeing icky insects up close you can look at the insects from a distance too. Learn more at their website insectropolis.com or call (732) 349-7090. Want to hunt for a Trex in the dark? Or pet a baby dinosaur with the help of a paleontologist? Whether you find dinosaurs to be rare awful animals or really cool creatures, you can visit with them at Field Station Dinosaurs in Leonia, New Jersey.  Part scientific expedition, part creative artistry put to work, Field Station Dinosaurs brings over thirty life-sized, realistic dinosaurs to life every June through October in Bergen County’s beautiful Overpeck Park. Scientists have worked to ensure that the exhibition encompasses the latest theories and discoveries in the fields of paleontology, geology, and environmental studies. There’s more to this NJ family attraction that seeing the dinosaurs.

What makes this one of the gross places to take kids in New Jersey? When you visit you’ll learn some pretty gross facts about dinosaurs like what their poop looks like and how to tell what they eat by examining it. Learn more at their website fieldstationdinosaurs.com or call (973)748-4317 or read about our visits to the Field Station Dinosaurs. Find more local places to find dinosaurs in this article, Places to See Dinosaurs in New Jersey (and Beyond). During Field Station Dinosaurs after dark events you can go on an expedition for a T Rex.

At the Liberty Science Center in Jersey City, New Jersey the grossest exhibit they have is the Microbes Rule! It’s an interactive exhibit where guests can interact with odd bodies in a number of ways. 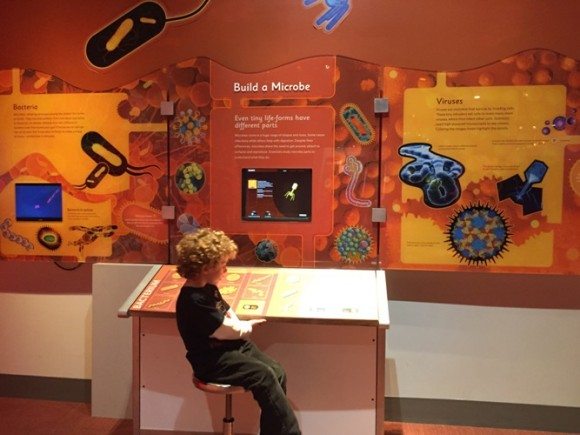 Are you ready to battle odd bodies and body invaders at the Liberty Science Center’s Microbes Rule! exhibit?

But that’s not all the Liberty Science Center offers that could be considered gross. There are bees buzzing in a bee hive on the third floor, an area where you can walk through the brain, and tanks full of creatures that call the Hudson River home. Learn more about the Liberty Science Center in these articles or by visiting their site https://lsc.org or calling (201) 200-1000. These Odd Bodies are just as gross as some of the germs in our body that we’ve learned about at the Liberty Science Center.

You won’t find any glow-in-the-dark dirty diapers or rotten feet at the Adventure Aquarium, but you can find a number of luminescent creatures that live in the sea. Making it the last of the GROSS places to take kids in New Jersey that we’re recommending. The Adventure Aquarium in Camden, New Jersey features one-of-a-kind exhibits with more than 15,000 aquatic species throughout two million gallons of water. Two of the figures from the Zuru Smashers Series 2 – Gross Glow in the Dark collection are Dirty Diapers and Rotten Foot.

The extensive collection includes a tank of Pacific Sea Nettle, jellyfish that seem to glow in the dark. This unique species of aquatic invertebrates have a distinctive gold-brown bell with reddish tentacles. They can typically grow up to 12 inches in diameter. In addition, they have four arms attached to their mouths, with tentacles along the body capable of extending many feet. Eww.. it glows in the dark and is gross. Learn more about the gross, unique, and rare animals at the Adventure Aquarium by reading our articles or visiting their website www.adventureaquarium.com or call 844-474-FISH (3474). To see real glow in the dark animals visit the Adventure Aquarium. Photo shared with permission from K. Mastro.

While there’s no one regular place that offers slime-making fun, from time to time there are events across New Jersey where kids can make slime. Visit our Calendar of Events or watch the calendar at these local businesses who have been known to offer slime-making events.

and don’t forget when your kids smash an eyeball from a Zuru Smashers Series 2 Gross 8 pack they may get a surprise of slime! We found 1 in each of our 8 packs. But don’t worry moms! The slime doesn’t explode when the Smashballs are smashed. The slime is contained in a packet inside the eyeball. Once you open the foil packet the slime oozes out to reveal a figure from the Gross collection. For my boys, one got the glow-in-the-dark dirty diaper and the other got the rotten foot. For more information or to learn where to buy Zuru Smashers Series 2 – Gross visit smashersworld.zuru.com.

Where’s the grossest place your kids have been to in New Jersey?