I have been sharing my experiences of visiting Los Angeles for the Mary Poppins Returns Event over the last few days. I hope you haven’t missed any of it, but if you have you can click on Mary Poppins Returns movie to get caught up. Today, I’m sharing what I learned during our interview with Pixie Davies and Joel Dawson who play Anabel and Georgie Banks. 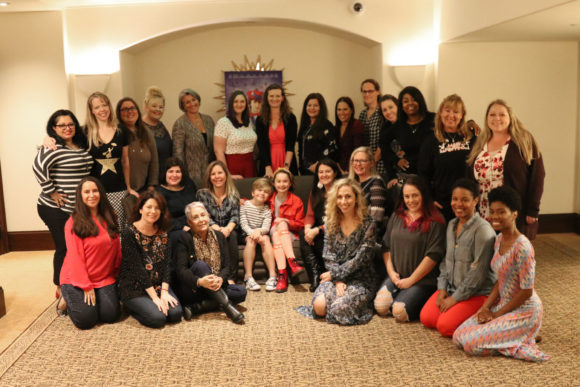 Pixie Davies and Joel Dawson were a delight to interview. Poised, youthful, and yet mature it was a joy to see them in person and listen to them talk and answer our questions about being part of  the Mary Poppins Returns movie. Like all kids they talk fast and had a lot to say. We covered a lot in our 20 minutes together and I’ve done my best to pull it all together. Take a look at my top 10 things Pixie Davies and Joel Dawson had to say about Mary Poppins Returns. 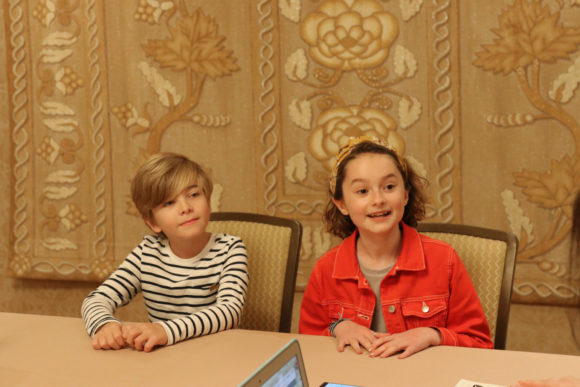 Joel says, “I really liked the part when I had to dive through the bushes and then got dragged along by the kite. That was a really fun scene.” For Pixie, she said, “I think it was Tripping the Light Fantastic because it was just incredible watching the dance. It just gets better every time.“ 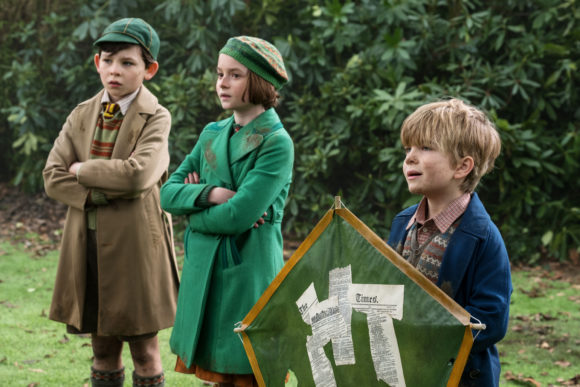 This is the ending of the scene Joel was referring to as his favorite. Nathanael Saleh is John Banks, Pixie Davies is Annabel Banks and Joel Dawson is Georgie Banks in Disney’s MARY POPPINS RETURNS.

What did Pixie Davies and Joel Dawson think about the costumes they got to wear?

Pixie seemed to be the most fascinated by the costumes. Here’s what she had to say while reflecting on them.

“They were beautiful. They were. I really liked them ‘cause I like dressing kind of funky.  And it was really awesome wearing some really cool clothes from another century.” Pixie later had more to say when talking about what she would want to bring home from the film. ” Costumes, because they were amazing, and the animated sequence, that was hand-painted and handmade.  All the costumes are handmade but the hand-painted ones are really, really special because they had gone through so much like process of doing all of that. That was really so special that people go through all of this hard work just for you.”

This scene has the handpainted costumes Pixie refers to as wanting to take home. Emily Blunt is Mary Poppins, Lin-Manuel Miranda is Jack, Pixie Davies is Annabel, Nathanael Saleh is John and Joel Dawson is Georgie in Disney’s MARY POPPINS RETURNS, a sequel to the 1964 MARY POPPINS, which takes audiences on an entirely new adventure with the practically perfect nanny and the Banks family.

Of course finding out they were going to be cast as the Banks children in Mary Poppins Returns was an exciting moment for Pixie Davis and Joel Dawson. Here’s how they described it. Pixie shared, “I thought I was gonna burst.” 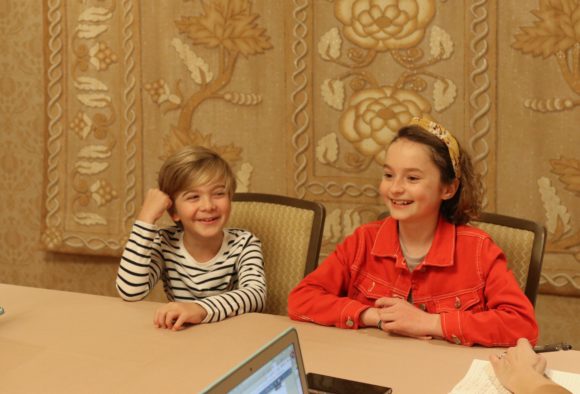 Joel had a bit more to say. “Well my agent already knew so she came over. As she was there, then Rob Marshall called me and he said we want you to have the part. I had it on speakerphone and everyone was just so silent and my eyes were watering. And my mum was squealing after the phone call.“

With so many songs, could Pixie Davies and Joel Dawson pick a favorite one? They both admitted it was hard but in the end Joel said his favorite song was Underneath the London Sky. Pixie’s favorite song is Tripping the Light Fantastic. She refered to it as ‘fun and dancey‘. 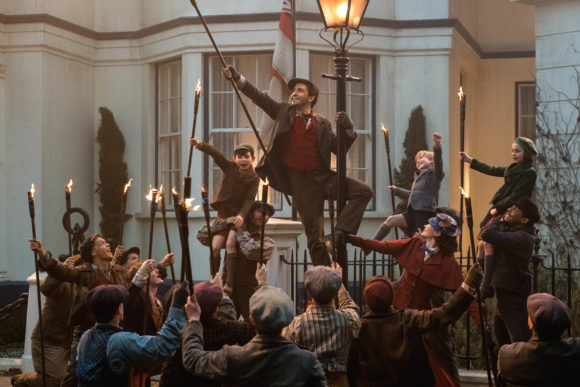 How long did Pixie Davies and Joel Dawson film for Mary Poppins Returns? What did they do during breaks from the film?

Total production time for Pixie and Joel’s roles in Mary Poppins Returns took seven months; two months of rehearsals and five months of shooting. In between rehearsals and shooting, Pixie described their down time as “We had tutoring a lot, which was, it was okay, you know, it was tutoring. But we had quite a lot of fun. We had like tents, and there was a place (a tent with catered food that Pixie and Joel called) the most magical place on earth.“

Emily Blunt is Mary Poppins, Joel Dawson is Georgie, Pixie Davies is Annabel and Nathanael Saleh is John in Disney’s MARY POPPINS RETURNS, a sequel to the 1964 MARY POPPINS, which takes audiences on an entirely new adventure with the practically perfect nanny and the Banks family.

The best food on the set of Mary Poppins Returns

It was that talk, about what they did between filming, that got Joel’s mouth watering as he started to remember an epic treat they had on the set. He recounted “I remember one day they had a chocolate water fountain with marshmallows and cookies.” Pixie added that it had strawberries too. It was just there as a surprise. There was no special reason but it’s one of the ways the production team kept things fun for the kids. 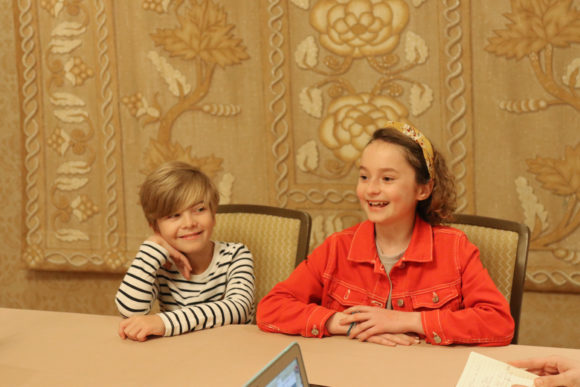 Pixie explained what it was like to film such an unusual topsy turvy scene with Meryl Streep who plays Topsy in Mary Poppins Returns. “It was really, really, really crazy, because you don’t look at things in that perspective, ever, unless you look between your legs and nobody really does that. So that was really, it was really fun.“ 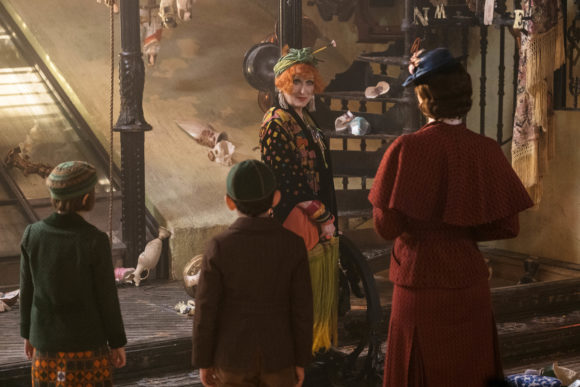 Emily Blunt is Mary Poppins, Meryl Streep is Cousin Topsy, Pixie Davies is Annabel Banks and Nathanael Saleh is John Banks in Disney’s MARY POPPINS RETURNS, a sequel to the 1964 MARY POPPINS, which takes audiences on an entirely new adventure with the practically perfect nanny and the Banks family.

What was it like flying on Mary Poppins Returns

In one of the final scenes Pixie Davies and Joel Dawson are flying through the air with the use of cranes and harnesses. From what it sounded like Pixie handled it a bit better than Joel. Take a look at what the both had to say.

Joel said, “It was fun, kind of uncomfortable though.”

Pixie handling it like a champ explained, “The harnesses are uncomfortable but that’s okay.”

So when you watch that scene just remember how much work Pixie and Joel had to put into making flying look easy.

A lot of the acting Pixie and Joel had to do in Mary Poppins Returns was in front of a green screen. They had to imagine dancing penguins and going under the water and all the other animated scenes. Here’s how Pixie described it when she saw all those moments come together on the screen.

Then you watch the film and you’re like oh, that’s so detailed.  There are things on the camera that it picks up, that you don’t pick up in your eye. You sort of watch the film and you’re like oh, I didn’t realize that was there, or oh yeah, I remember that. Then sometimes it’s just a bit of a surprise ‘cause if you were actually there then it’s a bit confusing if you see something that wasn’t there. 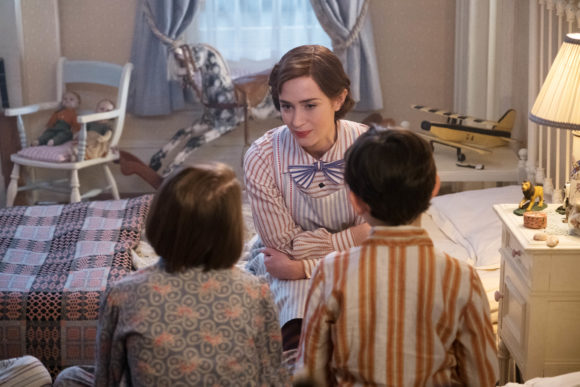 Emily Blunt is Mary Poppins in Disney’s MARY POPPINS RETURNS, a sequel to the 1964 MARY POPPINS , which takes audiences on an entirely new adventure with the practically perfect nanny and the Banks family.

Advice for other kids who want to become actors

Pixie reflected on the advice the older, more experienced actors gave her, ‘just be yourself, do what you think is right.‘ When it came to her advice to other kids who want to act she suggested, “If you really want to pursue it then just do, because honestly it’s the greatest feeling when you’re on set, and it just gives you that buzz.”

Joel added with a matter of fact kind of face, “Business is business.” That gave us all a chuckle and we may have repeated his words of wisdom throughout the rest of the trip. So young but kind of a pretty grown up message. 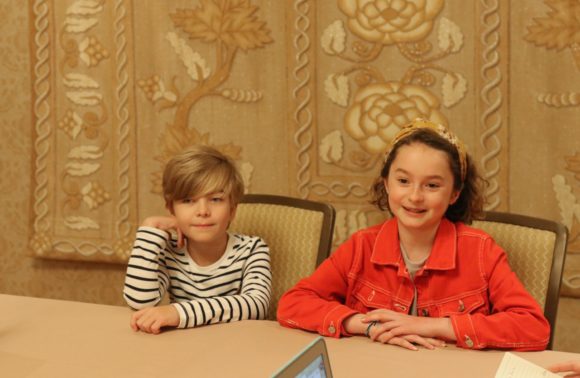