I was honored to be invited to the #MaryPoppinsReturnsEvent, a Disney press junket for Disney Mary Poppins Returns. As a guest, my expenses were covered in return for a series of articles about my experiences and reviews of the programming.

I have been sharing my experiences of visiting Los Angeles for the Mary Poppins Returns Event over the last few days. I hope you haven’t missed any of it, but if you have you can click on Mary Poppins Returns movie to get caught up. Today, I’m sharing what I learned during our interview with Ben Whishaw and Emily Mortimer who play Michael and Jane Banks.

In the original Mary Poppins, Michael and Jane were young children who sent off a note about a special nanny they were requesting. In Mary Poppins Returns, Michael and Jane are back but now they are all grown up. Michael has 3 children of his own: Anabel, John, and Georgie and finds himself leaning on his sister to get through a difficult time. Once again, Mary Poppins returns to with her magic and playful manner to bring hope to a desperate situation.  I hope you’ll enjoy my highlights. 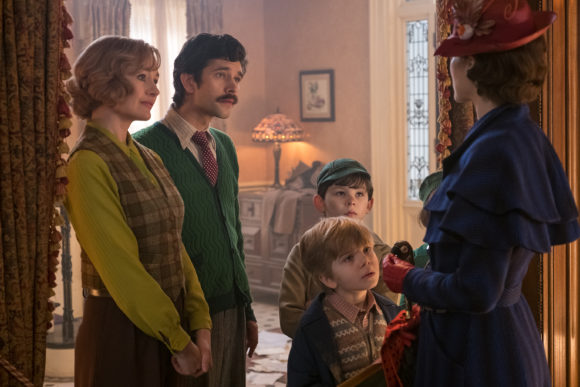 It was clear in our interview with Ben Whishaw and Emily Mortimer that these two had a chemistry free from sibling rivalry. They laughed at the same thing, talked about having the same vices and favorite moments from the film, and finished each other’s sentences. 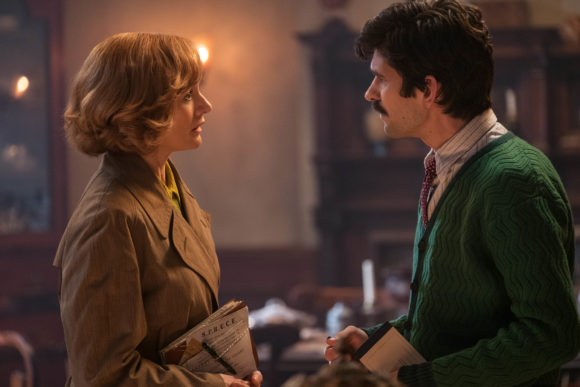 Emily Mortimer is Jane Banks and Ben Whishaw is Michael Banks in Disney’s MARY POPPINS RETURNS, a sequel to the 1964 MARY POPPINS, which takes audiences on an entirely new adventure with the practically perfect nanny and the Banks family.

Ben says of his chemistry with Emily, “We were really lucky. We just immediately got along and enjoyed each other’s company, and giggled about things and gossiped.” Emily added that weeks and weeks of rehearsals and then filming gave the two of them time to truly develop their friendship.

Take a look at their special moments from being a part of Mary Poppins Returns. 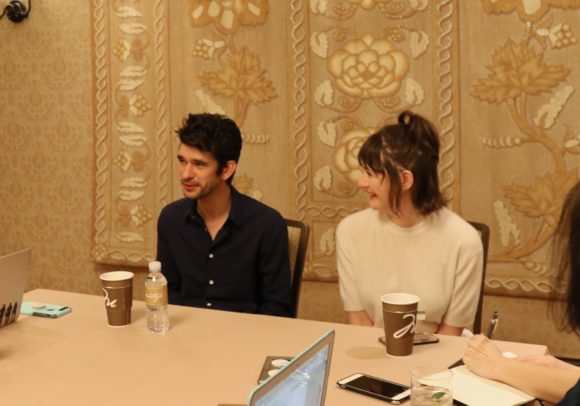 Reflecting on the joy of working with director Rob Marshall

Rob Marshall has said repeatedly through the interview process he got his first choice of all the actors for Mary Poppins Returns. Ben Whishaw reflected on what that meant to him and what it meant to have Rob Marshall as an encouraging director. 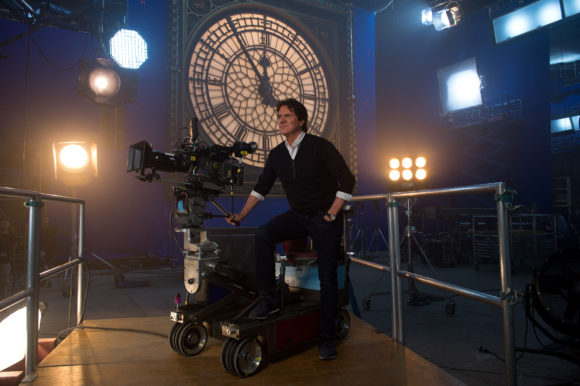 Emily added, “My dad always said that if you tell people they’re beautiful or wonderful and clever and talented and special and amazing, they are.” Emily talked about how Rob had a way of building the cast up, of making them believe in themselves. She continued, “He’s so encouraging and makes you feel special … It’s great.”

Emily Mortimer brought her 15 year-old son, Sam, to the Los Angeles World Premiere of Mary Poppins Returns. When we spoke she was also planning to bring her 8 year-old daughter, May, to the premiere in London.

She said, “It’s such a treat to come to these things, but you forget, because you get stressed out about (how you look and sound). You’re put up in these incredible, fancy hotels, and given delicious food, and get to be around all these wonderful people. When you bring your kids, you see it through their eyes, and, and you appreciate it. We’ve had such a sweet time together these last few days. I just kind of look over at him, and seeing his little face. It just makes it all seem okay.“ 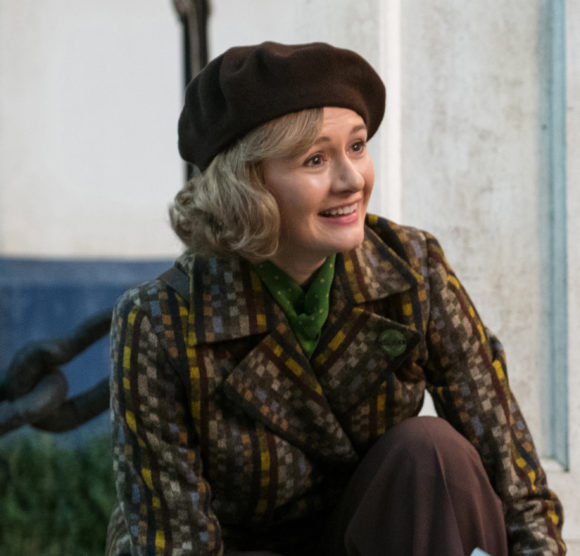 Emily Mortimer is Jane Banks in Disney’s MARY POPPINS RETURNS, a sequel to the 1964 MARY POPPINS, which takes audiences on an entirely new adventure with the practically perfect nanny and the Banks family.

Are the Banks children’ children excited for Mary Poppins Returns?

Emily’s children have seen the original Mary Poppins and loved it. Her children are excited for Mary Poppins Returns. Emily shared with us a precious moment she had with her daughter while in a bookstore.

“May found my picture in this (book). We were in Barnes & Noble the other day and she found the book of Mary Poppins Returns, which I didn’t realize they did a book. But there was Emily Blunt was on the front. Then she found a photo of me. She’s never been more impressed by me ever. It was so funny. She kept telling everyone we met. Mom’s in a book!” 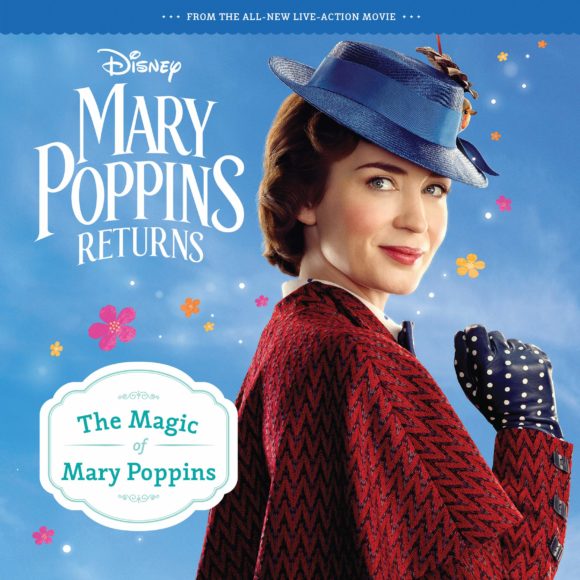 What was their most challenging scene in Mary Poppins Returns

For both of Ben and Emily it was the scenes where the emotions truly had to come in play for their characters Michael and Jane Banks, these are the moments that they felt the most challenged.

Ben shared, “I think that the final scene when we’re on the balloons was quite challenging. I mean, everything was. But that had to be the climactic moment.” He was describing going from being stressed and miserable to being joyful and relaxed. He continued, “It’s weirdly much easier sometimes to play misery, grief or whatever. Being open-hearted and happy can be quite hard.” 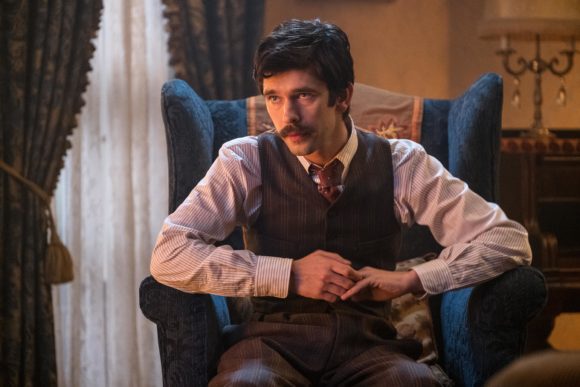 Experiencing some grief, Ben Whishaw is Michael Banks in Disney’s MARY POPPINS RETURNS, a sequel to the 1964 MARY POPPINS, which takes audiences on an entirely new adventure with the practically perfect nanny and the Banks family.

Emily chose a different moment as her most challenging. “I remember feeling quite confused by how to be when we walked into the (Banks’) house, and it was all empty of all the furniture, and we were clearing out the stuff, and saying goodbye to the house. The temptation was to be (devastated). This is a terrible moment in their lives.” Emily struggled to show Jane as upbeat and trying to make the best of the situation. She added how director Rob Marshall helped, “Rob was really good, and he said ‘you’ve done your grieving. Just say goodbye to your house and try to be. Because the sadness is going to come from seeing people trying to be happy.‘” 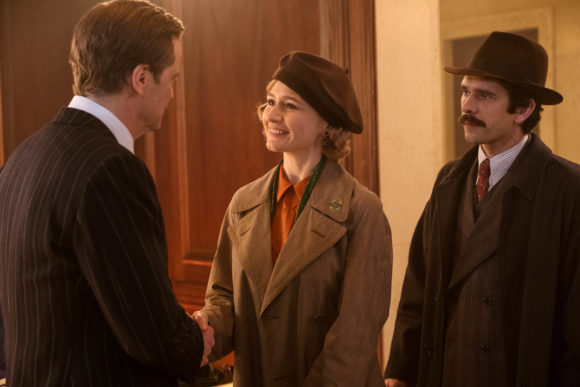 Colin Firth is Wilkins, Emily Mortimer is Jane Banks and Ben Whishaw is Michael Banks in Disney’s MARY POPPINS RETURNS, a sequel to the 1964 MARY POPPINS, which takes audiences on an entirely new adventure with the practically perfect nanny and the Banks family.

Emily added, “As an actor, when you put up this sort of sad moment, you’re tempted to really sort of milk it. I remember feeling grateful to his (Rob’s) direction at that moment where he was like keep it optimistic for the children.”

Both Ben and Emily agreed that the big dance numbers were their favorite scenes, especially the routine to Trip a Little Light Fantastic. They called it tremendous, amazing, breathtaking. Emily exclaimed, “Just when you think you’ve had enough, then along comes Dick Van Dyke, and… then there’s that dance. And just, like, more, more, more, more. It’s amazing. It’s .. So… Very cool.” 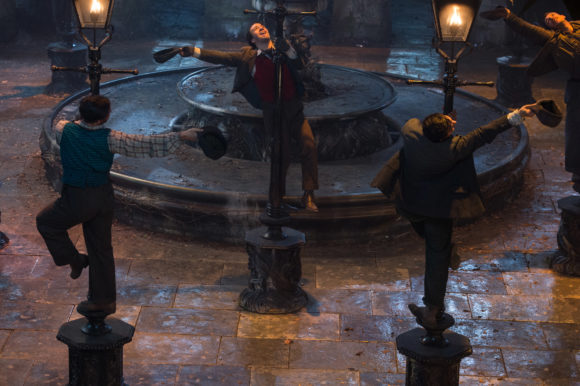 Lin-Manuel Miranda is Jack in Disney’s MARY POPPINS RETURNS, a sequel to the 1964 MARY POPPINS, which takes audiences on an entirely new adventure with the practically perfect nanny and the Banks family.

What will be your favorite scene in Mary Poppins Returns?