Are your kids getting cabin fever from being cooped up inside? It can be really hard to find a way for kids to release all their energy when the weather does not allow them to get outside. That is why I am grateful for indoor play places near me. One local great indoor play area that we recently discovered is in the Menlo Park Mall in Edison, New Jersey. The Disney Junior Play Zone has so many different activities packed into a small area of the mall. Children can run and climb to their hearts content. But the best part of this play zone is that it is completely FREE.  We found 5 things your child is going to love at the Disney Junior Play Zone, and a few things that parents will love!

Slide the car slide and crawl through a tunnel

The car slide and tunnel was a definite favorite among many of the children while we were there. The extra wide slide looks just like Lightning McQueen from Disney’s Cars. The stairs are easy for toddlers to climb and the wide slide has plenty of room for 2 children to slide at the same time. Which comes in handy on this very popular slide. When children aren’t going down the slide they can crawl through the tunnel that goes under the slide. My 6 year old had a blast going through the tunnel and my 1 year old loved his first experience on a slide. 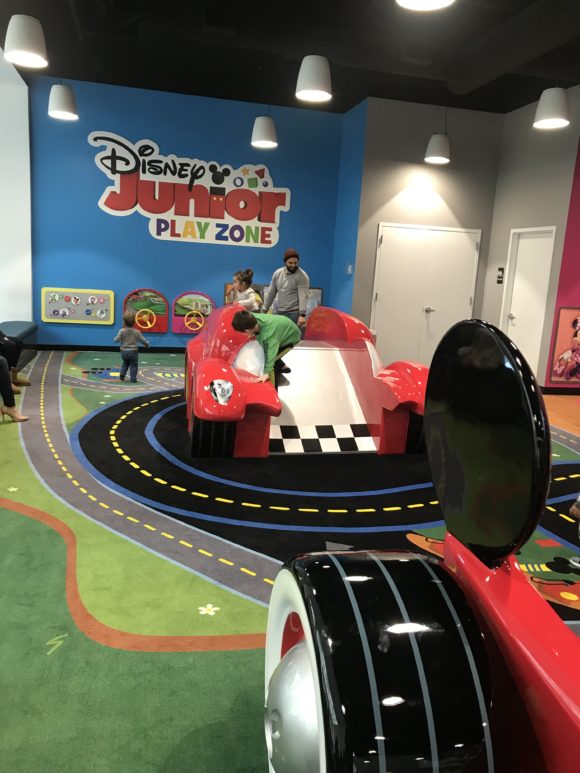 My 6 year old’s favorite part of the play zone was the giant music maker. Near the entrance to the play zone is a giant music makers with a Puppy Pals theme. Kids can step on the different keys on the floor to make different sounds. They can make their own tune or try to play along with the Puppy Pals on the screen. My 6 year old enjoy trying to following along with the pattern on the screen, but I think he enjoyed stomping around and making his own song even more. 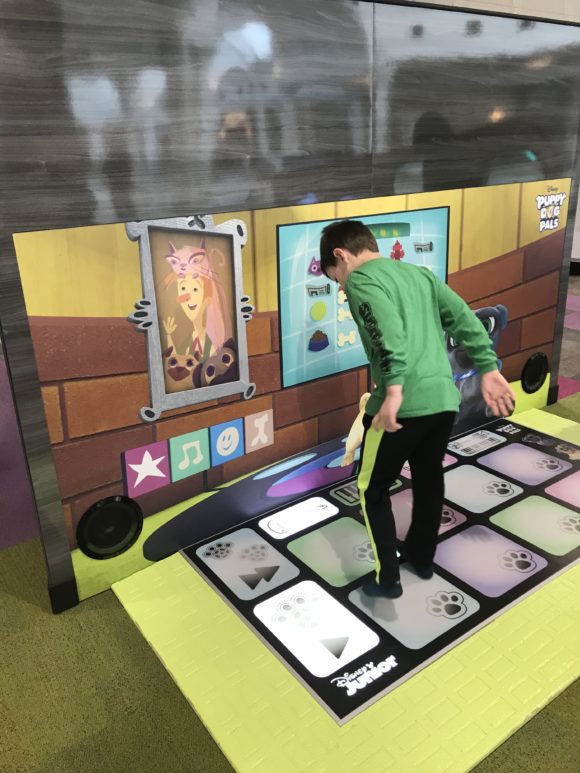 Right in the middle of the play zone are 2 giant race cars for the kids to play with. They are Mickey and Minnie themed and include a steering wheel and other car controls so kids can pretend to drive. They also include some games on the side of the car so several kids can be playing in the cars at once. 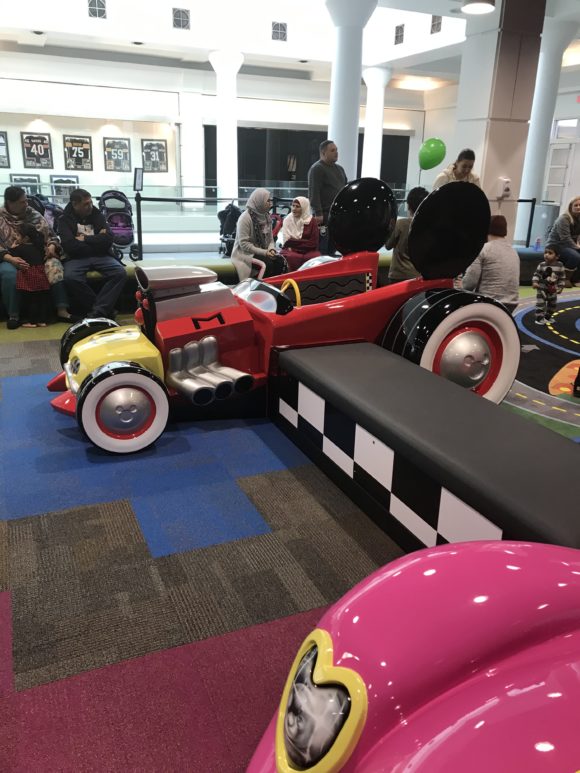 Play games on the Wall Full of Games

The fun at this local indoor playground near me is not limited to the big items in the middle of the play zone. The play zone is literally lined with fun things to do. Everywhere you turn their are tic tac toe boards, puzzles, and steering wheels attached to the walls. My kids just went down the wall from game to game. They had to check them all out. 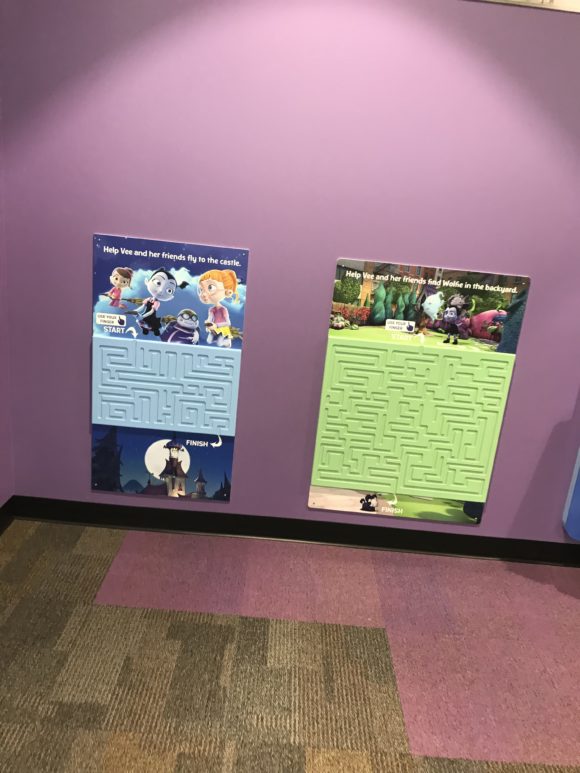 All of this play and excitement might tire a child out. The Disney Junior Play Zone in Edison has that covered too. There is a giant TV screen in the middle of the play zone and several smaller screens throughout that are playing various Disney Junior shows. Children can sit and watch the shows when they need a break or watch while they continue to play. 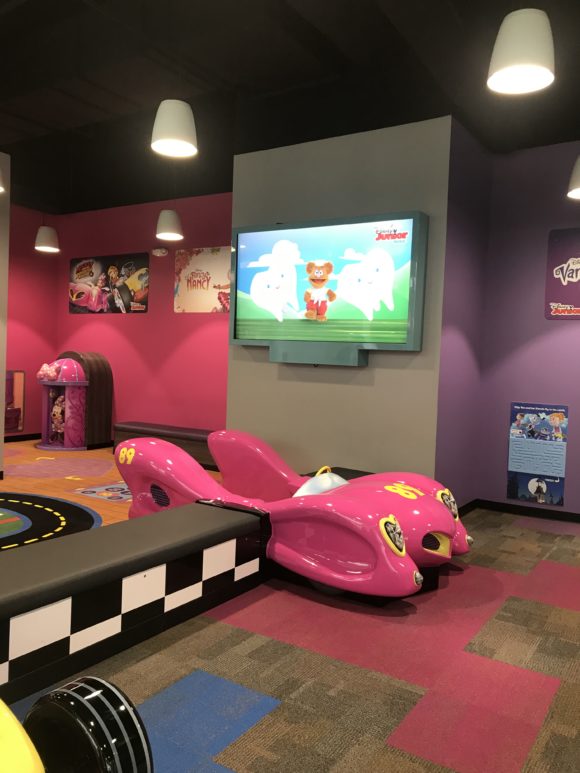 Watch our video tour of the Disney Junior Play Zone at Menlo Park Mall below. 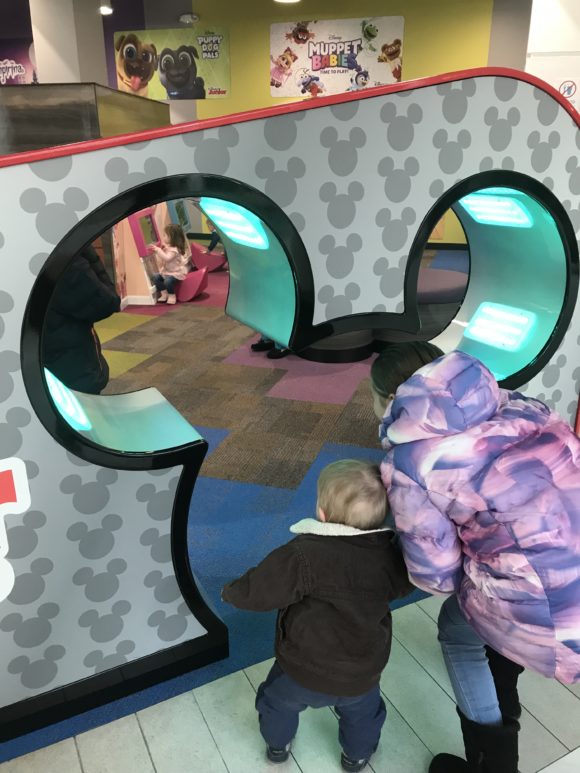 This Disney Junior Play Zone, near me, is located in the top floor of the Menlo Park mall near Nordstrom. It’s completely free and open when the mall is open. I think children 6 and under will have the most fun, although my almost 10 year old enjoyed playing with her little brother.