I was honored to be invited to the #BeOurGuestEvent, a Disney press junket for Beauty and the Beast, Moana Bluray, and other Disney and ABC TV programming. As a guest, my expenses were covered in return for a series of articles about my experiences and reviews of the programming.

Almost 8 years ago, I had a party business. We had superheroes and princesses who would come out with me to birthday parties and community events. Those princesses would move among party rooms and baseball fields. They would engage each child in conversation, pose for pictures, and make them feel special. After parties, they would blog about what it was like to meet this child or that one. Even as an adult, it was mesmerizing to watch how a dress can transform a young woman to a princess and the affect a princess can have on a child. I could not have imagined then that years later I would have this growing thriving blog, Jersey Family Fun, and that by having this and all of you to support it I would be heading off to LA for the Disney Beauty and the Beast Be Our Guest Press Junket this weekend. BUT I AM.

I am thrilled to be attending the Disney Beauty and the Beast Be Our Guest Press Junket. Keep reading to learn why I am so excited and how YOU can join me in the excitement.

Making New Friends….
Twenty-five bloggers were invited to attend the Disney Beauty and the Beast Be Our Guest Press Junket. While I recognize a few of the names, I’ve never gotten to sit down with these fabulous ladies to get to know them. I’m excited to learn more about them and their passion for blogging and Disney. Take a look at the mom bloggers who will be joining me on my trip.

I’m sharing their articles about this exciting Disney press trip as well.

Visiting the Walt Disney Studios, ABC Building, & more ….
I arrive in Los Angeles Saturday afternoon! After a quick stop at the Sheraton Universal Hotel our action on the Disney Beauty and the Beast Be our Guest Press Junket begins.

Have you ever been to these locations? I’d love to hear your thoughts on what it’s like and what questions do you want answered. In fact, keep reading because I will need YOUR questions all weekend long.

Watching Disney movies and shows ….
Our goal for the Disney Beauty and the Beast Be Our Guest Press Junket is to generate buzz and excitement for the new and upcoming Disney movies & ABC shows. We’ll screen movies and previews that will be great for family movie night at the movie theater and nights around the TV. We’ll also see shows that are better for mom and dad to watch after the kids go to bed.

Beauty and the Beast opens in theatres on 3/17

The story and characters audiences know and love come to spectacular life in the live-action adaptation of Disney’s animated classic “Beauty and the Beast,” a stunning, cinematic event celebrating one of the most beloved tales ever told. It is the fantastic journey of Belle, a bright, beautiful and independent young woman who is taken prisoner by a Beast in his castle. Despite her fears, she befriends the castle’s enchanted staff and learns to look beyond the Beast’s hideous exterior and realize the kind heart of the true Prince within.

Click over to see our Disney’s BEAUTY AND THE BEAST Movie Trailers, Behind the Scenes Features & More

The Catch will return for Season 2 on Thursday, March 9th at 10/9c

About the hit ABC show THE CATCH

“The Catch” is a sexy, scintillating game of cat and mouse between L.A.’s top private investigator, Alice Vaughan (Mireille Enos), and the man she loves, Benjamin Jones (Peter Krause), the world’s most formidable con artist. At the beginning of season two, con man Benjamin Jones has gone from committing the ultimate betrayal to performing the ultimate sacrifice, when he turned himself in to the FBI to save Alice from wrongful imprisonment. Now in jail, Ben is forced to reckon with his criminal past, while the team at Anderson Vaughan Investigations must come to terms with getting in bed with the bad guys. How will Alice and Ben game the system — and each other — to stay together and overcome their less-than-legal pasts?

The season six premiere will pick up three months after the finale, and Ben is still enthusiastically searching for the mysterious Elle. Danny and Riley are hunting for a good doctor to help with the pregnancy, and Bonnie desperately wants to be involved. Tucker is back from Los Angeles, but he refuses to tell anyone what happened while he was there.

Tangled: Before Ever After premieres Friday, March 10th at 8/7c

About the new Disney Channel show TANGLED: THE SERIES

The TV movie, which kicks off the highly-anticipated premiere of “Tangled: The Series” (debuting Friday, March 24th at 7:30/6:30c), unfolds as Rapunzel acquaints herself with her parents, her kingdom and the people of Corona. Her irrepressible spirit and natural curiosity about the world lead her to realize that there is so much more she needs to learn about the world and herself before she can assume her role as Princess of Corona.

About the In-Home release of MOANA

Three thousand years ago, the greatest sailors in the world voyaged across the vast Pacific, discovering the many islands of Oceania. But then, for a millennium, their voyages stopped – and no one knows exactly why. From Walt Disney Animation Studios comes “Moana,” a sweeping, CG-animated feature film about an adventurous teenager who sails out on a daring mission to save her people. During her journey, Moana (voice of Auli‘i Cravalho) meets the mighty demigod Maui (voice of Dwayne Johnson), who guides her in her quest to become a master wayfinder. Together, they sail across the open ocean on an action-packed voyage, encountering enormous monsters and impossible odds, and along the way, Moana fulfills the ancient quest of her ancestors and discovers the one thing she’s always sought: her own identity.

Click over to see our collection of Disney’s MOANA articles

Born in China opening in theatres on 4/21

About the new Disneynature film BORN IN CHINA

Disneynature’s “Born in China” ventures into the wilds of China, capturing intimate moments with three animal families: a doting panda bear mother who’s guiding her growing baby as she begins to explore, a two-year-old golden snub-nosed monkey who feels displaced by his baby sister, and a mother snow leopard who faces the very real drama of raising her two cubs.

“Andi Mack” is a contemporary, coming-of-age story about a relatable girl who’s trying to determine where she fits in — and the many amazing ways she can live her life. Andi has been raised to live on the safe side but on her 13th birthday, she takes off the proverbial training wheels and eagerly goes headlong into her teenage years. At every twist and turn, she’s anchored by a loving albeit complicated family and her loyal best friends, Cyrus and Buffy.

Imaginary Mary is the newest ABC comedy about a fiercely independent career woman (Jenna Elfman) whose life is turned upside-down when she meets the love of her life – a divorced father with three kids. This triggers even more upheaval when the slightly unhinged imaginary friend (voiced by Rachel Dratch) she created as a child suddenly reappears to help her navigate the transition from single girl to a woman ready for a family.

Interviewing talented actors, musicians, and directors ….
This is where I’d love your help, yes YOU! Look at this impressive line up of actors, directors, producers, and just all around amazing talent. If you were in a room with them face to face what would you ask them? Let me know. Comment below with your questions. Send me an email at [email protected] or email us through our Jersey Family Fun Facebook page. Heck you can even send me a tweet tagging @Jerseyfamilyfun. Or join me on Facebook Thursday, March 2 at 6:15 pm Eastern Time. I’ll be doing a brief Facebook Live session to take your questions. I want to hear from YOU and YOUR KIDS. Start sending over your questions so I can get some answers, the sooner the better. 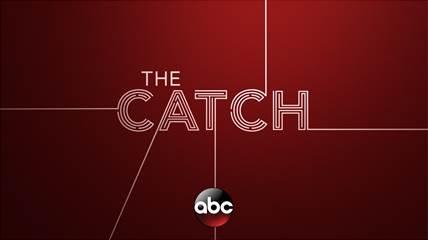 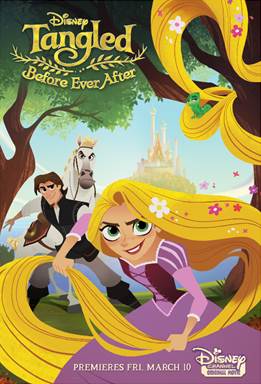 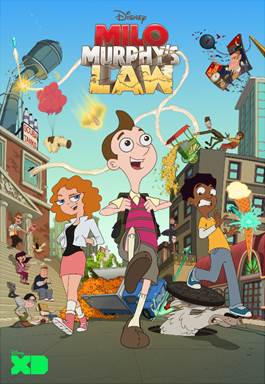 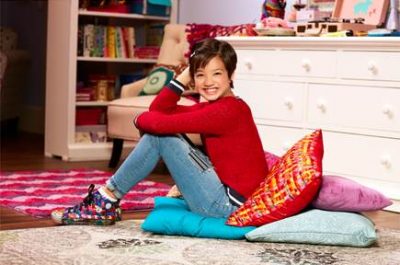 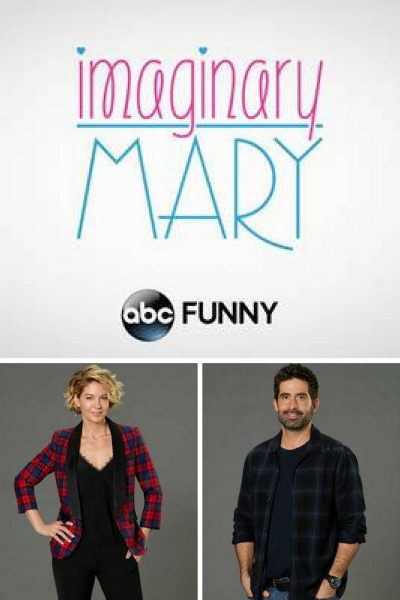 Beauty and the Beast inspired cooking and crafting ….
Sunday night we’ll join Williams Sonoma in their Beverly Hills location for a BEAUTY AND THE BEAST themed blogger event where we will snack on Soup Du Jour, Meat Ragu, Cheese Soufflé, etc. We’ll learn how to cook with Williams Sonoma cookware and will learn how to make paper roses inspired by the movie! 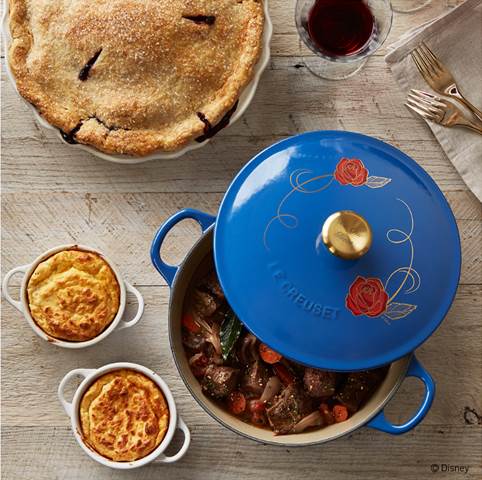 Williams Sonoma, in partnership with Le Creuset, is announcing its first collaboration with The Walt Disney Studios. The kitchenware retailer is debuting an exclusive Disney’s Beauty and the Beast Soup Pot by Le Creuset to coincide with the release of the live-action adaptation of the 1991 Disney classic. The limited edition blue-enameled cast iron soup pot is decorated with the signature Beauty and the Beast rose with an oversized gold knob bearing the inscription, “Be Our Guest.” The limited quantity of five hundred pots is available for purchase at williams-sonoma.com, lecreuset.com and Le Creuset Signature Stores. Williams Sonoma stores nationwide will also host events celebrating the film’s release in partnership with Le Creuset.

You can follow along with me  ….
So much of what we do as bloggers and influencers is online. We’re on Facebook, Instagram, Twitter, YouTube and more. What makes this Disney Beauty and the Beast Be Our Guest Press Junket especially exciting is that you, our readers, and fans can follow along wherever you are. If you’re at home entertaining a little one, waiting in the carpool lane at school pick up, stuck in line at the grocery store, or looking for a fun excuse to waste time before lunch, you can watch these hashtags and participate. Share with me your comments, questions, and excitement.

Other exciting press junket activities to look for

I can’t wait to share with you my stories from the Disney Beauty and the Beast Be Our Guest Press Junket, but don’t forget I want YOU to be a part of them. Please comment below with your questions and what you want to know.

See you soon! It's going to be a busy but exciting few days.

Looking forward to meeting you soon. It's going to be a great event for sure.