In full disclosure we were given 4 passes to the Boston Tea Party Ships and Museum by Historic Tours of America. We appreciate their support of Jersey Family Fun’s visit to Boston. As always, all opinions are our own.

The Act That Led to the Revolutionary War

It goes without saying that Boston has no lack of sites where important and groundbreaking historical events occurred. From the early settlers to the 20th century, there’s something noteworthy on almost every block. Of course the Revolutionary War era is well represented in Boston but few places let you actually recreate events. That’s where Historic Tours of America’s Boston Tea Party Ships and Museum fits in!

When you arrive at the Boston Tea Party Ships and Museum, the revolutionary characters milling around tell you you’re in the right place. The building is located on the Congress Street Bridge, and the two authentically restored tea ships are anchored right in the river! It’s a picturesque location with an interesting blend of colonial and modern views.

The actual location of the infamous tea party is elsewhere in Boston, but also on Boston Harbor. Tickets are timed, so that you can take the tour of the ships and museum at the pace set by the guides. If you arrive early, no worries as there’s a gift shop with unique items open for you to browse. The Boston Tea Party Ships and Museum experience takes just over an hour both inside and outside and it is interactive, educational, and fun! Join along as the night of December 16, 1773 is recreated.

Your first stop is to the Meeting House! Here, guests get a feather, and a card with the identity of a Tea Party participant, given by a guide who stays with your group the entire experience. Ours was a fun woman named “Priscilla,” after an actual historical figure. After some education about 18th century meeting protocol, the meeting gets started. Down with King George! Huzzah for independence! The actors make it fun and interactive, and make sure you know who your assigned Tea Party participant is because you might get called out! Wear your feather because the participants were disguised as Mohawks.

Two colonial tall ships are harbored at the museum and you’ll get to board one for the “main event.” The ships don’t leave the dock. After some rousing You’ll be given a chance to “throw the tea” overboard as well as explore the ship. Ships were small and 340 chests were dumped that night by 150 men. After you exit the ship, the guide gathers everyone on the deck to look at the second ship, and talk more about the participants. Educational signage on the deck delves further into the history of the night.

After exiting the ship and the deck, the tour moves inside for some high tech experiences. (No photos allowed inside.) Watch a short movie starring holographic colonial women – so lifelike you will really question if they are there in front of you! When they finish their discussion of the evening’s events, the second room will surprise you as well. In this room is an actual tea chest from the 1773 event.

The history of the “Robinson chest” is well documented, and is only one of two surviving chests from that night. But that’s not all, watch as the portraits on the wall engage in a debate which again will leave you questioning  – just HOW do they do that? One last room shows the film “Let It Begin Here.” The film shows the next steps on the road to the American Revolution as it documents the lead up to the Battle of Lexington in the wrap around theater. It feels authentic and after recreating the Tea Party, you’ll feel like you can fully relate with the patriots.

After your experience, take some time to have tea in Abigail’s Tea Room, where you can play some colonial games available on the tables, or just get a snack in the outer area. The official tour is over but soak in some more of the revolutionary feel at Abigail’s. My family enjoyed the Tea Party Ships and Museum, for its interactive aspect and its educational value. For more Historical Tours of America activities in Boston, read our review of Old Town Trolley Tours. For more information from the Boston Tea Party Ships and Museum, visit their site.

Click over to see the rest of our Family Travel to Boston series for help in planning your Boston vacation. 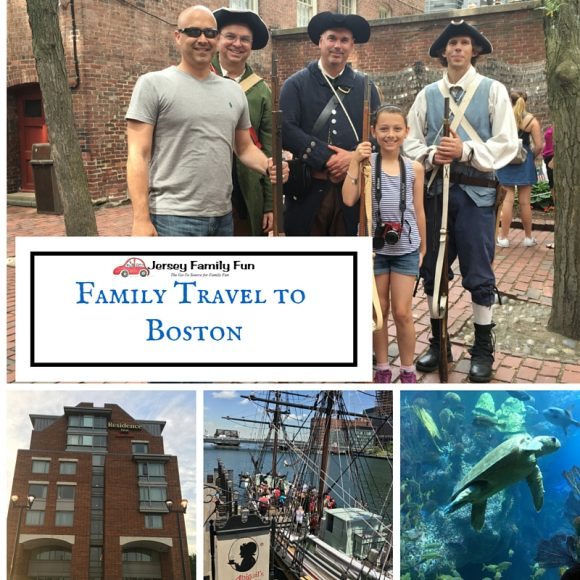 In full disclosure we were given 4 passes Boston Tea Party Ships and Museum by Historic Tours of America. We appreciate their support of Jersey Family Fun’s visit to Boston. As always, all opinions are our own.