I was honored to be invited to the #BeOurGuestEvent, a Disney press junket for Beauty and the Beast, Moana Bluray, and other Disney and ABC TV programming. As a guest, my expenses were covered in return for a series of articles about my experiences and reviews of the programming.

Last week, I started sharing the experiences I had during a wonderful visit to LA to celebrate the release of Beauty and the Beast in theaters and a number of other Disney movies and shows as well as ABC shows being launched or returning to TV. You can find all our stories, past and upcoming by clicking on #BeOurGuestEvent. 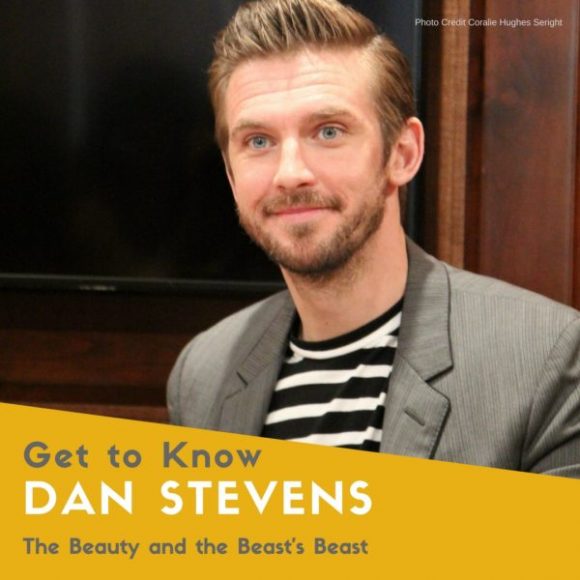 Avoid waiting in lines at the theater or having tickets sold out. Buy your Beauty and the Beast tickets in advance by clicking HERE to buy your tickets through Fandango.

I am sure it can be difficult to spend all day going from room to room being interviewed about your latest role in a film. If it was for Dan Stevens, Beauty and the Beast’s Beast he didn’t show it. He came into the room all smiles and loved the applause and cheers we gave him. He referred to is as being beautiful. While Dan may play a ‘beast’ in Beauty and the Beast, it was clear through our interview that he is quite intelligent and respectful when it comes to respecting women and in particular Emma Watson. He is anything but a beast. 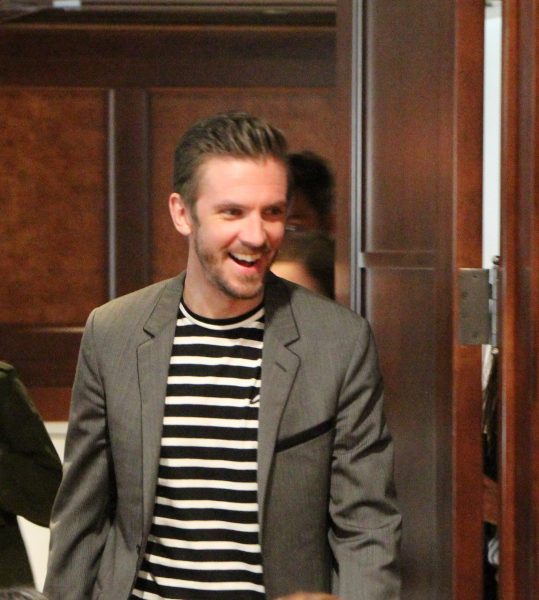 Dan says, about our applause when he walked into our room for the interview, “This is beautiful.” Photo Credit Coralie Hughes Seright, LovebugsAndPostcards.com

How did Dan Stevens audition for the role of the Beauty and the Beast’s Beast?


Singing is critical for playing a role in such a well know animated classic musical. Just as Emma Watson needed to put together an audition tape, so did Dan. He says about his audition, “I put a song on tape for, for Bill Condon. I sang the Beast song from the Broadway musical which we end up not using in the movie, because the Beast doesn’t sing in the animated film. Fortunately, he {Bill Condon} liked it.

What was Dan Stevens’ reaction to dressing as a Beast?

After complimenting Emma about how she looked stunning as Belle, Dan began to talk to us about how he made the transformation to the Beast and what that was like.

“I didn’t really have a costume. Well, I did have a costume, the ones made for the Beast. They were really giant coats that he wore, and this massive shredded cloak, but I never actually got to put it on. I spent the whole time, as the Beast, in a forty-pound muscle suit on stilts covered in gray Lycra. I looked pretty odd, but nothing like the Beast that you see in the movie.

The Beast (Dan Stevens) in Disney’s BEAUTY AND THE BEAST, a live-action adaptation of the studio’s animated classic which is a celebration of one of the most beloved stories ever told.


How did Dan Stevens, or rather his daughter, get to influence the Belle’s dress?

This is a funny and sweet story that came out of the interview with Dan Stevens and Emma Watson. It showed us just how genuine both Emma and Dan are. Read on as Dan explains it.

“During that extensive design period, Emma came over to my house in London for dinner, and we were talking about the dress…And what the dress was gonna look like, and my five year old daughter at the time sort of overheard our conversation, and she scurried into the next room with a pen a paper and came back about a half an hour later with five different dress designs.”

As moms who could relate, we all let out a collective aww.

Emma was very, very sweet. She sat down with Willow and she looked through them all, and they chose which one they thought, you know, that they should go with. Anyway, a few weeks later, Willow came on set and saw Emma in the finished dress, and she’s said ‘yes, that’s the one.’  So in her mind, she designed that dress. 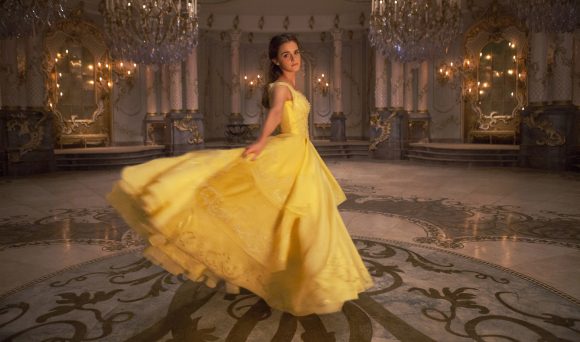 Emma Watson as Belle in Disney’s BEAUTY AND THE BEAST, a live-action adaptation of the studio’s classic animated film.

How did Dan Stevens develop his character, the Beast?

Later on in the interview with Dan Stevens and Emma Watson, Dan elaborated on just what went into becoming a beast and how involved it was.

“In answer to your earlier question, it’s all me, kind of. There was motion capture puppeteering of the suit. I’m inside a giant muscle suit on stilts, so the Beast’s body was me moving inside there. The facial capture was done separately, and every two weeks, we’d go into this booth, and 10,000 UV dots would be sprayed on my face. Twenty seven little cameras would capture everything I’ve been doing for the past two weeks just with my face. It was my face driving that Beast’s face and they turned that information digitally into the Beast’s face and mapped it onto the body that I’d been working on on the set.”

In answer to your question, lots of CGI and also, it is me driving it all and it’s an amazing new technology that’s never been used this extensively before, and it’s very, very exciting. 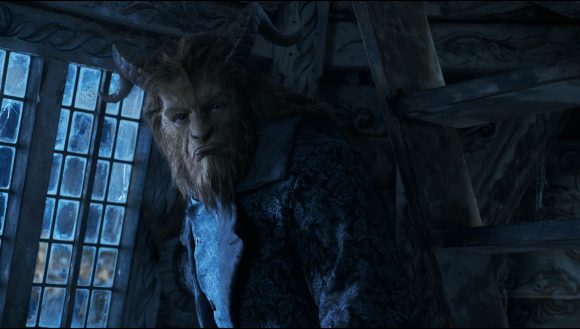 Belle (Emma Watson) comes to realize that underneath the hideous exterior of the Beast (Dan Stevens) there is the kind heart of a Prince in Disney’s BEAUTY AND THE BEAST, a live-action adaptation of the studio’s animated classic directed by Bill Condon.

“I suppose, the most iconic scene that we were really looking to replicate, {is the waltz.} And the feeling of the waltz, I highly recommend you all go and try it. Take a partner; go and take a waltz lesson. It’s an amazing feeling when you get it right and there’s something about the sort of swirling motion of two people doing that, especially in stilts which is quite weird.  (We all had a laugh over that one. Can you imagine waltzing for a movie, let alone on stiltz?) But it was very satisfying to have completed that sequence and feel like we captured the magic of that original dance.”

Belle (Emma Watson) comes to realize that underneath the hideous exterior of the Beast (Dan Stevens) there is the kind heart of a Prince in Disney’s BEAUTY AND THE BEAST, a live-action adaptation of the studio’s animated classic directed by Bill Condon.


Here’s where we learned about the kind of gentlemen Dan Stevens really is. While Dan joked, “I think I made you {Emma} laugh just by being in this monstrous, monstrous, muscle suit on stilts.” Emma explains there was more to it than that.

That’s true. I mean, I think, honestly, the dance scenes are very bonding because, when you’re this close away from somebody else’s face it’s kind of awkward. You’re trying, it feels very intimate, and you don’t really know that person. It forces you to break down a certain number of barriers that would be there without that. I think also Dan is a feminist in his own right.”

“I actually found out on this tour, which I can’t believe he never told me, but he was one of the first people to review Caitlin Moran’s, How to be a Woman, which was one of the books I chose for my family’s book club. He wrote a review of it for one of our English newspapers. Coming into the project he was, so excited by the speech I’d given at the UN, and he wanted to make sure that we were collaborators in exploring the masculine and the feminine energies that are in this movie, how to celebrate them both; how to serve them both; how to make sure that they interact in a way which is really dynamic and fun for people to watch. … I think all of those shared interests- books; our conversations about feminism, he was a dream collaborator.” 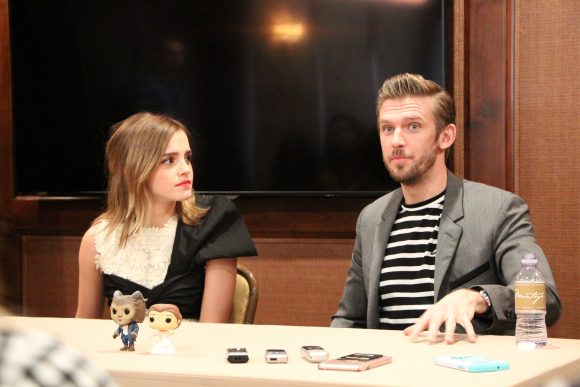 
“I remember even for me, the animated film as being a Disney film that was immediately loved by boys and girls. I actually have a great friend of mine who’s now in his mid-thirties. He grew up in the west of England in the countryside, who for him, Belle was his greatest hero, and he used to go into the fields of Somerset and sing, I want to venture in the great wide somewhere: there’s something about the spirit of Belle that is to be championed in all of us. I think that curiosity, that imagination, that ability to see beneath the surface deep, but also to see beyond your immediate surroundings. She has tremendous vision in all ways, and I think that’s something to be applauded.”

It was really fascinating to see this side of Dan Stevens in our group interview with him and Emma Watson. Their answers were so very enlightening to all of us. Remember, you can click over to here, to read about our interview with Emma Watson. 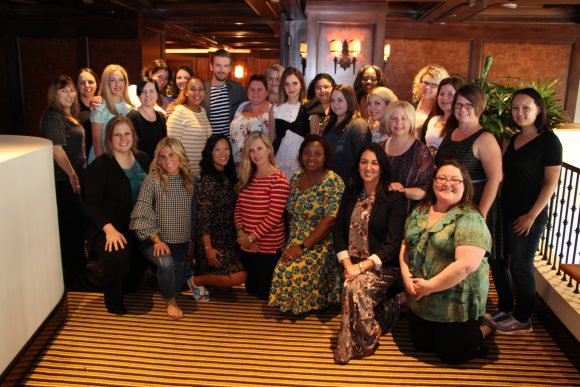 Photo taken during our interview session with Emma Watson and Dan Stevens. 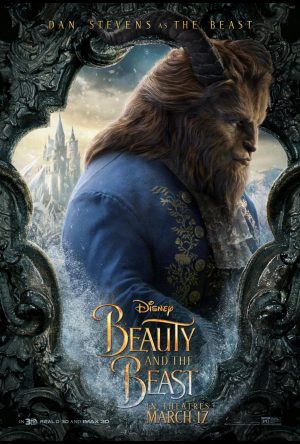 Watch Beauty and the Beast THIS FRIDAY at your local theater!