Atlantic City is getting a professional football team!

YES! Football is coming to Atlantic City. The press release arrived in my inbox a few days ago and I might have squealed loud enough for the neighbors to hear. I am sure they were confused.. but if you’ve been following Jersey Family Fun for any period of time you know we are dedicated to finding YOU the best ways to have fun across New Jersey. I am always excited when there’s something new for kids to do or another place to go in New Jersey. But when it’s in my backyard..Atlantic City.. that’s the cherry on top of an ice cream sundae.

I moved from North Jersey to South Jersey in my early college years. While I left for two years to finish college in Rhode Island, it was South Jersey I always came back to. I’ve spent summers on the beach, worked in the casinos, and have taken my kids to all the Atlantic City family attractions. I’ve even cohosted an overnight blogger trip in Atlantic City to show off the area to influencers and their families. Atlantic City is a part of me and every time there’s something new here for families it’s a cause for celebration. So needless to say when I learned the Arena Football League was expanding to Atlantic City I was overjoyed.

There aren’t many details about the arena football in Atlantic City but I will share with you what I know and 5 reasons I’m excited about a football team coming to Atlantic City. What we know about Arena Football in Atlantic City

The Arena Football League (AFL) officially announced its expansion to Atlantic City, N.J. last Tuesday. The Team, which will be operated by Trifecta Sports and Entertainment (TSE), has not yet been named. More about that in the details below.

“We are thrilled that Atlantic City will be the next great arena football town,” said Monumental Sports & Entertainment Chairman and CEO Ted Leonsis.

As excited as I am about football coming to Atlantic City, the deal is not yet final. It is subject to final approval and execution of a license agreement with the Casino Reinvestment Development Authority (CRDA). UPDATE: CRDA unanimously passed the measure to enter a 3-year public/private partnership with the Arena Football League to bring a team to Atlantic City. The team’s operating management group, TSE, also operates the Philadelphia Soul and Albany Empire. TSE is owned by a group of businessmen including Philadelphia Eagles South Jersey’s own Ron Jaworski, John Adams, George Hearst III, George Manias, Craig Spencer, Dan Nolan, Ed Swyer, Dick Vermeil, Marques Colston and Jahri Evans. This group was put together to operate Arena Football League teams and make them successful and thrive. Manias will oversee operations for TSE, including those of the Philadelphia Soul, the Albany Empire and the launch of Atlantic City’s new team.

“I couldn’t be more excited that Arena Football is coming to Atlantic City,” said Ron Jaworski, AFL Executive Committee Chair and TSE Owner. “We are going to bring a family friendly affordable entertainment product to AC, and bring a team that will become an integral part of the community, giving people in the area a team to be proud to call their hometown team.”

As a local and a mom, I couldn’t be more happy to hear that. 5 Reasons to Get Excited about Arena Football in Atlantic City

Atlantic City is home to many family attractions. Climb the Absecon Lighthouse. Walk through the Atlantic City aquarium. Ride the rides at the Steel Pier Amusement Park. Catch an iMax movie for kids, tweens, or teens at the Tropicana IMAX theater. Play video games at a few different arcades for kids or swim in an indoor heated pool. Harrahs, Tropicana, and a few other Atlantic City resorts offer that. Take a short cruise around the city to watch the dolphins. Take in exhibits from local artists at two Noyes Museum of Art galleries in Atlantic City, where admission is free. Read about them here. Or venture to the next town over and walk through Lucy the Elephant. 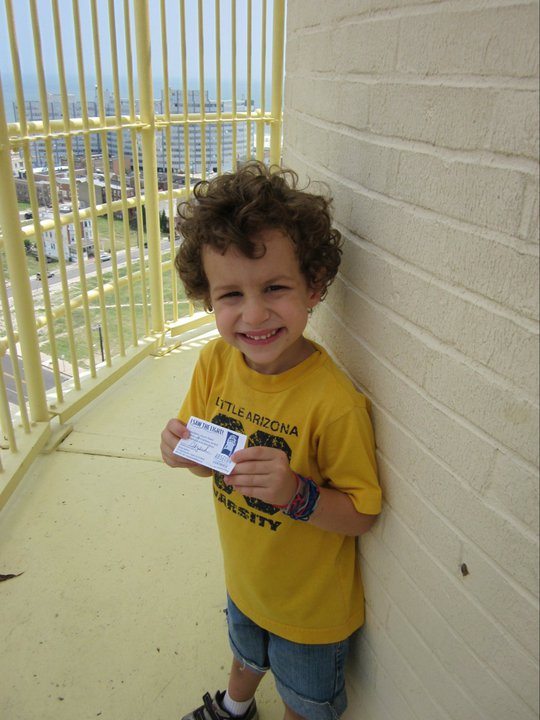 Climb the Absecon Lighthouse to warm up for the Atlantic City football games.

We can help name the team!

The Arena Football League needs help naming the team! How cool would it be to have the bragging rights to say you named the Atlantic City football team?! Any fan can submit a suggestion for the new team’s name.

Don’t wait to enter your suggestion. If the winning team name was submitted by multiple fans, it’s the one who submitted it first that wins. The final name choices will be selected and subsequently made available for fan vote. The winning name will be announced a few weeks after the voting period has ended and the winner gets a prize.

The winner that names the team gets

From the team’s website I learned kids who play football can have football experiences with the Atlantic City football team players and coaches. The Arena Football League’s Junior Football Academy for kids ages 6 through 12, is designed to provide kids with a once-in-a-lifetime football experience while also teaching them a wide variety of football’s fundamental skills from players and coaches. The program will run from April through August (coinciding with the 2019 AFL football season). Learn more and sign up for announcements here. A dance team for the Atlantic City football team will be made up of local young dancers!

On the same page of the website, I discovered the Atlantic City football team will have a junior dance team. Junior dance team members will get a PRO Dance Experience that includes professional choreography and instructors, uniforms, headshots, a Junior Dance T-Shirt and more! The Junior Dance Team will perform at select home games in front of thousands of fans at Boardwalk Hall! For girls ages 6-18 (Must be a high school senior or younger). Visit here to learn more and sign up for announcements. I could totally see this cutie, my friend’s daughter joining the Atlantic City football Junior Dance team and dancing on the field during home games. Photo credit K. Mastro

Grab a group and save

While it’s not clear how much tickets will cost to see the football team in Atlantic City, group pricing is listed on their website. It looks like tickets start at $10 for a group of 10 or more. Grab a few friends and their kids and make it a fun affordable outing in Atlantic City. Atlantic City has gained some momentum and I hope to see it continue with even more things for families to do in Atlantic City.

The Atlantic City Arena Football League will begin this spring. It might only be a few weeks from now, but we certainly can’t wait. How about you?