This post was sponsored by The Penn Museum who are provided us with complimentary
admission. We appreciate their support of Jersey Family Fun that allows us to share with
families information about Philly museums and local overnight adventures families might enjoy.

When I was in my twenties I was a Girl Scout leader. Together, with my co-leader who took our troop of girls on many overnight adventures to museums and camping grounds throughout New Jersey and Pennsylvania. It was something I couldn’t wait to start doing with my own children. Now, my two oldest are finally of the age when they can. So far, we’ve visited the Penn Museum for their 40 Winks with the Sphinx overnighter. Soon we’ll visit the Academy of Natural Sciences for their Safari Overnight. This blog post is about our 40 Winks with the Sphinx otherwise know as the night my son became Indiana Jones. 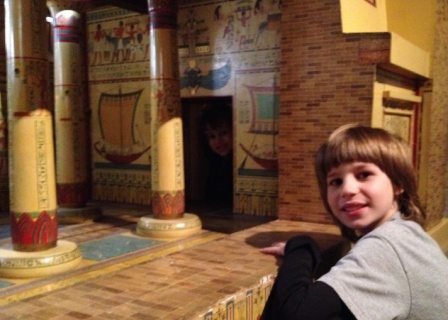 My 9 year old can be hard to please or entertain. As, I packed my 9 year old and 7 year old in the car to head for the Penn Museum, my 9 year old did not have big expectations. He thought, perhaps, this would be something boring to a big kid like him. As we drove up the Atlantic City Expressway, I started to tell him about the 40 Winks with the Sphinx activities. I told him about how he would learn to write hieroglyphics. He would be able to go around and study mummies. We would be examining artifacts in the dark. In his mind, the wheels started to turn. My little Indiana Jones-wanna-be realized this was his chance. Tonight, he was going to be Indiana Jones in the Temple of Doom…okay the Penn Museum. He was bummed he hadn’t brought a notebook or pencils to document his findings, but was thrilled to find out I had. Then, the questions started coming and he could not wait to get there.

We drove onward to Philly…onward to a night of adventures. 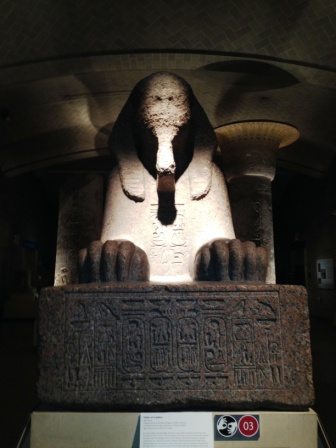 When we arrived for 40 Winks with the Sphinx at the Penn Museum staff were ready for us. We were given our schedules for the night, directed where to leave our snacks and overnight gear, and given permission to explore the Penn Museum. We headed to the Egypt Sphinx Gallery to find our sleeping spots and set up camp. Although, we had wanted to sleep under the Sphinx we chose an area near the wall (I needed the access to the outlet.) The 40 Winks with the Sphinx sleepover has room for up to 175 participants, but the room did not feel overly crowded. It was easy to get around. For my boys, I could not unpack quick enough for them. They were eager to take off and explore.

We headed up to the top floor to explore the Egypt Mummies gallery. We were one of the first to arrive for the 40 Winks with the Sphinx so when we used our free time to explore the Penn Museum it was still pretty empty. On the third floor, my 9 year old was in his element, he went into full Indiana Jones mode. He was no longer a typical 3rd grader. He was now an archaeologist on a mission to learn clues about different ancient civilizations. With notebook in hand he stopped at each exhibit taking notes on the things he wanted to learn. He even convinced me to hand over my camera so he could capture every moment. (He took over 200 photos.) 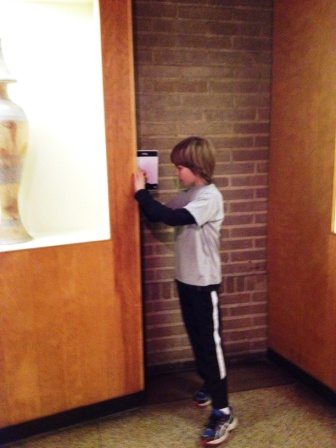 After some exploration, we headed to the auditorium where we learned about the procedures for the night and the 40 Winks with the Sphinx activities. With activities scheduled until 11 pm we were in for a great night of fun.

40 Winks with the Sphinx Sleepover Activities

We did not have to pick and choose one activity over another. I loved that we had time to explore all these activities. We started with making Cuneiform Tablets. Learning how to use the wooden tool and imprint the letters to spell their names was challenging but fun for the kids. It also made me understand why the Penn Museum recommends that children be 6 and older. My youngest son would not have had the patience. My 7 year old gave up a little quickly but instead created a picture on his tablets. The Penn Museum staff were on hand to help. 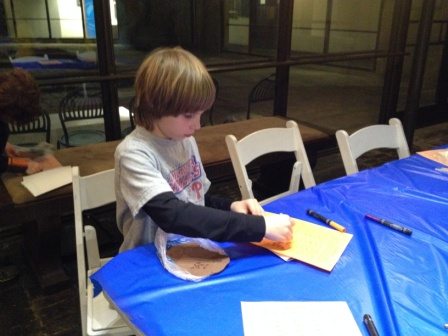 After the Cuneiform Tablets, we went to explore the touchable mummy. My boys were able to ask questions and touch the mummy’s bones. From there, we went on to learn about Egyptian writing, hieroglyphics. Both of my boys were so eager for this activity, we arrived 20 minutes early so they could get a front row seat. (The hieroglyphics talk was offered at designated times, but any seat would have been a good one.) The extra time did allow my boys to ask extra questions. Using the notes at their seats, my boys started trying to write their name. By the end of their class my 9 year old was writing notes to his little brother at home about the Penn Museum. Over the course of the class, we learned how Egyptian writing came to be. Can you imagine if our alphabet had thousands of characters and letters like the Egyptians’ did?

After we enjoyed the activities, we returned to the Penn Museum auditorium with our flashlights. We had a game of What in the World where teams had to guess what certain artifacts were and where they came from. Children and adults took turn on the stage answering the questions. My oldest son volunteered for a turn as well. Although he didn’t get the question correct, he did have fun trying. Our Penn Museum moderators kept the game exciting and moving along.

With flashlights in hand and separated into groups, we headed out on our flashlight tours. The museum lights were dimmed and we explored the different Penn Museum galleries. We were lead by a staff member, but at each stop along the tour a different staff member shared her/his enthusiasm and knowledge for the area of the world that we were visiting.  I was impressed that they could know so much and bring it to a level the kids could understand. My boys and the other campers hung on to every word. 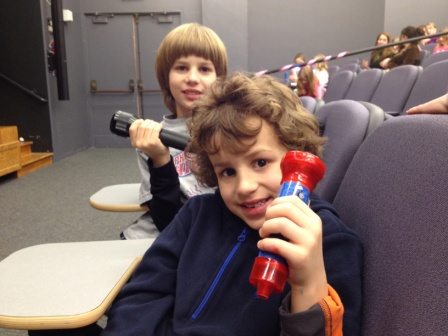 When the flashlight tour was over, we had learned special stories from each of the Penn Museum exhibits. It was quite fascinating even for someone like me who is not usually a history buff. We got our teeth brushed and got settled into our sleeping bags. It took a bit of time for my boys to settle down from the excitement of the night and get to sleep. They were beat from all the fun though.

The next morning of the 40 Winks with the Sphinx we awakened, got ourselves packed up, and headed down for breakfast. There were hot and cold choices: bagels, eggs, muffins, parfaits. There was coffee and tea as well as juices. Campers were allowed to enjoy the museum all day once they had moved their gear out of the museum. Campers also each got a patch so they can come back anytime this year to visit. So while my sons were disappointed we had to leave early for hockey practice, they were happy knowing we could come back anytime.

The 40 Winks with the Sphinx experience is something my boys have never experienced before. It was a magical night of fun and learning. For my oldest, he really did feel like Indiana Jones. As a mom, it was heart-warming to see my oldest in his element like that. He loved every minute of it and hasn’t stopped talking about it.

For more information about the 40 Winks with the Sphinx at the Penn Museum please visit their site you can also visit our friend Barbara at Homeroom at Home for her review of the Penn Museum.

To see our 40 Winks with the Sphinx pictures visit our Facebook Gallery.

You can also view our videos on our YouTube channel.

In full disclosure, this post was sponsored by the Penn Museum who provided us complimentary admission to in order to make this review possible. All opinions are honest and our own and based on our experience.

Wow, this looks like such a fun opportunity...glad to see there was fun for all ages!

This sounds like such a wonderful trip! I wish I would have taken the kids last summer for an adventure! FUN! : )

Barb @ A Life in Balance

This sounds like an awesome trip! I saw some of your photos on Facebook earlier. I'm saving this idea for my GS troop. It sounds like we should wait until they're Juniors for them to get the most out of the program.

Thanks Barbara. I would definitely recommend taking them when they are Juniors. I think they will enjoy it much more then. ~ Jenn

This sounds awesome. My 9 yr old love Indiana Jones and my 12 year old is an explorer. I would love to take them in the summer. Ideas for a scavenger hunt are already brewing. Thank you for introducing us to the Penn Museum.

Our pleasure. Thanks Crystal ~ Jenn

My children would love this! and I think I would have just as much fun as them :P

I think you would to Melissa. - Jenn